Fever Bounce Back to Even the Series

Share All sharing options for: Fever Bounce Back to Even the Series

After spending the entire day before Game 1 "anxious and excited", Indiana Fever Forward Tamika Catchings came into this game with more focus and aggression. The results speak for themselves as she was only one rebound shy of a triple double (19 pts, 11 ast, 9 reb).

In the first quarter Tamika was 5 of 6 from the field and lead the Fever to a 31 to 24 advantage. The Mercury we able to battle back in the second with improved defensive energy but they weren't able to sustain the effort out of the locker room. The Fever's 29 to 18 drubbing in the 3rd proved decisive.

The Mercury again made a run late in the game but were without Penny Taylor who suffered a "lacerated lip" after catching an elbow to the face. With both Taurasi and Pondexter struggling to make their shots, Taylor's offense was sorely missed.

The Phoenix players stepped up their intensity on the defensive end and went on a 14-2 run to close the game to within 5 points with under two minutes to play but while they were getting the stops they failed to make the big shots needed to steal the game.

With the 93-84 win the Fever tie the best of five series at one game a piece and regain the home court advantage.

Katie Douglas on how important this win was for her team, "It was so important. To be able to steal a game on the road, in the WNBA Finals, it's huge."

Games 3 and 4 are Indiana on Sunday and Wednesday and both teams go into those games confident.

The Fever can take pride in knowing that they played Phoenix close in Game 1 and dominated Game 2. They are looking forward to playing in front of a huge crowd. Ebony Hoffman adds, "We knew we could do this. Now we're going to go back home in front of our fans and try to get another game. It is one game at a time right now."

The Mercury haven't had two bad games in a row all season long and Coach Gaines has this added bit of hope, "...if I'm knowing Diana and Cappie when they do have sub-par shooting nights they usually come back vicious."

Cappie Pondexter said before the game that her team needed to bring a full effort for 40 minutes. Both Coach Gaines and his players agreed that their team didn't do that.

"We had lapses where they ran us instead of us running them, they got easy buckets. It happens sometimes to us. If I had the answer to that it would never happen. But I don't," stated Coach Gaines about his team's lack of energy and focus.

Mercury point guard Temeka Johnson agreed, "We brought it for 8 out of the 40, and that can't happen in the Finals."

From the Fever side, Coach Lin Dunn credited her team's defense for holding Taurasi and Pondexter to a combined 11 of 38 (29%). "I thought we did a good job of keeping them on one side of the floor and adjusting our two-man scheme so that it was disruptive to them," said Dunn.

More important from my perspective was the adjustment Dunn made with her rotations. In Game 1 only Briann January and Jessica Moore played over 4 minutes off the bench while in this game the Fever got 12 productive minutes from Jessica Davenport (10 pts). By using another post player off her bench, Dunn was able to continue putting pressure on the Mercury interior defense and have fresher legs to battle on the defensive end and on the glass.

The game was played in front 16,758 fans which is the largest crowd ever to see a Mercury home playoff game. 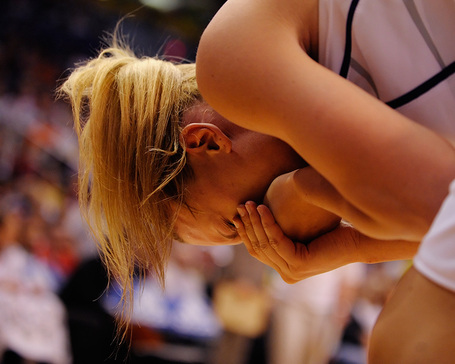 Penny Taylor has been the Mercury's most consistent offensive player in this series. Losing her in the 3rd quarter after taking an elbow to the mouth severely impacted the team's ability to make a come back. Taylor suffered a laceration and is expected to play in Game 3.