The Evolution of the WNBA

Share All sharing options for: The Evolution of the WNBA

The WNBA crossed an important milestone this season: it was the first time the league averaged more than 1 point per possession.

After being fairly flat for several years, the WNBA had it's most efficient offensive season.  Below is chart showing league averages for Points/100 Possessions (A measure of how efficiently teams score), Pace (The number of possessions per team each game), and Pts/G (Which is the result of efficiency multiplied by opportunity: pts/possXposs/g).  As you can see the league scoring dramatically increased in 2006, but that increase came almost entirely from the increased possessions per game due to the change to the 24 second shot clock with only a slight uptick in offensive efficiency.  This season saw a significant uptick in league efficiency as well as a uptick in pace. 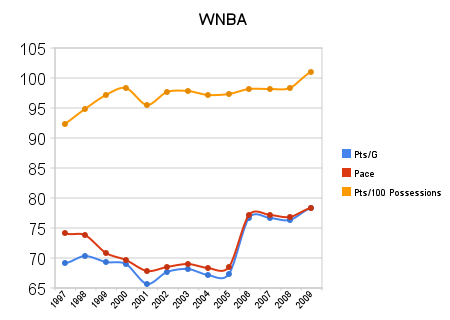 There's also no question that the Phoenix Mercury have had a significant effect in both boosting league efficiency and pace, and thankfully no one can say that you can't win championships playing that way in the WNBA.

In order to take a look at how the league has change in other ways, I charted the Four factors for the WNBA over the years.

The Four Factors split the game of basketball into it's statistical components: shooting measured by effective FG% ((FGM + 0.5*3PA)/FGA), rebounding measured by what percentage of FGA are offensive rebounded, turnover rate measured by turnovers divided by possessions, and the free throw line measured by FTM/FGA (This includes how often teams get to the FT line and how well teams make their FTA).  I decided to include the assist rate, assists/FGM, in additions to the Four Factors because it's a defining trend in the league's evolution. 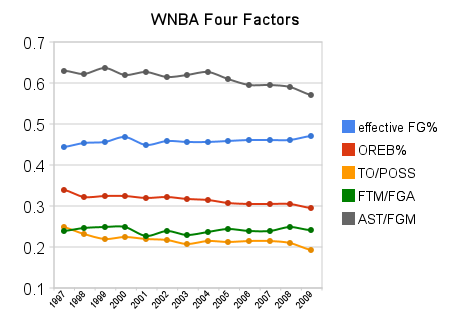 Compared to the NBA over the same period, the WNBA has been fairly stable.

Offensive rebounds and turnovers are gradually trending down, and assist rate has also trended down to the point where it's fairly close to that of the NBA.  WNBA players are getting better and better at creating their own shot, and that increase in shot creation hasn't hurt the league's offensive efficiency at all.

It's clear that the WNBA has been moving away from a college basketball type game towards a NBA style game, and I think that's good for the league.  It may no longer be the game that the fans who fled men's basketball in favor of women's basketball years ago love, but it is a game that NBA fans and basketball fans in general can embrace.

As someone who's watched the WNBA since it's inception, it's been exciting to see so many NBA fans realize that they enjoy the current WNBA, whether it's Q McCall or Phoenix Stan or Bethlem Shoals or my favorite NBA writer and fellow Bulls fan Kelly Dwyer or any other recent convert.  That combined with the level of interaction between NBA and WNBA players seen in social media like Twitter has made me a believer that the future of the WNBA heavily rests with converting NBA fans.  It will never be a replicate of the NBA, but it's reached a point where it's similar enough with the 24 second shot clock and increased offensive efficiency that it's easier for NBA fans to simply appreciate the differences.

And if you're interested in how the NBA has changed over the last three decades look here.