With about three minutes remaining in the second quarter of Game 5 of the WNBA Finals, Tamika Catchings drove the floor for a layup and as she was coming down her hand racked across Cappie Pondexter's face.

Cappie immediately bent over and grabbed her face and stumbled to the side line. Coach Gaines said after the game that he was worried about his star returning since she said she couldn't see out of the eye. During the half time she was examined by the team's medical staff including an eye doctor and was cleared to return.

And return she did. Cappie had 12 points on 50% shooting in the second half of the game including some key late buckets. After the game in the press conference, Cappie had  visible swelling but didn't seem bothered by the injury.

It was surprising then when Cappie announced via twitter that she needed to have surgery. Piecing the tweets together it seems she went to the eye doctor on Monday for a follow up and was surprised when they said she needed surgery.

The surgery was performed this morning and Cappie tweeted that it went well and that she can't play basketball for a month.

The official team press release along with Cappie's tweets indicate that the surgery was performed on her right eye to "prevent retinal detachment in the eye in the future."

"Cappie is a crucial part of our team's championship success, which is evidenced by her performance in both the 2007 and 2009 postseasons," said Mercury General Manager Ann Meyers Drysdale. "We wish her a speedy recovery and know that she will be back on the floor crossing people over in no time."

Phoenix basketball fans know far too much about eye injuries. Last October, Phoenix Suns star Amare Stoudemire was poked in the eye during practice and suffered a torn iris. Later in the season his retina detached and he underwent several surgeries to repair the eye. The injury prevented him from playing for about 6 months and came close to ending his career.

Amare has now vowed to wear eye protection for the rest of his basketball playing days. Perhaps Cappie will do the same.

Cappie seems to be in good spirits and she was certainly looking sharp in this self portrait taken before the surgery. 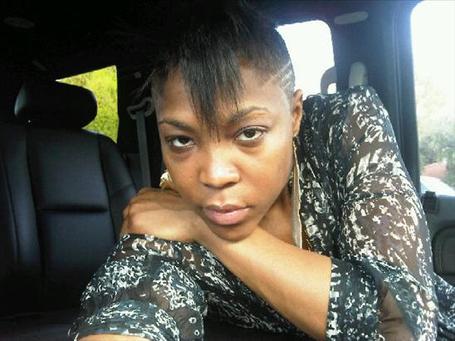