A Post-Gender Championship Series Worthy of Our Respect

Share All sharing options for: A Post-Gender Championship Series Worthy of Our Respect

Sports by its very nature creates winners and losers. Without that our thirst for competition can't be satisfied and our desire to win can't be tested in battle.  These traits are traditionally associated with the male gender. The feminine is considered to be about togetherness and satisfying the emotional needs of others.

What the Phoenix Mercury and the Indiana Fever displayed in the 2009 WNBA Finals was a post-gender view of sports where the best of human athletic potential was on display.

Mercury Coach Corey Gaines talks about treating his team like ball players and not as female players and in doing so is showing them a level of respect.

But that's only part of the equation.

These incredible athletes accomplished what they did over this five game series by leveraging their inherent strengths as women to bring the team sport of basketball to its highest level in ways that men rarely can.

The skill and dedication to be the best combined with the desire to win as a team. That combination is why this league holds so much appeal and provides a completely different kind of satisfaction than the NBA.

Whether it's the Fever's tight defensive rotations and indomitable spirit or the Mercury's incredible ball movement and team unity, the WNBA has proven itself to be different but equal to the NBA.

Of course, team play and great chemistry is not nearly enough to make basketball entertaining to watch and that's where this year's Finals with its amazing collection of super star talent might just be "the tipping point".

When you watch Tamika Catchings fly all over the court and get 5 steals, 2 blocks, 9 rebounds, 6 assists and 16 points you know that you are seeing greatness.

When you watch Cappie Pondexter drive and finish at the rim or pull up and hit clutch shots in the face of an opponent as she records 24 points, 4 rebounds, 2 assists and no turnovers you know that you are seeing greatness.

Desire and chemistry and hard work are good. Individual greatness sells tickets. When you can put them together on the court for a five game series then you have something very special.

Living up to expectations

This final game was hard pressed to live up to the incredibly high expectations created by the epic first contest of the series. In a strange way it both did and didn't deliver. Great players like Taurasi, Catchings, Pondexter and Taylor stepped up and yet Katie Douglas and Ebony Hoffman were unable to hit the shots that their team needed.

In the great debate of offense vs defense the first half was a text book case study for both.

The Fever came out the gate determined not to let Phoenix get into an early rhythm and they applied consistent defensive pressure well out on the perimeter. They denied every pass and trapped every screen and absolutely took the Mercury out of their offense as they held Phoenix to only 16 points on 36% shooting. 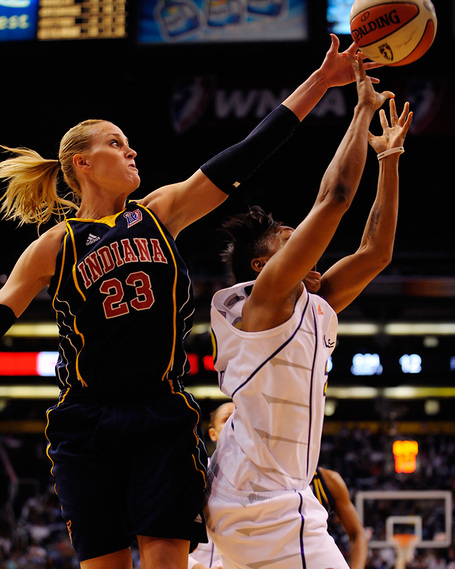 On the offensive end the Fever did a much better job moving the ball from side to side so their bigs were able to seal their defender and catch the pass deep in the post. They had 10 of their 23 points in the paint and another 8 from the free throw line. They were feasting inside and were lead by Tammy Sutton Brown's 14 points in 10 minutes.

It was text book Fever basketball. They scored 6 points off 6 Mercury turnovers and when they weren't scoring quickly they pounded the ball inside. Up 23 to 16 at the end of the first quarter, it looked like they were on their way to their first championship.

But there were signs of life for Phoenix. While they were getting beat on both ends they still managed to out rebound Indiana 8 to 7 and held the Fever to only 4 second chance points.

When the Mercury are not on their game they get killed on the glass. In this game the energy, effort and intensity were there even though Phoenix was struggling to find a rythym.

Coach Gaines explained the first quarter, "When a team goes to the free-throw line against us, it slows us down because the game slows down to a regular style basketball game."

That all changed in the second quarter when the Fever only got the line 3 times and the Mercury put together the best quarter of offensive basketball in this series. Scoring 35 points on 77% shooting the Fever defense was simply out-gunned as Gaines made some adjustments to get Taurasi the ball in better scoring position. She had 13 points in the quarter on 5 for 5 shooting including 3 for 3 from behind the arc.

Fever Coach Lin Dunn took the blame for her team's 2nd quarter lapse, "We substituted some there in the second quarter, and I have to accept responsibility for that. And I think we had some momentum and when we started subbing a little bit, we lost some of that momentum. Looking back, I'm probably going to kick myself  that I subbed. But I knew it was going to a long, hard-fought game. And I was trying to get rotation there, and I think we lost some momentum there, and they went on a run."

That's Mercury basketball. They force you to try and match their depth or risk getting run out of the gym late in the game. You really can't fault Dunn for that decision since her bench play in games 2 and 3 were vital to her team's victories. In this game though the Mercury did a much better job on Briann January and got somewhat lucky that Ebony Hoffman's 70% shooting didn't continue into this game. Add to that a 0-3 performance from Tamecka Dixon that put too much pressure on Jessica Davenport who's 8 points lead the Fever. 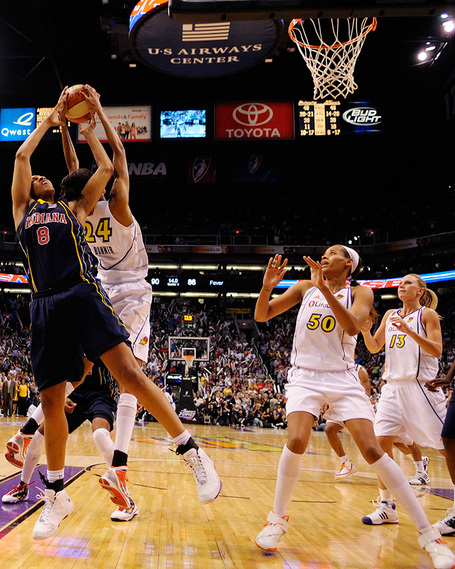 The Mercury took at a 51 to 42 lead into the locker room but despite how strong the Mercury played in the 2nd quarter there was no way the Fever were going to lay down and give Phoenix the championship.

Indiana came out ready to fight and they once again applied the defensive pressure and slowed the game to a crawl. They locked down on the defensive end held the Mercury to only 19 points on 39% shooting but offensively they got away from going into the post which resulted in 4 of their 6 total three points shots for the game but also took away from their ability to get to the line.

Once again, despite having a hard time scoring the ball Phoenix was able to stay even on the boards and limited the Fever to only one offensive rebound. They also took better care of the ball as Cappie Pondexter, who had to leave the game in the 2nd quarter after taking a hard elbow to the eye socket, played 10 minutes and kept Phoenix in the game with 7 points and no turnovers.

It was an important quarter for the Mercury even though they were outscored 23-19. They managed to hold on to a 5 point lead which aside from late intentional fouls was basically the margin of victory. In Game 3 of this series the Mercury had a 5 point lead at the half only to see the Fever go on a decisive 12-2 run to end the 3rd.

In this game, Phoenix was able to focus on the defensive end and do the hard work on the glass and that as much as their great shooting in the second quarter was a big reason for their win.

With a 70-65 lead the Mercury went into the final period of play in front of a sell out crowd of screaming fans. And yet the Fever still played tough defense and held the Mercury to 36% shooting and 20 points (aside from intentional fouls). It was their defense that again let them back into the game but with only 2 Mercury turnovers they weren't able to get the easy buckets they needed to score points.

On the offensive end, Briann January hit a big three followed by a stop and quick high-low pass to Jessica Davenport for an easy layup and suddenly the game was tied at 80 with 4:29 to play.

It is misleading to say that at point it was anyone's game because the momentum that Phoenix had going into stretch and the success and confidence they had shooting the ball all played into what happened next.

Cappie missed a layup attempt but got her own rebound and with the defense out of position found Tanglea Smith at the top of the arc. Tangela pump faked Ebony Hoffman and calmly drained a three point shot for her first points of the game after missing 3 previous attempts.

That three ignited the crowd and the Mercury which carried past yet another Davenport bucket in the paint. Davenport (who didn't play in Game 1) finished the quarter with 10 points and had 18 for game. On the next offensive possession the Mercury ran a high pick and pop and as Cappie drew two defenders on the trap she found a wide open Smith. The 12 year vet who lead the league in 3P% sank yet another crucial three.

Coach Dunn called it a defensive mistake, "There is no way in this world Tangela Smith should have a wide-open 3. You are not going to play a perfect game defensively, but you never, ever leave Tangela."

That gave the Mercury a 86-82 lead which would prove to be the key differential as over the next 3 minutes both teams only managed to score 4 points each.

Perhaps at that point in the series both teams were just too tired to hit those big shots that were falling in Game 1. Both Pondexter and Douglas missed three's that could have changed the game and Tammy Sutton Brown missed a lay-up.

With about 50 seconds to go, the Mercury had the ball and 88-86 lead. Normally, they isolate Cappie at the top of the key and let her go to work. This time though they put the ball in the hands of Penny Taylor. Taylor almost always drives to her right but was forced left by the Fever defense but she was able to draw the foul and hit two free throws to put Phoenix up by 4 points. The Mercury only missed one free throw on the night and were 24-25 in the game. That's championship poise and focus.

In Game 1 Douglas drained a couple of big shots in a similar situation to tie the game and force over time. This time, she was unable to connect and the Mercury held on for their second WNBA championship. 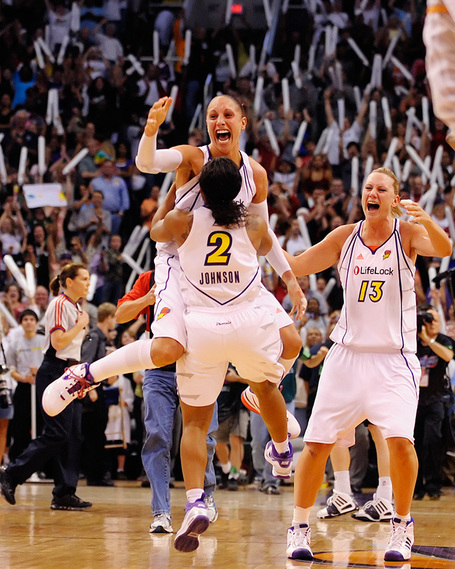