Share All sharing options for: "Welcome to the new frontier": Why the WNBA Needs More Whalen…and Parker...and LJ...and Cappie 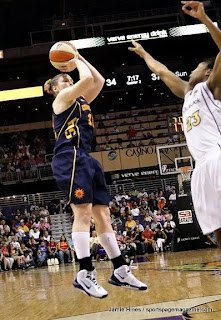 Connecticut Sun point guard Lindsay Whalen is certainly not the most athletically gifted player and she doesn’t necessarily even make spectacular plays, and yet she consistently stands out in almost every game she plays, even to fans who can hardly spell her name.

Sometime during the first half of the Seattle Storm’s 86-74 home victory over the Connecticut Sun last Thursday, Bethlehem Shoals got my attention to show me a tweet from his second WNBA experience (corrected below for your reading enjoyment).

Whalen is such a great PG she doesn’t even need the ball!

While Shoals’ commentary may strike rational individuals as absurd, Whalen consistently stands out in almost every game she plays as in complete control of everything going on around her. She has a presence on the court that is felt even when she is doing things that seem rather pedestrian.

But how exactly do we describe what makes Whalen such a great player?

As I ponder the question, there’s one play from the Sun's 91-81 loss to the Los Angeles Sparks game this past Sunday night that stands out in my mind.

After Tina Thompson missed a baseline jumper with 4:49 left in the 3rd quarter of what looked to be a Sparks blowout, Whalen snuck through a gap in the lane untouched to grab the rebound. Having secured the ball and brushed off Sparks forward Candace Parker’s attempt to swipe the ball from her, Whalen left the 2008 MVP behind and pushed the ball up court at ¾ speed.

As she crossed the three point line, rookie forward Lindsay Wisdom-Hylton was faced with the unfortunate task of trying to stop Whalen. While common sense might tell us that Wisdom-Hylton had no shot to stop Whalen from going to the basket – having already drawn the attention of the defense, Whalen came to a stop just inside of the free throw line and just shuffled a pass to Sun forward Sandrine Gruda for an open jumper on the wing.

She makes basketball look as simple as lacing up our shoes.

Furthermore, it seems that Whalen has made a science of capitalizing on simplest principles of basketball, methodically analyzing a situation to make the best play possible.

To extend the point, even when watching Connecticut Sun point guard Lindsay Whalen in losses, it’s easy to see why she’s a perennial MVP candidate. Her presence on the court is felt, regardless of whether she has the ball in her hands. She’s tough enough to dive deep into the paint for rebounds and graceful enough to make the perfect pass to her teammate for a three pointer. It’s that attitude of winning by any means necessary that makes her great.

On his blog FreeDarko.com, Shoals would later make the claim that the WNBA "needs more Whalen", primarily because of her "attitude" – "She talks non-stop, plays the whole game with a scowl on her face, and stared down the ref at the half." However, I would like to expand upon why the WNBA needs more Whalen while also making a more narrow claim.

Earlier in his article, Shoals made what I think is the far more interesting claim in his article, something that I didn’t quite appreciate when we were caught up in the chaos of Key Arena on Thursday night.

I was serious when I twitted that she doesn't even need the ball to operate masterfully from the point. Depending on how you look at it, it's either quasi-mystical, or the kind of what people used to say about Deron Williams ("he gets hockey assists and stays within the system") before dude came to life, but true.

She gives it up almost as soon as she crossed half-court, or posts up at the top of the key, Cassell-style, but as a way of attracting attention and feeding someone else. And these aren't passes for assists; mostly, they set into motion a series of obvious events (two, three, four passes) that result in an open shot. Her teammates usually miss, and Whalen herself can hit the lane strong and sink jumpers at will, but whatever. She's bigger than that. Closest NBA comparison: Old Jason Kidd, if old Jason Kidd were young and could shoot.

(Speaking of which, last night I decided that comparing NBA to WNBA players is the logical next step of NBA esoterica. Like when Kevin told me "Darko was supposed to be what Lauren Jackson is." These days, everyone knows everything about every random player. If you value elitism and obscurity in your fandom—and buy my argument that the WNBA is a variation on the NBA, not an inferior product like college—then welcome to the new frontier.)

There are players in the WNBA like Whalen, Jackson, Parker and Cappie Pondexter that defy our natural inclination toward NBA comparison. These players don’t really have a NBA comparison unless you start fantasizing about maximizing the talent of superstars. They truly do represent a different, not inferior, style of basketball performance.

To stick with Whalen, the only way to make a NBA comparison is by either idealizing what we wished NBA players to be or somehow trying to play with time and the natural course of development to bring together the athleticism of youth with the savvy of age.

And perhaps that is the allure of Whalen for NBA fans –not only does she exhibit intensity and toughness that people do not normally associate with women’s sports, but she is an idealized image of what we wish our favorite point guards would become.

So it should be no surprise that longtime NBA fans, such as myself, Shoals, Phoenix Stan, and Stan’s guest Wattdogg10 all immediately notice Whalen as standing out as something special when we comment on the WNBA.

Players like Whalen, Jackson, Parker, and Pondexter are truly intriguing basketball narratives unto themselves that any true fan of the sport should be able to recognize as special and appreciate. Again, if you can't appreciate how these players play the game, it might be time for you to abandon basketball altogether.

So to elaborate on Shoals’ point, it’s not just that the WNBA needs more Whalen to enhance the product, but "more Whalen" might actually attract NBA fans simply because she would give them pause and really provide a new vision of the game they love. Ditto for Jackson, Parker, and Pondexter.