On Writing (Part 2): How Might Advances in Social Media Help Women's Sports?

Share All sharing options for: On Writing (Part 2): How Might Advances in Social Media Help Women's Sports? 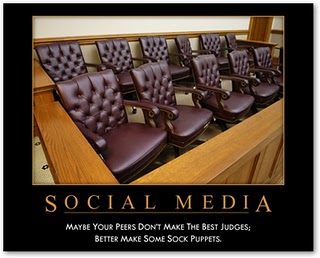 I ended yesterday’s post about "good journalism" as follows and figure it would be a good way to start today’s post:

"Last Thursday, SBNation’s launch of its redesigned website, which includes an innovative "StoryStream" feature, struck me as an interesting lens through which to explore all of these questions.

What strikes me as most significant about SBNation’s approach to sports journalism is that it represents a convergence of the best principles of "traditional" journalism and "fan journalism". Although SBNation has not previously covered women's sports, their model of journalism has potential to enhance the way women's sports is covered."

With that I borrow a pair of questions from an upcoming panel at the University of Minnesota’s Tucker Center for today’s post:

1. Will this technological paradigm shift challenge or reproduce the ways in which female athletes are traditionally portrayed in mainstream sport media?

2. Will the unprecedented popularity of social media—and the alternative "ways of knowing" it provides to traditional media—fundamentally alter how we view women’s sports?

Since SBNation has not previously covered women’s sports, it probably seems odd to use that site as a lens to think about social media and women’s sports. However, consider this comment from a post on the One Sport Voice blog:

The ultimate strategy (for women's sports) then it to is push for more integration of women’s sports into mainstream media, while continuing to carve out a space in social media. That way we ensure women’s sports are not ghettoized in the "opt-in" exclusive space (not everyone has access to the WWW) of social media.

I would suggest that the combination of SBNation’s redesign in addition to its size, readership, and partnerships with major outlets like Google, Yahoo, and CBSSports, is the perfect platform with which to begin the integration of women’s sports into mainstream media.

The infrastructure exists in a site like SBN to accomplish the task of elevating women's sports coverage.

Embedded in SBNation’s redesign is the use of social media to enhance, rather than diverge from, the "excavation" process (as phrased by Stephen King and described in yesterday’s post) that characterizes the activity of good "traditional" journalism. In addition to shifting what is covered as "news", it also has the potential to shift how news about women’s sports is consumed.

As stated in the first paragraph of SBN's statement about the revamped site, it is all about encouraging and facilitating dialogue among fans about things they care about rather than dictating the agenda to follow. Bankoff compares the revamped site to a sports version of Huffington post, complementing rather than conflicting with major media outlets like ESPN.com or CNN/SI.com.

However, the structure of its SportsStream which is a consolidated stream of "the latest news feeds, Tweets, videos, comments that move a major sports story along," according to CEO Jim Bankoff also represents a shift even from traditional online journalism.

Rather than an emphasis on reporting the story of the day, the focus is on multiple perspectives on a given situation that the readership cares about, commentary on those perspectives, and comments on the commentary.

By hypothetically consolidating the voice of the athlete with the voice of the media with the voice of the fan, readers should be able to get a far richer perspective on any given sporting event than they would have by reading any one of those sources in isolation. It is at the cutting edge of how any news is covered, even beyond the sports world. So could it help women's sports?

Can the technological advances of SBN "fundamentally alter how we see women’s sports"?

On one hand, comparing a sports fan-site to a left-leaning political site might seem like a stretch. On the other hand, maybe it’s appropriate for a sports site to be seen in the same light.

Reading Helen Wheelock’s article about Pulitzer Prize winning photojournalist Michelle V. Agins, I was reminded of an excerpt from Raquel Cepeda’s introduction to her book, "And It Don’t Stop", a collection of seminal hip-hop journalism:

Hip-hop journalism built on the tradition of hip-hop as a societal reflector. The hip-hop journalists not only understood, but were themselves participants also aching to be understood…Today would be hip-hop journalists are faced with a challenge to explore the substance beneath the surface. While the writings about hip-hop in the alternative press legitimized the music because it helped identify it to the masses of eighties, and helped our generation define itself within its social and political paradigms in the nineties, we are now being faced with the task of covering more interesting aspects than what the mainstream predicates. And while we’re ushering in the new millennium, writing about hip-hop still has the potential to be used as a conduit for change.

I would argue that women's sports does function as a social reflector with plenty of rich substance beneath the surface of the game.

Furthermore, if you believe Hoopsworld writer Steve Kyler that ESPN influences who is popular and who is not in sports and Huffington Post contributer Casey Gane-McCalla that, "Sports stereotypes have a real effect in the real world," then the way major traditional sports news institutions cover women’s sports has a real effect on women.

Sports journalism – both how it is covered and how it is consumed – matters, especially when it comes to covering women’s sports which have been unapologetically demeaned by the mainstream media.

If you’re like me, this is a sobering commentary on the state of affairs in the U.S. – the free flow of ideas that seems central to a democracy is not necessarily supported by our media outlets in any domain.

Hence the exuberance about social media, mine included.

However, as Nicole Lavoi wrote in her post about social media back in May, there is no empirical evidence to support the claim that social media will single-handedly change the way women’s sports are covered. However, the technological infrastructure of sites like SBN have the capacity to shift the way the women’s sports are covered. The question is how to best take advantage of that.

After all, there is at least one thing that we do have empirical evidence to support: the mainstream "traditional" media is probably not going to shift the way they cover women’s sports any time soon.