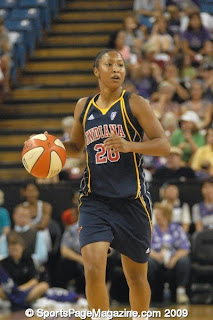 With 2:18 left in the third quarter and her team down 14 points against the Seattle Storm, a light seemed to go on for Fever rookie point guard Briann January.

January brought the ball up court, shifted her weight left just enough to freeze All-Star guard Sue Bird who was defending her, then made a swift crossover dribble and took the ball hard to the basket to draw the foul and hit two free throws.

However, it wasn’t just one play that stood out on Saturday.

January took Bird to the basket repeatedly – she got to the free throw line off a drive again with 6.6 seconds left in the quarter -- and even though she didn’t make every shot, it was her confidence in a game that was still within reach that was impressive.

Although the Fever ended up losing Saturday's game 74-60, January demonstrated a beautiful mix of athleticism, determination, and skill that gave the fans that were still paying attention a glimpse into a bright future. Most of all, demonstrating such confidence against Bird – who January idolized as a young player – seems to just add something special to the moment. It’s not that Bird is a standout defender – it’s that January approached Bird with such fearlessness.

Despite struggling with her jump shot for much of the season – she went 1-8 against the Storm – January is having an impressive season as a rookie point guard. She’s an adept ball handler who can not only get herself to the basket, but also knows when to pick and choose her spots.

Although her passes sometimes go errant when she gets over-excited, she has also shown the ability to make pinpoint entry passes to the post or perfectly float passes over the outstretched arms of defenders to a moving teammate, putting them in scoring position on the run.

And of course, the two time Pac-10 Defensive Player of the Year is no slouch on defense. Her quickness and strength allow her to stay with and challenge even the likes of Bird.

The combination of skills that January displayed in Saturday’s game and the previous Saturday in their comeback win against Detroit is what makes it so tempting to look past the present and into January’s seemingly bright future. The point was underscored by Fever coach Lin Dunn’s comments after January’s career-best performance against Detroit.

"You’re starting to see January develop more and more into what I call a premier point guard in this league. Her strength combined with her quickness, her speed and her shooting ability – I just think that she’s got a lot of upside as one of the top guards of the future of this league."

January seems to exude star potential, both because of her skills and the leadership she exhibits when on the court.

It was somewhat ironic to see January – a 31.8% shooter in her young career – standing up on the sidelines with her arms crossed like a coach yelling, "Shoot it! Shoot it!" as veteran Ebony Hoffman passed up a shot opportunity that came within the flow of the offense.

Although the frustrated eye roll at the dead ball is probably not the most effective way to build relationships, she seems to have the quality of a natural leader, even as a backup point guard. On a successful team full of veterans, she’s not afraid to hold her own and bark commands, even when she’s not on the court running their offense.

And in having such an eye for the game and implicitly demanding so much of her teammates and visibly bothered by every single mistake she makes – but not afraid to
solicit feedback from others – it’s hard not to think that she’s destined to improve.

When you combine her approach to the game and disposition toward her teammates with her skill set, it seems like the sky is the limit for January.

Something I found interesting as I was doing point guard rankings last week is that if you were to omit scoring efficiency – shooting percentages, the ratio of possessions she scores on vs. possessions that she wastes – January’s statistical profile as a point guard is remarkably similar to Lindsey Harding.

Based on the point guard statistics, the only major difference between Harding and January are scoring efficiency numbers. And given Harding’s emergence this season after struggling her first few years, it’s not hard to imagine January having an impact on the court similar to Harding as she becomes a better scorer.

Harding had the better rookie season, but a large part of that was that she started and got big minutes on a non-playoff team. What Harding might have on January in terms of physical gifts – Harding is undoubtedly among the fastest guards with the ball in the league -- January has on Harding in terms of feel for the game and defense.

And I would argue that January is probably the better passer in terms of mechanics and court vision. That’s high praise and a lofty comparison for January given Harding’s all-star caliber year…but I really think she has that kind of potential.

When you start to see the ability to do things for her team at crucial moments on multiple occasions – even if they lose a game on the road in one of the toughest arenas in the league against the second-best team in the Western Conference --- it’s fair to start projecting her as something more special than what meets the eye.

If she does end up developing into a premiere point guard, she might end up in a class all her own. She just stands out as a special individual.

A superstar in the making.

Tony J. Antonucci, January’s elementary school counselor, wrote recently in the Spokane Spokesman-Review that January is "today’s real true all-American superstar athlete" who has been surrounded by a large support network on her ascent to the WNBA. And a portion of that network she’s spent a lifetime building was present not too far from the Fever bench at Key Arena.

As I was leaving Key Arena, January was coming through the tunnel to meet a group of 20-30 people that waited after the game to greet her. As I was walking toward her, she was surrounded by a bunch of credentialed individuals giving her directives or advice of some sort. I almost got out my voice recorder to go over and ask the player I’ve been following for about a week a few questions that would probably only result in answers similar to those in print elsewhere.

Just as I got close, she turned and flashed that "warm beautiful smile" that Antonucci described, wiping away any trace of having suffered a bad road loss, and walked out of the tunnel, greeted by a loud cheer from the people that eagerly awaited to see her.

And at that moment, she seemed to be more than Briann January the future premiere point guard, but Briann January the recent college graduate who was returning home from her first post-baccalaureate job to visit her family and looking for a good homecooked meal from mom.

Indeed, a special set of attributes for a star athlete in today's world of professional sports.