"Got Recess?": Which Schools are Denying Youth Recess? And Why?

Share All sharing options for: "Got Recess?": Which Schools are Denying Youth Recess? And Why?

I am as passionate about youth development as I am about sports.

I even think that the two conceptual spaces intersect: participation in sports – even as the awkward lanky kid who gets picked last – has value for youth development.

So if you ever want to get me really fired up and angry, ask me about any of the following four things:

1. The fact that we live in a nation that seems almost indifferent to the education of our youth.

2. The arrogance of pre-service teachers who treat teaching like it’s day care with better benefits.

3. The semi-professionalization of youth sports, perpetuated by the ridiculous parents who curse and fight at their ten-year-old’s sporting events.

4. The ridiculous trend in our country to remove recess and physical education from schools.

Last night, Gretzky got me talking about trigger #4 by telling me about a July 28th article in USA Today about childhood obesity.

The article refers to comments by Kathleen Sebelius – Secretary of Health and Human Services and a former athlete – about the link between school activity and childhood obesity.

And there are too many schools that don't offer physical education or even recess, she said. "That's not only bad for their health, but bad for their minds."


While I acknowledge that PE definitely varies in its overall effectiveness and quality, I want to focus on schools that deny youth recess, which is a much lower bar: one period of outdoor play (weather permitting) for at least 20 minutes each day, as defined by the National Association for Sport and Physical Health.

But how many schools is "too many", as described by Sebelius? And why should we care about recess anyway?

As a former teacher, it's hard not to care.

A 2006 report from the National Center for Education Statistics found that somewhere between 83-88 percent of public schools have a daily recess period. However, a study of 11,000 third graders released earlier this year found that 1 in 3 students receives fewer than 15 minutes of daily recess or none at all.

Yet the most troubling piece of this research for me is who loses recess:

Children exposed to none/minimal break (30%) were much more likely to be black, to be from families with lower incomes and lower levels of education, to live in large cities, to be from the Northeast or South, and to attend public school, compared with those with recess. 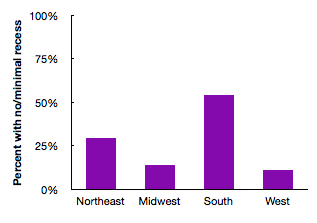 A graph of recess-lacking U.S. schools by region from the Barros study (via Cognitive Daily).

The educrats who endorse this sort of policy will argue that eliminating recess (20 minutes daily) somehow increases academic performance. They might even say something similar to what Benjamin O. Canada, former superintendent of schools in Atlanta, told the New York Times back in 1998:

"We are intent on improving academic performance. You don't do that by having kids hanging on the monkey bars."

I suppose the logic works, if we start treating children like robots whose performance teachers are tuning.

Part of the reason I take this issue so personally is that I taught in a school that banned recess under the same obtuse logic. And I can absolutely promise you that under no circumstances can you make the argument Canada made if you’ve spent five eight-hour days a week with 5-12 year olds.

I taught in an urban, 100% black, Title I school that was a PreK-7th transitioning to a PreK-8th. I worked in the middle school area. Students had class periods of about 50 minutes each and one PE class a week (varying by semester, assuming our teacher had not yet quit). They went to lunch – arms folded in a single file line – in the cafeteria, which was also inside the building.

So from entering our dark windowless hallways at 7:45 until being freed sometime around 2:20 the students did not go outside at all and were under constant supervision.

And oh yeah, we cut nap time for the Pre-K and Kindergarten students as well.

Think that helped academic performance and allowed us to avoid being a "failing school" (for whatever value this arbitrary label holds for you)? Hardly.

But the reasoning was simple (and simplistic) – that 20 minutes daily that most research suggests is as valuable to student development as the 3 R’s was viewed as 20 minutes less of "time on task" preparing for those all-important achievement tests.

Consider this statement from Dr. Romina M. Barros, the assistant professor and pediatrician who conducted the "School Recess and Group Classroom Behavior" study in Pediatrics:

"We need to understand that kids need a break,’’ Dr. Barros said. "Our brains can concentrate and pay attention for 45 to 60 minutes, and in kids it’s even less. For them to be able to acquire all the academic skills we want them to learn, they need a break to go out and release the energy and play and be social.’’

This is not rocket science, or perhaps more accurately, neuroscience. It’s common sense.

In fact, I want you to imagine for a moment what it would be like for a student to not leave a building and be under constant supervision for an entire day.

When you tell the students it’s time to go to lunch for 30 minutes in a gloomy colored cafeteria – complete with D grade food and sugar water – after being in class all morning, they’re going to take that opportunity to be social and release their energy. However, since they are forced to stay in their seats during that entire time -- aside from the time they are allowed to get up and get their food and return their trays – all they do is become more restless. Their capacity to focus declines.

The two hours after lunch were like an intellectual vacuum, especially for the older kids who thoroughly crave both their free time and challenging authority to begin with.

Would 20 minutes of recess really improve academic performance in this sort of panoptic environment? Probably not – there were obviously many problems with that particular "learning" environment.

The problem is that treating 5-12 year olds like this is utterly dehumanizing...unless we strive to create carefully prescribed automata who are programmed to withdraw from the world, as educator William Torrey Harris suggested in 1906.

I could throw endless anecdotal, qualitative, and quantitative data at you to further support the point, but it should be clear:

There simply is not a strong argument in favor of eliminating recess from any school.

And when we consider who is losing opportunities for recess, it becomes even more infuriating because it is yet another example of the deep educational disparities in this country that we are only half-heartedly trying to address.

"The kids who are already disadvantaged in a number of different ways are getting further disadvantaged," said Ripperger-Suhler.

Almost two-thirds of this disadvantaged group had physical activity only twice a week or less, putting them at greater risk of becoming obese.

This isn't just a matter of academic performance, but the health of our children.

But you know, as some commentators have said, maybe all the commotion over the demise of recess is exaggerated. After all, it’s only our (disadvantaged) children’s future.

The original inspiration for this post was actually a post on The Muslim Women in Sports blog two weeks ago about Saudi prince Khaled al-Faisal considering lifting the ban on physical education for girls in state-run schools:

Physical education classes are banned in state-run girls schools in conservative Saudi Arabia. Saudi female athletes are not allowed to participate in the Olympics.

Women's games and marathons have been cancelled when the powerful clergy get wind of them. And some clerics even argue that running and jumping can damage a woman's hymen and ruin her chances of getting married.

Prince Khaled is certainly to be commended for standing up against an entrenched institution on this issue. However, it's worth noting that we're going to need someone to stand up for the fitness of our urban boys and girls in the U.S.

This did not turn into a rant about the 2001 No Child Left Behind legislation, because in fact the reason for removing recess often includes multiple factors according to the International Play Association, many of which applied at the school I taught at:

The No Child Left Behind Act of 2001 created a focus on testing and scripted programs and further decreased recess, especially in high-poverty schools. Pressure is also on early childhood education programs to teach academic subjects at younger ages. The Kindergarten curriculum is now more like first grade used to be. Some kindergarten classrooms have no blocks, dramatic play area, or puppets; and some experienced kindergarten teachers have noted decreases in children's imagination and the ability to organize their own play. There has been a decrease in outdoor play due to many factors including the following: an emphasis on organized sports and other structured activities, fear of neighborhood crime in cities, lack of accessible open spaces in suburbia, working parents wishing their children to remain indoors after school, air conditioning that discourages children from playing outdoors in the summer, and the appeal of electronic media (TV, video games, and computers).

Can you even imagine Kindergarten without recess or blocks (or nap time)?

I did in fact bring up this issue during a faculty meeting in my first year one time. It was brought up by another teacher and I suggested we try having recess. The assistant principal looked at me and said, "Well, who's going to supervise that? You?," alluding to my numerous behavior management problems in my first year.

That effectively killed the motion.

Nevertheless, it should not be ignored that things that tend to make people good humans – like art, music, and PE – are being increasingly cut as schools find ways to trim budgets and increase that cherished "time on task".