Share All sharing options for: Storm – Sun Reflections: Bird the Facilitator vs Whalen the Combo Guard 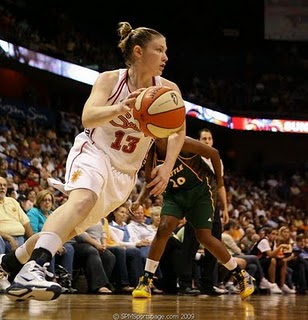 How could I possibly watch a Seattle Storm – Connecticut Sun game and not start thinking about point guards?

In a game that features Storm point guard Sue Bird going up against Sun point guard Lindsay Whalen – arguably the two best point guards in the game -- it’s almost impossible not to dig deeper into the comparison: who is the better point guard?

What makes it so difficult to make a decision is that they really are different players. But that hardly prevents people from making the comparison.

Mike DiMauro of The Day suggests that even Sun fans might have split loyalties as they struggle with their love for UConn that predates the Sun in Connecticut.

But in their own state, the Sun's competition, spoken or otherwise, is UConn. And while the college and pro games are markedly different, there's just no convincing the masses.

So that means that you go beat Bird when she's here. You beat Diana. You get people to notice. Then you do what's truly important and win in the playoffs.

"Ever since the finals in '04, we've had intense games with Seattle," said Whalen, whose 11 points, seven assists and four rebounds were huge. "It's big to beat them. They have Olympians over there."

And one of them is Bird, who remains about as beloved a player as there has ever been in Connecticut lore and legend. Happily for Whalen, she was given one of the loudest ovations of the night with Bird in the house Thursday when it was announced she became the 12th player in WNBA history to earn 900 career assists.

One of the commenters on DiMauro’s article even pointed out that the public address announcer at Mohegan Sun Arena introduced Bird with a home-town "Suuuuuuuuuuuuuu Bird!" welcome.

Bird gets most of the accolades as is -- All-Star selections, All-WNBA selections, and Olympic gold medals…does she really need to get a hero’s welcome in Whalen’s house?

I know Whalen won’t say it publicly – which is classy – but with Bird in town and all that comes with that, the Sun's 64-53 win must have been just a little bit sweeter.

But let’s put winning aside for the sake of keeping my point guard obsession alive, even if neither Whalen nor Bird care to engage this dialogue.

Forget all the hoopla and ghosts of UConn success past, present, and future...I’m focusing on the performance on the court.

Now clearly, it isn’t fair to make this sort of claim based on one game of evidence. However, what I found interesting is that there were elements of each player’s performance last night that perfectly represent why I might give the edge to Whalen as the better point guard for the season as a whole.

And really the way I classified each player yesterday gives away why I’m making the claim – Bird as a facilitator and Whalen as a combo guard.

Yes, we can say that they are just two different types of point guards: Bird is probably the better shooter, while Whalen is the more physical player who uses her size and an amazing ability to see the angles of the game to do a little more off the dribble. But you would have a hard time convincing me that one is a significantly better playmaker than the other by any reasonable standard.

So if I consider them approximately equal as playmakers, I start to look at other things and the fact that Whalen can do more on the court because she’s a more physical player makes it easier for me to claim that she indeed is the better point guard.

And I have three rather simple reasons for that: her ability to attack the basket, her scoring efficiency, and her defensive versatility.

The way Whalen and Bird started the game last night really says a lot about their styles as players.

As stated previously – and mentioned by Sun coach Tom Thibault at halftime – Bird is probably the better shooter while Whalen is more physical and a little tougher.

True to form, Bird’s first three plays last night were three point shots, all good ones in rhythm. After that, she made two passes in the half-court to shooters that missed.

In contrast, Whalen’s first three plays were a fastbreak lay-up after a steal, a three pointer, then a missed contested layup on a fast break. Her next three were a nice pass to center Sandrine Gruda on a fast break that resulted in free throws, a missed jumper, and an assist to Gruda for a free throw line jumper, set up by a decisive dribble in the flow of the offense and a well placed bounce pass.

The point is that when Bird gets off to a cold shooting start, she sometimes disappears for quarters at a time. When Whalen is not shooting well, she keeps herself involved by staying in attack mode and finding ways to stay involved in the game, whether that be rebounding, making the right pass, or driving to the basket.

But when Whalen does attack the basket good things happen both for herself and others. It keeps the defense off balance, allows teammates to get easy scoring opportunities, and allows her to get high percentage shots. In last night’s game in particular, Whalen set the tone that allowed her team to win the game.

However, the most important part of Whalen’s aggressiveness driving to the basket is that it gets her easy scoring opportunities. Some numbers from Swanny’s Stats illustrate this point.

Bird relies more heavily on her midrange jumper for scoring and unfortunately has not had a very good shooting year from that range. As of July 30th, almost 30% of her field goal attempts were from the 16-20 foot range but she has only made 30.4% of those shots, which is the 8th lowest in the league.

In contrast, just under 20% of Whalen’s field goal attempts come from the 16-20 foot range and she shoots the fourth percentage in the league from that range. And that’s just the beginning of the shot selection story.

Whalen is among the league’s top 50 in both free throw rate and 2 point percentage whereas Bird’s 2 point percentage is just inside the top 100 and her free throw rate – just below 10% -- is one of the lowest in the league. (Storm teammate Katie Geralds is the lowest of any qualified player at just under 4%). Free throw rate can also be considered a proxy for a player’s aggressiveness in driving to the basket in traffic – you don’t get fouled on a shot very often standing around the three point line and swinging the ball.

So what does this set of numbers tell us? Although Bird is generally considered the better shooter – and I won’t dispute that – Whalen does a better job of creating scoring opportunities for herself that she is able to convert – taking less long shots, attacking the basket more often, and finding her way to the free throw line.

In terms of overall performance, Whalen is both a facilitator in terms of setting up baskets for others and a scorer in terms of finding easy baskets for herself. That ability to penetrate the defense and attack the rim is a critical ability that many teams look for in a point guard. It’s not that Bird cannot do that, but this season, Whalen is a bit better at it.

This actually isn’t my idea but Thibault’s. And though he’s a bit biased, I think he’s right.

During the halftime interview last night, Thibault discussed the strengths of Bird and Whalen. To paraphrase, he said that although they are about equal defensively, Whalen’s physicality allows her to sometimes guard 2’s and 3’s.

I don’t think that means she’s a defensive stalwart by any means, but it certainly gives a team more options when trying to find winning combinations to put on the floor.

While this is not the most convincing argument for choosing one player over the other – WNBA.com has both of them listed as 5’10" 150 pounds – it’s an interesting point that Thibault made.

But maybe this all come down to a matter of a difference in mentality?

It’s not that Bird cannot drive, cannot be an efficient scorer, or cannot defend.

It’s that Whalen brings a physicality and toughness to the court in a way that Bird does not.

And that attitude almost prevents Whalen from disappearing for long stretches of time in the same way that Bird does – and that’s without even talking about Whalen’s rebounding ability, which is among the best of any point guard.

This is what I mean when I label Whalen a "combo guard" – she is a facilitator and an efficient scorer. It makes her more dangerous and more valuable to her team. Ultimately, it's about decisions the player makes on the court...and I do think we can evaluate the quality of those decisions.

But when Bird turns it on – as she did at the end of last season and in spurts during games this season – she is the best. Hands down. No dispute here.

I would just argue that Whalen is able to make that happen more consistently.