Share All sharing options for: Storm Reach Out to NCAA Season Ticket Holders: Do NCAA Fans Fit the Profile of Potential WNBA Fans? 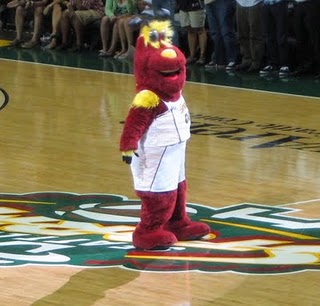 There are plenty of creative ways to expand the WNBA's fan base and most recently, we've seen efforts to "convert" NBA fans.

Getting NBA writers to games is one way to create positive press through someone considered a "credible source" to NBA fans.

Mercury blogger Ben York has challenged a hater to watch a live game and actually base their opinion on evidence rather than spurious assumptions.

But I saw a different strategy yesterday while clicking around the University of Washington website to check out their women's basketball schedule: why not tap into local university season ticket holders?

Women's basketball season ticket holders are invited to attend a meet and greet session with Husky head coach Tia Jackson and members of the 2009-10 women's basketball team, and attend the Seattle Storm vs. Connecticut Sun game at Key Arena on August 27.

I don't know whether this has been done before at UW or elsewhere. And perhaps UW is in a unique position to do this well because head coach Tia Jackson is a former WNBA player coaching a team in a WNBA city.

Nevertheless, it's an interesting idea.

NCAA women's season ticket holders likely don't have the same biases as NBA fans or outright haters. And they might enjoy watching the "best of the best" compete as an extension of a sport they already follow.

But most of all, you know they're willing to spend money on women's basketball, which makes them particularly attractive as potential fans.

Of course, I know that college and professional basketball don't mix for everyone -- I know plenty of fans who like one and disdain the other. (Update: Clay Kallam has written about this problem as part of larger phenomenon of "Our Girls Syndrome".)

But if the goal is to expand a fan base, this seems to be a strategy worth pursuing more aggressively, even if the assumption is that this demographic of NCAA season ticket holders have already consciously chosen to either follow the WNBA or ignore it. In the event they have not been to a game, it might be a good way to tap into a group of people who you know are willing to pay to watch women's basketball.

I am planning on being at that August 27th game with two UW students...so maybe I'll check out Jackson's meet and greet before I fixate on comparing Storm point guard Sue Bird and Connecticut Sun point guard Lindsay Whalen. And maybe, we'll come away wanting to check out a UW game as well.

(Extended) side note: I took a look at season tickets for UW women's and men's basketball, which are both reasonably priced, I think. The men's team figures to be better than the women's (again), but I want to give women's NCAA basketball a shot this season. But wouldn't it be cool if you could get some sort of discounted package deal for getting both? Wouldn't that be another interesting way of attracting fans to the NCAA women's game?