There is nothing quite like watching NBA players represent their high school teams in a humid high school gym.

In fact, Shoals estimated about 500% humidity…and we must have sat there for five hours taking in a high school alumni game complete with music and a hype man, which at times made the basketball on the court teeter on the edge of irrelevance.

But we suffered through the difficult conditions simply for the star power.

Although the Sonics have left the city, there is still a surprisingly strong NBA presence in Seattle as evidenced by the impressive list of alumni that have come from a handful of schools from a relatively small radius.

The Adonai Hood Classic is a two-day tournament established in 2000 to bring together two rival neighborhoods in Seattle – the Central District and South Seattle – in a peaceful venue to help ease long-standing tensions. The tournament has now expanded to feature NBA alumni from four schools - Franklin, Garfield, O’Dea, and Rainier Beach.

This year’s tournament was played at the recently renovated Garfield High School gym. In addition to the high schools squaring off, the event features a three point and dunk contest.

Brandon Roy (Portland Trail Blazers/Garfield) made an appearance but did not play. 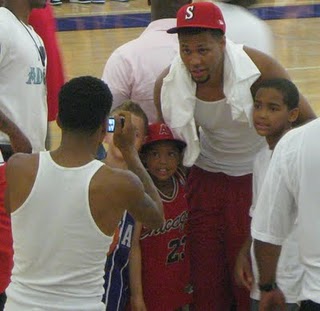 Robinson also participated in and won the three point contest, which was of course not the contest we were hoping Robinson would participate in... 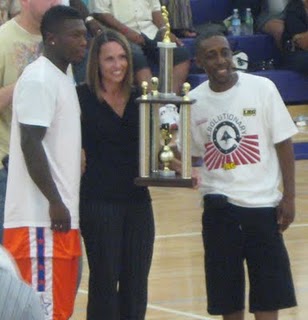 Franklin pretty much dominated O’Dea, with or without Brooks, and Roy looked on from the bench as Crawford and Robinson led Rainier Beach to a victory in the championship game.

Watching these NBA players going up against players with a range of professional basketball experience -- from college to NBA summer league to Europe – it was striking to see just what separates the NBA-caliber talent from the rest. The NBA guys were just a bit more decisive in their actions, a tad quicker on their first step, their passes just a bit more precise, and their jump shots a bit sweeter.


But perhaps the best part of watching an event like this is players like Robinson who just seem as happy to play basketball in a humid gym as he does on the grand stage of Madison Square Garden. It’s hard not to appreciate someone who plays the game with such passion, has a thirst for victory even in an alumni game with people making millions less than him, and yet doesn’t really take himself too seriously, despite craving the spotlight.

Events like this with personalities like Robinson are a nice reminder that basketball is after all just a game made a bit sweeter when attached to good cause. Definitely worth the ten dollar admission fee and sweat therapy. 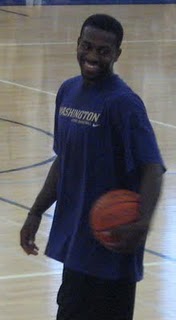