A Point Guard to Build a Dream On: Penicheiro Is Still Creativity Personified

Share All sharing options for: A Point Guard to Build a Dream On: Penicheiro Is Still Creativity Personified 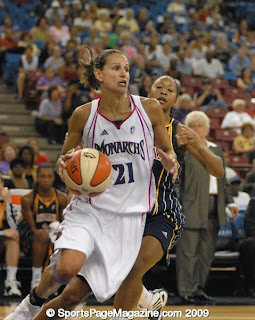 But I still have to step back and say wow.

With just under 6:30 left in the fourth quarter against the Atlanta Dream last night, Penicheiro brought the ball up the court at about ¾ speed in transition. As Dream defenders had done all night, rookie point guard Shalee Lehning was sagging down to the free throw line as Penicheiro got to the three point line, exploiting Penicheiro’s notoriously inconsistent jump shot.

And yet in typical Penicheiro form, she used a series of changes of pace, hesitations, head fakes, and changes of direction to get to the baseline and rendering Lehning almost helpless to stop her. As the Dream defense collapsed – seemingly leaving Penicheiro with nowhere else to go – two of her teammates suddenly became open: forward Hamchetou Maiga-Ba popped out for a jumper on the wing while Rebekkah Brunson waited and cut to the basket through a now clear lane.

Surrounded by four Dream defenders Penicheiro got Dream center Sancho Lyttle to shift her weight in the wrong direction with a subtle ball fake, took to the air and hit the cutting Brunson who was left unattended in the lane. After the defensive havoc Penicheiro had just caused, all Dream forward Erika Desouza could do was foul, sending Brunson to the line.

With the Monarchs down 21 points at that moment in time, the play is insignificant in the grand scheme of things. The Monarchs ultimately lost and Penicheiro didn’t pick up the assist although it was her effort that undoubtedly created the scoring opportunity which ended in free throws. But the way in which she seems to be in total control even as she’s in the middle of switching gears and throwing a flurry of fakes at her opponents never ceases to amaze me.

It’s not necessarily original to say that Penicheiro is the epitome of basketball as an art form – creatively drawing upon the resources revealed to her in a situation to make beauty out of a chaotic world. And even in the twilight of her career, in a 103-83 blowout that pushed the Monarchs further into the cellar of the Western Conference, appreciating Penicheiro is almost a mandate for anyone who considers themselves a true fan of the sport.

Forgive the basketball snobbery, but if you can’t recognize the beauty in Penicheiro’s game, it’s time to move on from basketball and find a new sport.

Given that, it’s probably not a stretch to say that Penicheiro represents something of the archetypal point guard in the basketball universe. She is a pass-first player, with court vision and seemingly in control of every single moment on the court, keeping her dribble live as a means to create things even when everything seems to break down.

Just the other day, Shoals and I briefly exchanged emails about legendary NBA point guard John Stockton and Shoals suggested that Stockton is "an elite role player" – a player who became a Hall of Famer simply by playing his position to perfection. Although Stockton was by far a better shooter than Penicheiro – it still amazes me that a point guard shot 51.5% over a 1,500 game career – Penicheiro is an "elite role player" in a similarly complimentary sense. She plays the position just as most people would imagine it being played in its most ideal sense and excites us when she does something beyond what we’re able to imagine.

Dream point guards Lehning and Ivory Latta pale in comparison to this point guard dream come true from Sacramento. It almost makes you wonder how a team like the Dream can even pull off a win with mere mortals running the point opposite Penicheiro.


But then you remember that this is ultimately a team game – players like Penicheiro can help facilitate plays for her teammates, but if the team doesn’t work well as a unit to begin with, it’s all rendered moot.

The Dream's one-two combo at point guard offer very different things that can be useful at different times – Latta did do what she does well in scoring points but picked up 2 of her three turnovers in garbage time while Lehning did what she does well running the team and picking up 10 assists but didn’t even get a shot off until missing a contested fast break lay up.

The best we can say is that in this situation -- a team with two all-star post players who they went to early and often -- Lehning is working out well running the offense and helping the team get them the ball.

That’s not a final objective judgment of either player’s talent or future as a WNBA player. But to use the notion of a player being functionally effective within a role, Lehning – while not nearly the image of positional perfection that Penicheiro has been – is filling the function of point guard well enough to keep the Dream in second place.

If the question shifts from an assessment of talent based on an idealized positional standard that nobody aside from Penicheiro (or Stockton) are likely to achieve to a question of who fills the role of point guard well enough for the team to be successful, Lehning is doing just fine.

Of course we all wish to have a Penicheiro or Stockton on our favorite teams, but somehow we have to find a way to appreciate the less-than-elite role players too.