The Los Angeles Sparks: "Expect Anything"

Share All sharing options for: The Los Angeles Sparks: "Expect Anything" 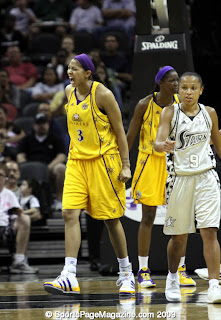 After the Los Angeles Sparks' 67-66 overtime road win over the Silver Stars last night, San Antonio forward Sophia Young perfectly articulated why this was the one game I was looking forward to seeing all week.

"With LA we expect anything,'' said Young. "It's always going to be a good game. They never blow us out, we never blow them out, and it's always an exciting game for the fans.''

Too bad nobody could see it on WNBA LiveAccess...because there's more than one reason to want to watch the Sparks.

Consistent with Young's statement, this was a tightly contested game, perhaps even an ugly one. Looking at the Four Factors statistics, the only major thing separating the two teams last night was the Sparks' dominance on the offensive boards, which is typical of when these teams play.

Combined with the San Antonio Silver Stars' uncharacteristically low assisted field goal percentage -- meaning they were not moving the ball well -- the Sparks got enough of an edge to pull this one out.

However, what makes the game more significant is that it marks a major turning point for the Sparks season -- the night when they became a legit playoff team. Not just because the Sparks moved into third place in the Western Conference after an abysmal start to their season, but also because of how they did it.

The Sparks beat the defending Western Conference champion Silver Stars in San Antonio in a (seemingly) gritty overtime battle to extend a 3 game winning streak to 4.

That’s the type of game hungry and serious playoff contenders win, not only because they have to fight for playoff position, but just to prove to everyone else that they are a team to beat. It forces us to shift our thinking about the Sparks from wondering about what has transpired thus far this season to wondering what might come to pass in the post-season.

And that’s what makes this most significant to me and the reason why I’ve taken an increasing interest in the Sparks since the All-Star break.

Los Angeles fans shouldn’t be the only celebrating the Sparks transition into a legit playoff team. The Sparks are in the midst of constructing what could become one of the league’s great narratives…and that’s good for anyone who cares about the health of the WNBA.

Having center Lisa Leslie make a deep playoff run in her final season and Parker emerging as a real post-season performer after all the mess of a season this has been for them so far really is a great story that sports fans should be able to step into.

Leslie and Parker are arguably the two most prominent women’s basketball players in the U.S. Dramatizing the transition from one to the other with a successful final run for Leslie is exactly the jolt the league needs.

Given the narrative of this season – maternity leave, injuries, inconsistent rotations – having those two at the center of a successful turnaround also creates a hero narrative for the WNBA that is so rarely applied to women’s team sports. It gives people reasons to continue following.

Part of what attracts people to pro sports are hero narratives – people we can root for and who accomplish things that we can only imagine. People who can overcome adversity when everyone has counted them out and persevere to reach the top of their craft.

We can talk all we want about how basketball is a team game and that's what makes it beautiful, but let's be real: it's individual figures like Los Angeles Lakers legend Magic Johnson that make leagues successful.

I’m not saying I am rooting for the Sparks to win it all. But it’s hard to deny that every step closer they get to the WNBA Finals from this point on will be good for the WNBA.