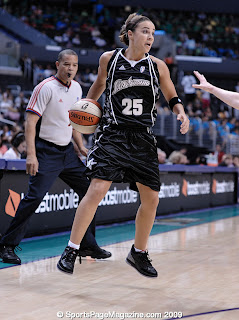 As she dribbled the clock down to about 7 seconds before really making a move to initiate a play, it seemed logical that the Silver Stars had put the ball in Hammon’s hands to take the final shot.

Hammon is one of the craftiest offensive weapons in the WNBA and a rookie didn't seem to stand a chance against her.

With about five seconds left, Hammon dribbled around a Sophia Young screen, in a play that seemed to be a pick and roll. With Young quickly covered by Lynx defensive stalwart Nicky Anosike in the paint, Hammon kept the ball, temporarily mishandling it after taking one of those "not me" bumps from Lynx forward Tasha Humphrey on the wing.

Then Hammon worked some All-Star magic and showed why she's among the league's best players.

Hammon kept the ball for herself turning the corner and splitting McCants and Lynx guard Renee Montgomery. With two seconds left and Anosike in between her and the basket, Hammon took to the air trying to hit a running jumper. Seeing that she had no shot with Anosike in front of her and two other players around her, Hammon spotted center Ann Wauters wide open just inside the free throw line after Humphrey got lost on the rotation after bumping Hammon on the wing.

Wauters hit an uncontested jumper at the buzzer, sending the Lynx home with an 89-87 loss after a hard-fought fourth quarter comeback.

Add the Lynx to the list of teams who have been victimized by Hammon’s playmaking ability.

She set up a similar buzzer beating play to All-Star forward Sophia Young for a Silver Stars victory over the Storm on July 28th. But she’s also been dominant in losses to Sacramento, Seattle (August 1st), and Atlanta.

When they come to Hammon, they give a response like, "Well, she’s a great player, but not really a point guard."

To be honest, since I’ve started watching the WNBA consistently last year, that’s how I’ve felt about Hammon. Despite the fact that WNBA GM’s voted Hammon as the third best point guard in the league in the pre-season survey (tied with Ticha Penicheiro and Katie Smith), it has always struck me as difficult to cast her as what people might traditionally consider a point guard.

Hammon definitely handles the ball well enough to be considered a point guard, but shoots the ball enough to seem more like a shooting guard. It has thus been tempting to cast her as a small scoring guard instead of a point guard.

However, after watching her in person at Key Arena on August 1st and against the Lynx last night, I think it’s probably time that we stop qualifying statements about Hammon and just consider her a point guard.

And if we consider her a point guard, has any point guard in the league been better this season?

What is a Point Guard?

Coincidentally, an article from a San Antonio NBA blog entitled "What is a Point Guard?" holds some insight into how we might expand our traditional notions of who "counts" as a point guard.

The blog essentially characterizes a point guard in much simpler terms than I have in the past with my analysis of point guard styles:

Once it is established that a player can effectively bring the ball up the court and initiate the offense – which is no easy task against pro-level athleticism and defense – defining a point guard is more a matter team-specific expectations than a rigid set of attributes.

He uses Tony Parker as an example of how a point guard fits within a specific system:

However, it's not just individual man-to-man pressure that a point guard has to handle. They also have to handle traps both full court and half court. At times last year, George Hill struggled with all three. Full court man-to-man. Full court traps. Half court traps. When he struggled, we ended up with Bruce bringing the ball up court or a turnover. Neither of which is conducive to the Spurs scoring.

Why don't teams do this against Tony? Well, a couple reasons. One, Tony is a very good dribbler. He is very difficult to trap because of both his dribble and quickness. Because of this, he can frequently beat the trap alone which puts the Spurs in a 5 on 3 situation. If the other team puts full court man-to-man pressure on Tony, Tony is usually fast enough to blow by his man which leads to a 5 on 4 situation. In short. Tony is dangerous offensively. The Spurs run a lot of very high screens to be able to have him shake his man and attack a big at the free throw line. Why would the other team GIVE them this situation by employing a full court press? The answer is, they don't.

Of course, Parker’s particular style of play and athletic attributes are not necessary to play the point guard position – we can all think of a range of much slower and non-scoring point guards who have played the position well over time (Mark Jackson comes to mind).

The same type of analysis could be applied to any basketball team in order to establish what they might expect from a point guard: what are they trying to accomplish? And does this particular player allow them to do it?

The reason people may tend to disregard Hammon as a point guard is that she might appear to be spending more time scoring than initiating a team’s offense.

Her assist ratio – the percentage of plays on which she creates an assist -- is18.53%, just outside the top 50, well below that of most point guards in the league. Her pure point rating – a metric that measures how well a player creates scoring opportunities for others when on the floor – is also just outside the top 50 and well below that of the league’s top point guards.

In addition, although she is a rather efficient scorer, she is also a volume shooter. So when you add it all up, it just seems that Hammon would not be the type of player whom we would label a point guard.

However, what Hammon does extremely well is use the threat to score as a means by which to create opportunities for others. She’s not a point guard who is racking up assists just by swinging the ball to an open shooter – Hammon is often driving and forcing the defense to shift in ways that create open shooters.

And right now, Hammon is doing the job of creating scoring opportunities for others better than anyone else in the WNBA.

If being a point guard comes down to a matter of decision making – more specifically, making the decisions that help their team score points – then understanding Hammon as a point guard should come down to an evaluation of her decision making. If she is the best scorer on the floor in almost any game she plays, then creating scoring opportunities for herself is actually a good decision.

Her team needs a player who can penetrate and create offense for themselves and they need someone who can get the ball to All-Star forward Sophia Young and center Ann Wauters. Hammon’s ability to make efficient scoring decisions in addition to finding ways to set up others should put her in conversations as one of the best – if not the best -- point guards in the league.

But maybe the discussion of how we classify Hammon really doesn’t matter. Maybe it’s sufficient to just say she’s a great player, as Sue Bird commented after the Silver Stars' August 1st loss in Seattle.

"She’s such a tough player," said Bird, who guarded Hammon at times throughout the game. "She’s really, really creative. Really, really deceptive. She’s able to separate herself, even at her height, against players that are 6-5 and get her shot off. And I think the one thing I would use to describe her – the one quality – is that she’s just a winner. And she makes plays down the stretch that not many people in this league can make."

If Hammon can win enough games to get the Silver Stars to the playoffs, she will be a strong candidate for MVP of the WNBA.

Renee Montgomery was very impressive down the stretch of this game, ending a 12-0 run by the Silver Stars in the 3rd quarter and catalyzing a 10-2 Lynx run in the 4th that got started the Lynx’s comeback. And really for Montgomery it was more of the same – her outstanding ball handling ability allows her to get by defenders and get herself open for layups off the drive. Her athletic ability makes her an extremely effective finisher.

But the most impressive thing about Montgomery to me is her defensive intensity. She’s tough and willing to take on just about any defensive challenge. With her athleticism, she’s able to stay in front of most players in the league and pick up steals. If she develops her range and continues to grow as a defender, Montgomery may be among the top point guards in the WNBA in the near future.