Given that I’ve made posts this week about San Antonio point guard Becky Hammon, Atlanta point guard Shalee Lehning, and a game that featured Washington point guard Lindsey Harding, you probably could have guessed that another point guard evaluation post was coming up.

Which does bring me back to a question that Bob Corwin of Full Court Press asked me recently: why am I so interested in evaluating point guards?

One need look no further than tonight’s matchup of the Seattle Storm vs. Connnecticut Sun, a game featuring two of the league’s top point guards in Storm guard Sue Bird and Sun guard Lindsay Whalen.

And really, isn’t it sort of fun to try to make an affirmative statement rather than being all polite and saying they’re both very good?

The subject does not interest Lindsay Whalen. She just shrugs and says quietly that she isn't inclined to wonder if her status as the WNBA's transcendent point guard — or potential Olympic star — has been impacted by the immense popularity and talent of Sue Bird.

So Whalen doesn’t care and Bird probably doesn’t either.

John Altavilla of The Hartford Courant suggests Bird and Whalen are point guards 1 and 1A in the U.S.…which is a little bit more conclusive, but still hedging toward a non-answer.

But isn’t part of being a fan caring about these questions? Why do else do we watch sports if not to see who’s best?

So seriously, who’s the better point guard? And what about other guards having really solid seasons like Hammon, Harding, or Phoenix guard Temeka Johnson?

Well…I did take another stab at answering this question and hit a road block that I brought up the other day: aside from bringing the ball up the court and making the first pass to start the offense, there really isn’t a set of critical attributes that make one point guard inherently better than another. Being a point guard is more a matter of team expectations – what does a team demand of their point guard? And what are their teammates’ strengths?

That seems to make it almost impossible to make simple rankings of one point guard against another. For example, consider Sun forward Asjha Jones’ comment comparing Bird and Whalen, from Altavilla’s article:

"[Whalen]'s been an All-Star and people who play against her understand she's one of the best point guards in the league. She and Sue are totally different sides of a coin, different approaches. Lindsay is more physical, Sue depends on her finesse, skating and sliding around on the floor."

So given that each player brings unique strengths to the position, we cannot judge them on a universal standard but on the basis of what function they serve for the team. And that’s partially why the point guard rankings I’ve done in the past feel so unfulfilling – even after laying out the evidence for why one guard is better than others, it has to come with a whole set of qualifiers.

And I haven’t even mentioned defense yet…

But perhaps we could ask a different question: how well does a player perform the function they serve for their team?

From there, perhaps we can establish a means by which to compare point guards: the best point guards are a) those that have demonstrated the ability to perform more functions than others or b) perform a given function better than others.

The question is actually more interesting for evaluating the quality of second tier point guards – backups or fringe starters – who aren’t quite as obviously dominant as the consensus 1 and 1a.

So instead of returning back to the rankings, I decided to focus on the function each player serves…and comparing them in terms of how well they perform what they do well. It may leave the question unresolved today, but perhaps lead to a better analysis in the future.

Last summer I took a stab at this by laying out a set of five point guard styles based upon a combination of the work done by David Sparks and some of my own observations about point guard play.

Basically, what I noticed was that various styles of point guard play could be pretty well defined by metric: assist ratio, which is the percentage of a player’s plays that end in an assist.

It’s helpful to start with Sparks’ player styles spectrum, which is divided in two halves: the top half is populated with perimeter players – where the point guards are -- and the bottom half with interior players. It is the poles at each end of the horizontal axis that will be the subject of this inquiry. The spectrum from near the end of last season is below (better because it is a full season of statistics): 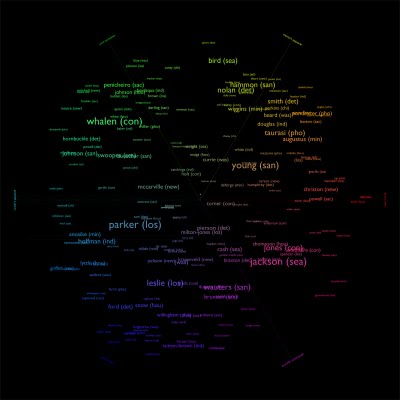 The left pole indicates non-scorers whereas the right pole indicates scorers. You may also notice that each pole has a unique color. So the color gradations of the players indicate the degree to which a player is more one thing (perimeter, interior, scorer, utility player) than another. The size of each player’s name indicates the relative quality of that player – how productive they are at their given style

This is where the point guard styles framework comes in.

This means that just looking at assist ratios I can move across the spectrum and start to figure out what style of play each point guard occupies. But obviously, there’s more to being a point guard than scorer and non-scorer. And as it turns out, the statistics can provide some insight into that as well.

Based on a combination of watching players play and looking at this spectrum I came up with five pretty distinct point guard styles last summer. Ultimately, what we can determine is the different types of decisions that each player is expected to make based upon their performance and how well they do that. Here’s what I came up with:

Initiator: the basic function of any point guard – comes down the court and gets the team into the offense. They are likely players who just get the job done without taking risks. This type of point guard probably has a below average usage rate and average assist ratio. Examples: Noelle Quinn, Vickie Johnson, Kelly Miller.

Distributor: These are the players who have the court vision and ability to find players in scoring position and get them the ball to pick up the assist. They might take a few more risks than an initiator, but also limit egregious mistakes. This type of point guard is characterized by a below average usage rate, an above average assist ratio, and an above average pure point rating. Examples: Temeka Johnson, Tully Bevilaqua, Ticha Penicheiro.

Pure facilitator: These are the players who will make the highlight film passes that make you think they have "eyes in the back of their heads". They take considerably more risks and might have more turnovers, but also have the ability to break down a defense and create scoring opportunities by forcing the defense to shift. This type of point guard is characterized by an above average usage rate, an above average assist ratio, and above average pure point rating. Example: Sue Bird.

Scorer: These are point guards who can break down a defense and score for themselves more effectively than the pure facilitator. They have a scorer’s mindset, but also have the skill to initiate or distribute. These types are characterized by above average usage rates, below average assist ratios, and at or below average pure point ratings. The statistic that really sets them apart as well is their high points per zero point possession rating. Examples: Becky Hammon, Renee Montgomery.

Combo guards: So by defining all the other types, it’s easier to find a good definition for the nebulous "combo guard" label. I would define these guards as different than shooting guards in point guard bodies. To me, a combo guard is a player that can create scoring opportunities for themselves and facilitate for others. It’s a fine line but I think numbers help to define it. These players would have above average usage rates, assist ratios, and pure point ratings, but also have a high point per zero point possession, but may also simply have a balance of all of the above. In comparison to the other types, there’s a wide range of quality for this one. Examples: Lindsay Whalen, Lindsey Harding, Dominique Canty.

Where do we go from here?

From here, we could look at the quality of each guard in each category to determine the top guards of each type. However, it is likely that we will be able to make substantive claims about overall quality after establishing that -- yes, Bird, Hammon, and Whalen are different types of players, but with that established, can we establish that one of them does what they do better than another guard?

More on that later...