Share All sharing options for: Deanna Nolan Quietly Exudes the "Superstar Attitude"…At the Expense of the Mystics 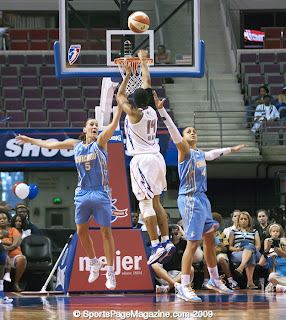 Some basketball players amaze me with their ability to overwhelm their opponents.

Other players stun me with their ability to make things happen that I couldn’t have imagined.

But I marvel at Deanna Nolan.

Moreso than any other player in the league, it seems that the only to fully appreciate her as a basketball player is to watch her play – stats, box scores, and game summaries just don’t seem to do her justice.

The Shock’s 81-77 victory over the Mystics last night is the perfect example.

Most of the summaries of last night’s game justifiably focus on the Shock’s surge/Mystics collapse in the fourth and Nolan’s game-high 23 points, further evidence that she is getting healthier by the game.

Once the Mystics started swarming her when she got the ball in an attempt to stop her from scoring, she started finding open teammates and setting them up for scoring opportunities. Though she didn’t actually record an assist in the third, I marked her with four "lost assists", baskets on which she would have been credited with an assist had her teammate made the basket. Two were very likely assists – Mystics guard Alana Beard blocked a layup attempt by Shock forward Cheryl Ford; forward Taj McWilliams-Franklin was fouled on a layup attempt after a beautiful drive and wrap-around pass from Nolan. But two others were open shots that the shooter just missed.

Nolan was outstanding in the 3rd quarter. And it was as though she expected all along that she would win the game. From the WNBA.com recap:

The Shock rebounded from a 53-41 deficit late in the third quarter.

"We weren't worried,'' Nolan said. "We were hitting shots. It was just a matter of getting those stops. We were in an offensive rhythm ... attacking, getting to the basket, getting to the free-throw line.''

That is what makes me marvel at Nolan – she makes everything seem so effortless and matter-of-fact.

And what’s there to worry about if it all seems to come so naturally?

It’s not just the way she literally glides along the court looking like she’s on Astroturf while everyone else is running through quicksand. Nor is it the way floats over her defenders making it almost impossible to actually contest her shots as she hovers above their outstretched arms.

And she does it all with this expressionless game face that makes her seem like more of a cold-blooded assassin than someone merely playing a game.

Nolan is not expressionless in the way San Antonio Spurs post Tim Duncan is, whose glare never changes but somehow constantly exudes fierceness. Nor is quite like Boston Celtics guard Ray Allen who almost seems to wear a look of disdain for those that would dare expect to influence whether his shot is on or off.

Nolan’s expressionless game face is almost indifferent to the current circumstances or the people who valiantly endeavor to stop her. Those other five people in the opposing jerseys almost don’t matter as if to say:

In the end, you can’t stop me.

Nolan strikes me as one of those players who is so good that she is unstoppable simply because she decides to be unstoppable.

Call it arrogance or confidence but the best athletes in any sport legitimately believe they cannot be stopped.

That’s not to say they don’t put in hours of practice over the course of years to develop the capacity to be unstoppable…but the fact is, that it’s as much a mindset as it is physical tools.

‘If a guy was sleeping and thought he could stop me, I’d go over to his house in the middle of the night and slap the hell out of him. If he even was dreaming about the fact that he could stop me, I would go to his house, and I’d just walk in his room and slap the hell out of him, and say, ‘Wake up. Don’t even think you can guard me.’ That’s the mentality you have to have if you’re gonna be a superstar in this league."’

To borrow a lyric from Detroit-area native Eminem – one of the few people on the planet who can match the uncompromising bravado of Barkley – it’s like Barkley has an attitude that does not even allow for the possibility of "thinking of having them thoughts thought up" about stopping him.

As I watched the Mystics play the Shock last night, that’s exactly what I was thinking – Deanna Nolan is not even entertaining the possibility that a Mystics player might be able to stop her.

However, the difference is that Nolan does not seem to have the desire or need to go around forcing people to recognize that she’s better than them.

Rather than focusing on the insecurity of the short-view full of "what-ifs" and "maybes", Nolan seems to have a sense of the long-view that allows her to put each fleeting moment in perspective, making the play-by-play almost insignificant in the context of the big picture.

If the Shock manage to sneak their way into the playoffs, Nolan’s unflappable demeanor would almost best embody the veteran presence of mind that allowed them to turn things around while all about them younger teams collapsed under the pressure of a post-season.

But it’s almost as though opponents can think, feel, or dream whatever they want because they simply pose no threat to a player like Nolan.

What they do just doesn’t matter.

Shavonte Zellous chimes in on teammate Deanna Nolan in a recent article in the Pittsburgh Post-Gazette:

"There are a lot of great players in this league, but my teammate, Deanna Nolan, is the toughest player I've had to guard," Zellous said. "And I have to guard her every single day. She really pushes me. She helps me a lot with my game because she plays hard all the time. That's been a great thing about this team. They've all been so helpful and made me feel so welcome."

"Hold up, hold up -- stop the beat a minute… I’ve got something to say…" Yes, Eminem is probably the worst possible person to quote in singing the praises of a WNBA player…given that the WNBA is a family league and all that. I mean, could you imagine him showing up and opening a Detroit Shock game to get the crowd going? The concert might get folks hyped…but…