Share All sharing options for: Wright’s Playmaking Ability Essential To Storm’s 72-69 Victory Over the Lynx 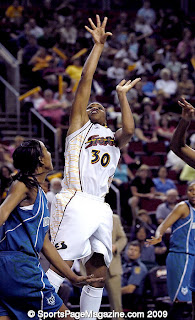 If what All-Stars do is make plays, then Seattle Storm guard Tanisha Wright should be named to the 2009 WNBA All-Star team as a reserve.

Nothing speaks to her ability to make plays more clearly than Storm coach Brian Agler’s decision to put the ball in Wright’s hands with 18.1 seconds left to make a play with the Storm down 68-69 to the Minnesota Lynx Sunday night. Wright scored the go-ahead basket on a contested lay-up between two Lynx defenders to help the Storm to a 72-69 victory over the Minnesota Lynx, ending their Key Arena slump.

Part of what makes Agler's decision so significant is that the play was drawn up for Wright instead of All-Star guard Sue Bird (who was the second option as a shooter on the wing) and All-Star forward Swin Cash (who was on the opposite side of the play).

"We felt like Tanisha was best in that scenario because we felt she can get to the rim, one, and we put Sue in the open corner where they couldn't help away from her," said Agler. "Tanisha’s got great body control so she can go hard and go straight up because she's so strong. So it was a great play on her behalf."

While Camille Little sealed the victory by drawing an offensive foul on Lynx guard Candice Wiggins in the waning seconds of the game and was the Storm’s top scorer with a season-high 18 points, Wright’s ability to make plays throughout the game was vital to the Storm’s victory.

Last night, Wright's willingness "to do whatever" included making plays for others, thus making her entire team better while she was on the floor. The ability to function as an effective distributor sets her apart from most shooting guards in the WNBA.

Wright had four assists and no turnovers last night, in addition to setting up her teammates for shots that led to free throws on a couple of other occasions. With the Storm’s traditional floor leader – Sue Bird – having an off-night, Wright’s contribution was absolutely essential.

However, prior to the Storm’s impressive fourth quarter comeback – punctuated by a game finishing 15-2 run – they seemed to lack the energy needed to beat a young Lynx team. After three quarters, the Lynx were up seven points and looked poised to beat the Storm who put forth a lackluster performance.

For most of the game, Nicky Anosike was dominant on both ends of the floor, creating scoring opportunities on offense and disrupting a number of Storm plays defensively, knocking away entry passes, blocking shots, and rebounding. Anosike’s athleticism and developing ability to face the basket and take her defender off the dribble or hit a short fade away jumper were particularly valuable in this game.

Roneeka Hodges had an impressive second quarter, hitting a string of contested perimeter shots and recording 7 of her 12 points. Tasha Humphrey made her first appearance with the Lynx, making an important contribution off of the bench with seven points in 12 minutes.

Renee Montgomery made the first start of her career for the Lynx and played a steady, more patient game than she has in the past, despite having a statistically mediocre game with eight points on 2 of 6 shooting as well as 2 assists and 2 steals. However, we can probably expect more from Montgomery in the future.

"She has to learn a lot. It’s going to be a learning process," said Lynx coach Jennifer Gillom before the game. "Game by game she’s been huge for us and she’s shown signs of having a great future."

Jennifer Gillom is a pleasure to watch on the sidelines. She responds to the game with the unrestrained passion that a fan would while maintaining a level of intensity and seriousness that clearly make her a great coach.