How the Shock Beat the Storm: Shock Remind the Storm That Basketball is a Contact Sport

Share All sharing options for: How the Shock Beat the Storm: Shock Remind the Storm That Basketball is a Contact Sport 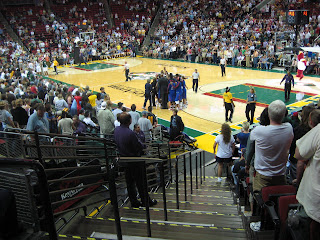 Once again the Seattle Storm faced an opponent that limped into Key Arena searching for answers to their flickering expectations and an unlikely win in a game in which they really had nothing to lose.

And once again, the Storm allowed what appeared to be an easy victim overcome the Key Arena mystique and beat them in their own house.

The basic boxscore explanation for the Detroit Shock’s surprising 66-63 victory over the Storm last night is reminiscent of the Storm’s previous loss to the Chicago Sky on Sunday night: the Storm allowed the Shock to shoot 53.2% from the field and a blistering 62.5% from the three point line.

In case you're new to basketball, a team that allows their opponent to hit more than half the shots they take for 40 minutes generally does not win...it's just sort of hard.

However, the story underlying the statistics might be more important to understanding what happened in this game: the Shock just bullied the Storm into submission for most of the game, which is exactly what informed WNBA fans might expect them to do. 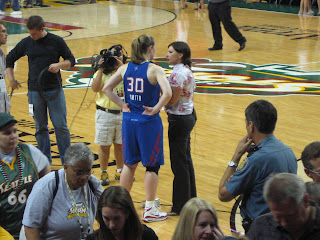 Long before Katie Smith’s outstanding performance late in the fourth, Detroit just seemed to be overwhelming the Storm with their physical style of play on both ends of the floor. Most Storm shots were contested, every cutter caught an elbow to the chest, and the Shock’s infantry of post players just out-muscled, out-hustled, and outworked the Storm’s frontline for most of the game.

While the physical nature of the game took its toll on both teams – Shock forward Kara Braxton left the game in the third with a bloody nose, shortly before Storm forward Lauren Jackson headed to the locker room with a calf injury – Detroit just seemed to keep coming with more bodies and more tenacity. They just never let up. 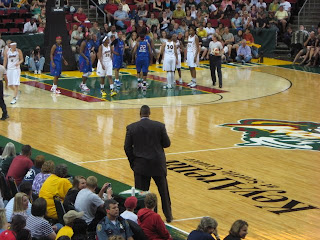 Perhaps none of that should be surprising from a Rick Mahorn coached team shaped by Bill Laimbeer.

However, what was even more impressive is that in the process of brutalizing the Storm, the Shock also seemed to be beating the Storm mentally. Even after hitting a lull early in the second half eroded their nine point halftime lead to two points before falling behind by four late in the fourth, the Shock just appeared unflappable. And in turn, while they kept their heads, they found ways to continually disrupt the Storm.

With a number of physical post players along with very athletic perimeter players, the Shock are able to toss a number of defensive looks at their opponents and keep them off balance. 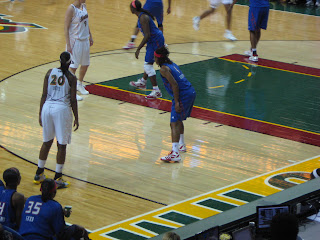 More concretely, this team appears to be so confident defensively, that it doesn’t matter if forward Cheryl Ford rotates to guard shifty guard Tanisha Wright or if diminutive rookie guard Shavonte Zellous is matched up with Camille Little. There is never any sign of panic – there seems to be a faith in the system and each other that they will pull through as a unit.

However, the other thing that having so many talented defensive pieces means is that the Shock are extremely flexible in terms of the type of defense they can throw at their opponents.

During one sequence late in the fourth quarter with the Storm up 63-62 after Katie Smith hit a pull-up jumper from the wing, the Shock’s man defense that had tormented the Storm all night suddenly morphed into a 2-3 zone. After wasting time on the shot clock trying to recognize the zone, Camille Little forced up a contested shot in the paint, and the Shock ended up just outworking the Storm for the rebound. Smith got the ball off of a screen on the other end and hit another jumper to put the Shock up one.

The Storm then brought the ball across mid-court on the next play and after having trouble recognizing the defense again, they spent a timeout with 53.6 to work out their strategy…only to get another contested jumper by Wright.

Sometimes it’s not just having talent or having the right pre-game strategy but using the right tactics at the right time to take the opponents out of their game and keep them just enough off balance to gain a tiny and temporary advantage. The Shock did that very well throughout the game last night.

After losing to the Sky at home on Sunday for the first time in over a year, most people in Key Arena probably expected the Shock to come out of the gate the more hungry and focused team last night. Unfortunately, the Shock had different plans. While it looked like Doppler came prepared to stare down the Shock, the Storm just didn't seem to have enough last night.

Did someone wake the snoozing champion? 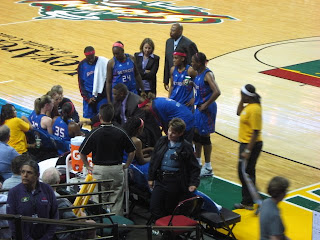 2009 has been rough for Detroit thus far, but if last night’s game is any indication, this team might be ready to make a push to defend their title in the post-season again.

And unlike the Sky, who made their win in Seattle look like a fluke after their 84-74 loss to the Indiana Fever yesterday (that looked worse than the score indicates), the Shock appear to be putting things together rather than just haphazardly finding temporary solutions to long-term problems.

This could be crazy talk considering that they currently are at the bottom of the Eastern Conference. But if they continue to stick to the physical style of play they treated Key Arena fans to last night, do you really think that erratic New York, Atlanta, Connecticut or even Chicago teams will stand in their way? 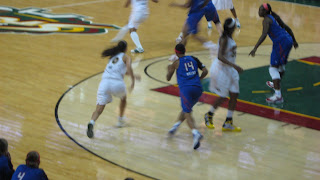 I haven’t watched enough Shock games this season to make claims that they have finally turned it around. Nolan is clearly still recovering from injury and working herself back to form. There still seems to be a lot of confusion out on the court, possibly the residual effects of the early season coaching change.

But there’s one thing you cannot deny when watching the Shock – this is a well-assembled, mentally tough, and extremely talented basketball team.

A note on the refs (who missed a few calls...here and there...): A quote from Jayda Evans, "Officials don't know what a travel is in this quarter, but that's working in Seattle's favor."

Yes, the Storm got a few bad breaks, but so did the Shock. As a semi-neutral fan (it's hard to be fully neutral in the Key) I actually thought there were a number of bad calls and a lot of them against the Storm. The most important one: on that play at the end of the game where Wright drove and had the ball "knocked away" from her out of bounds. I was in pretty good position to see the play and it very, very clearly went off of Wright's leg out of bounds. Had the Storm actually made that last shot attempt, the Shock would have plenty to legitimately complain about. In other words, for Storm fans complaining about the refs, the reffing did not lose the game for the Storm -- the Shock did.

Despite failing to hit the shot near the end of the game, I was again quite impressed by Tanisha Wright. I say she has a good shot at an all-star spot…we’ll see what the coaches think.

Tomorrow: my impressions of Shavonte Zellous (she’s gonna be good…and I probably underestimated her in my latest rookie rankings) 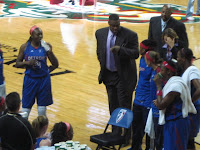 Seeing Rick Mahorn in person was great as those Bad Boys Pistons are still special to me. I never saw them actually play in person (the Pistons heyday was before I attended my first NBA game in Oakland) so this was probably as close as I'll get. Wishing him luck on the rest of the season! 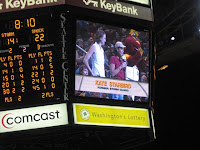 Kate Starbird was in attendance at Key Arena last night. She is apparently in graduate school in Colorado now studying technology in society in hopes of helping more girls get interested in technical fields. Definitely a worthy cause. Growing up in the Bay Area, I definitely remember hearing Starbird’s name quite a bit though I don’t have any vivid memories of her playing.

I went with the more traditional bratwurst instead of the Thai food last night. Big mistake – not only was the brat less filling, but for six dollars it was not nearly the same bang for the buck. Next time, back to the Thai.

Hoosiers is one of my favorite basketball dramas of all-time. During the break between the third and fourth quarter, the clip below from the movie as part of their Storm Vision trivia. The trivia question was something to the effect of, "What does Jimmy say in response to Gene Hackman after he asks, 'What's the matter with you?'" It was a rather simple multiple choice test, but the clip was still perfect to get the crowd riled up for a tight fourth quarter. Kudos to whomever is in charge of producing these little in-game activities.