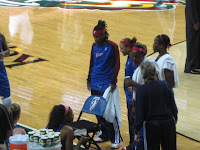 Shavonte Zellous does not exactly have the same imposing physical presence that many of her Detroit Shock teammates bring to the court.

At 5’10" one could assume that she weighs no more than 140 pounds on a good day, a point only reinforced by the fact that most WNBA websites -- and the programs distributed at Key Arena -- don’t list her weight. Her wiry frame and seemingly nonchalant demeanor on the sidelines hardly seem to fit the profile of the successful professional athlete that we may have grown accustomed to. 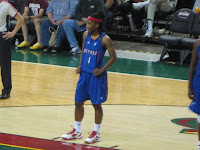 And yet, underneath that slight build and unassuming demeanor is an immensely talented and athletic rookie who has not only earned a spot in the Shock’s veteran rotation, but also leads all rookies in minutes per game. Even though her statistics in the first 11 games of her rookie year have been less than stellar, it becomes obvious why Zellous has earned such a significant role in the Shock’s rotation when watching her play. 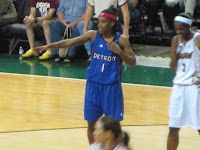 She plays with the confidence and tenacity of a veteran and is full of energy with plenty of energy to spare. She makes up for her slight frame with amazing speed, darting around the court to free herself for scoring opportunities on offense and disrupting the opponents’ plays on defense.

When I first heard someone compare her to her star teammate Deanna Nolan, I was immediately skeptical. Nolan is not only one of the WNBA’s top guards, scorers, and defenders, but she also possesses unparalleled athleticism. She almost seems to be gliding across the court when she runs with her long strides, looking so effortless that it almost hides just how fast she is. Could Zellous really become that good? 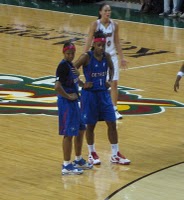 It’s difficult to tell just how good Zellous can become right now, but she certainly has all the athleticism, speed, and skill to warrant the comparison to Nolan. And of course it doesn’t hurt that she modeled her game after Nolan even prior to being drafted by the Shock.

So when I went to the Storm – Shock game at Key Arena on Wednesday night, Zellous was one of the players I chose to focus on and really a major reason I was looking forward to the game. I came away quite impressed.

An amazing ability to create shots…and working on making them

The WNBA.com draft preview described Zellous as, "an explosive and entertaining guard that has the ability to create her own shot off the dribble and either get to the basket or pull up with a smooth jumper." 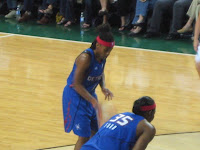 In addition to being a close second to DeWanna Bonner (11.7) in points per game among rookies with an average of 11.5, Zellous is also among the league leaders in free throw rate and makes opponents pay for putting her on the line with a 90.9% free throw shooting percentage.

She draws fouls simply by out-quicking opponents – as a defender, if you give her any space she’ll quickly pull up for a jumper and if you player her close she has shown that she can blow by almost anyone. By the time most opponents can catch up, they’re grabbing at her a few steps behind. Once that jumper starts falling more often, she will be nearly impossible to guard.

As amazing as she is offensively, I was far more impressed by her defense in watching her live against the Storm. I’m not sure I got a sense of just how fast she is and how much energy she plays with watching her on television (or LiveAccess). She is in constant motion. And that translates into really solid defensive play. 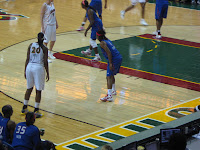 And when I say solid defensive play, I don’t just mean staying in front of perimeter players. Against the Storm, she guarded just about every position on the floor at various times. And no not just on switches or odd rotations – she was briefly matched up with the likes of all-stars Lauren Jackson and Swin Cash as well as forward Camille Little at various times, in addition to Storm guards.

But what’s important is that she was not just in the vicinity of these players creating an easy mismatch to exploit, but she fought…hard…and on more than one occasion, she was able to force them off their position, force a turnover, or even come up with a blocked shot. If defense is all about hard work and effort, Zellous’ performance against the Storm was the embodiment of that – she just seemed to want it a little bit more than the players she was guarding and found the strength to make plays on defense despite a serious size disadvantage. 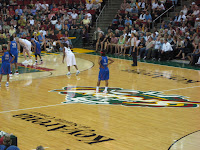 Zellous’ toughness, tenacity and fearlessness on the defensive end is makes her a potentially special player at the professional level. While she’ll probably earn build her reputation as an offensive weapon, her defensive ability is what will probably allow her to find a long-term place in the WNBA.

Looking forward to a bright future 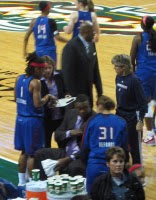 At halftime of the Storm-Shock game, an acquaintance who had followed Zellous since her high school days -- when she was an unheralded Pitt recruit out of Florida -- commented that that "this kid has a career". And that seems to be an understatement.

She has all the tools to have a long and productive career as a key player on competitive WNBA teams. And there aren’t many players who can say that they actually have the opportunity to learn from the player they aspire to become.

However, just being around great players doesn’t seem to mean a whole lot unless a rookie is willing to listen. In talking about rookie point guard Renee Montgomery, Minnesota Lynx assistant coach Jim Peterson mentioned that one thing that makes Montgomery successful is that she is an active listener, constantly trying to get better. And watching Zellous during the game, it was clear that she possesses a similar desire to listen. 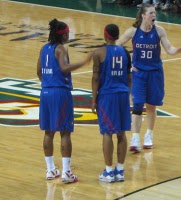 It seemed she was not only listening attentively to every word spoken on the sideline, but also actively seeking out information from almost anybody that would offer it – teammates or coaches, on the court or on the bench. She appears to be constantly engaged in a process of becoming a better player. And that could lead to great things in the future. 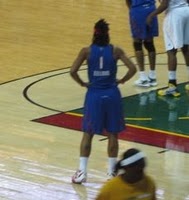 Zellous is ranked third in the most recent WNBA.com rookie rankings and fourth in the most recent Rethinking Basketball rookie rankings. Aside from the ranking of DeWanna Bonner, Angel McCoughtry and Shavonte Zellous, the WNBA rankings differ quite a bit from my rankings. Given her defensive ability, I would definitely bump her up to third. Will be interesting to see how this plays out over the course of the season.

Zellous is one of three rookies in the top 20 of the highest percentage of unassisted field goals according to Swanny's Stats: Zellous is #16 with an unassisted field goal percentage of 58.1%, Renee Montgomery is 3rd at 72.5%, and Angel McCoughtry is 4th at 70%. I suggested these three would give Rookie of the Year front runner DeWanna Bonner a run for her money because of their ability to create scoring opportunities with the ball in their hands. This statistic would provide further support for their abilities.

Zellous is also right ahead of Shock teammates Nolan and Alexis Hornbuckle's 57.1% and Katie Smith is 10th at 62.7%. While the stat by itself only says that these players are able to create a number of scoring opportunities by themselves, the fact that all four guards in the Shock made this list means that they might not be getting the type of ball movement they had in their offense last year.

That theory is supported by the fact that their assists/field goals attempted percentage is 20% thus far this season -- last season, the lowest ast/fga percentage was the 4-30 Atlanta Dream with a ratio of 21.46%. Against the storm, their ratio was 38.3%. Ball movement might not be the only explanation for the Shock's woes -- they had an ast/fga percentage of 10% in their previous win against the Sun -- but it seems to be one potential difference from last season.

If the Shock are looking to get back on track this season, this might be the right time -- their next game is against the Phoenix Mercury (who will be missing Diana Taurasi due to suspension) and the Sacramento Monarchs (now in sole possession of last place in the WNBA with the Shock's win on Wednesday night) before a four game home stand.