Revisiting the Storm-Sparks Triple Overtime Classic: Do the Sparks Still Have a Shot at the Playoffs?

Share All sharing options for: Revisiting the Storm-Sparks Triple Overtime Classic: Do the Sparks Still Have a Shot at the Playoffs? 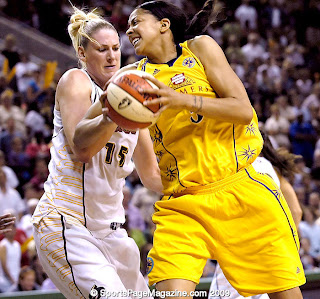 With less than a minute remaining in the third quarter of last Wednesday’s triple overtime classic in Key Arena, LA Sparks forward Candace Parker had the ball on the wing guarded by Storm forward Camille Little.

Parker had not yet scored to that point in the game and had been the last player down the court on multiple plays. There was no reason for optimism that Parker could suddenly put the team on her back and make something happen, but there was a lingering feeling from 2008 that she could make something happen.

Although Little had done a very good job defending Parker throughout the game, Parker seemed to have a glimmer of you-can’t-guard-me in her eyes. It was a look of determination, intensity and focus. It was a reason to believe that the momentum of the game was about to shift. Down by five points at the time, it appeared as though Parker was not quite ready to let this game slip away, even if the odds – and the Key Arena crowd – were in the Storm’s favor.


The clip played in Key Arena during overtime.
Parker passed the ball, got it back quickly, turned the corner after recognizing some confusion in the Storm’s defensive rotations, and scored over a helpless Storm help defender with a driving layup punctuated by an authoritative slap of the backboard, more reminiscent of the bravado exhibited in a pick-up game than what the average person might expect from a women’s basketball game.

She went on to finish the quarter with another contested layup and started the fourth quarter by assisting Tina Thompson on a three to put the Sparks up four points. Later, she hit a big jumper down the stretch and at one point gave MVP candidate and former Defensive Player of the Year, Lauren Jackson a challenge, drawing a foul on a short jumper.

It appeared Parker was starting to put the league on notice: she’s hitting her stride and once she does, she could return to embarrassing defenders nightly any game now.

Of course, the Sparks lost the game in triple overtime, partially due to a heroic effort by Storm guard Sue Bird in the third overtime, partially due to the Sparks’ mental lapses and inability to execute down the stretch. The Sparks played well enough to win, but in the end, the Storm just had a little bit more, even after losing some of their star power with Tanisha Wright fouled out and Lauren Jackson ejected.

Unfortunately for the Sparks, this scenario is reminiscent of a narrative that could potentially describe their entire season once the WNBA reaches playoff time.

Even if the Sparks turn it on, show the flashes of determined brilliance required of a champion, and hit their stride as a team instead of a collection of talented individuals, it’s very possible that it simply won’t quite be enough to send off a retiring Lisa Leslie with a trip to the post-season.

But can you really count out a team with four Olympians and a volume shooter having an all-star worthy season if they manage to get that determination, focus and intensity required to win? Do they still have a shot at the playoffs?

Watching Parker starting to turn it on for that momentum-shifting seven minute stretch in the second half is plenty of reason to spark optimism. Parker went on to finish last week’s game with 10 points, 10 rebounds, 6 blocks, and 5 assists, not bad for a player who is still not playing her best ball consistently. Parker’s increasing comfort on the court combined with Lisa Leslie’s expected return in the next few games, is certainly reason for confidence.

However, Parker’s performance alone was not the only reason for optimism evident in that game. As one might have expected, the Sparks got off to a decent start in the Storm game by playing with a higher energy level and outworking the Storm in the paint – in the second quarter, the Sparks had an offensive rebounding percentage of 70%. During that quarter, they only took one three pointer but had a free throw rate of 72%. So focusing on rebounding, high percentage shots, and moving the ball well, helped them overcome 11 first half turnovers and build an 8 point first half lead.

Further reason for optimism is a matter of scheduling, as described by The Root.com’s Martin Johnson:

…the Sparks have played more than twice as many games on the road as they have at home. They are 1-8 on the road and 3-1 at home. In the second half of the season, that split will reverse, giving a bit of hope for the rest of their season.

Johnson doesn’t even mention that the Sparks have three games against the struggling Sacramento Monarchs, who they defeated by 20 points in LA on June 21st.

If the Sparks can bring it all together and continue to play like they did in the second quarter, in addition to Parker playing the way she did for seven minutes in the second half, as well as Leslie contributing on both ends of the floor, they could dominate the second half of the season.

That would be the hope. 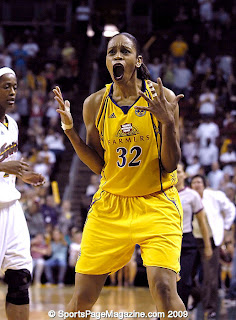 Practically speaking, the Western Conference might just be too tough. If the Sparks were to sneak in, who might we expect to fall out?

The Phoenix Mercury and Seattle Storm – both on pace to win at least 21 games -- would have to completely collapse in order to fall out of the playoffs. When Ann Wauters returns to the Silver Stars, they’ll likely return to last year’s form. The Minnesota Lynx seem to be the most vulnerable team with star player lost for the season due to injury and left with a very young rotation of players, that could collapse. So Lynx coach Jennifer Gillom’s statement that it would take 20 games to make the playoffs this year might be a good barometer for the Sparks.

The Lynx are on pace to win about 20 games, with a record of 10-7 halfway through their schedule. The Sparks would have to win 16 of their remaining 21 games – a winning percentage of 76% -- to get to 20 games. They already lost one game to the Lynx on the road, so if it came down to a tie-breaker, they would need to win all three of their remaining games against the Lynx (2 home, 1 road) to win that. And therefore to avoid a tie-breaker, they’d actually have to win 21 games.

An argument could certainly be made that the Lynx will fail to maintain their current pace in the second half of the season. Kevin Pelton’s expected wins standings have the Lynx finishing with 17.1 wins (and the Sparks with 14.7). Considering that the Sparks are likely to improve on their first half performance as they get their personnel healthy, they are probably more likely to exceed their expected wins than the Lynx.

However, while this is all mathematically possible, it would require an historic run – consider that the Indiana Fever who went on a 11 game win streak in the first half of the season, won 75% of their 16 games. To put it in perspective, the Sparks would have to play a little bit better than the Fever have to this point, for a longer period of time. It’s not unheard of, but it would take a significant turn-around.

Moving to actual game play, the Sparks’ point guard situation has been inconsistent, at best. They get flashes of solid point guard play from either Kristi Harrower, Shannon Bobbitt, or Noelle Quinn, but it’s difficult to predict when any of those players will turn it on, much less which player will do it.

In last week’s game against the Storm, it was Quinn who turned it on, scoring all but one of her 10 points in the overtime periods, including 6 points in the first overtime period just driving right through the Storm’s defense. Bobbitt played well along with Parker at the end of the third, but for most of the game, they did not get much from the point guard position.

For a post-dependent team, it can be a fatal vulnerability – the easy way to beat the Sparks would be to pressure the guards full court and prevent them from getting the team into the offense until late in the shot clock.

Ultimately, this is impossible to predict, which makes it fun to watch.

I said the Sparks would be the number team to watch at the start of the season and I don’t think that’s changed now after a difficult start. Parker will hit her stride. And eventually Parker and Leslie will be playing together. It will be interesting to see what they’re capable of.

However, my biggest reservation about the Sparks at the beginning of the season and the reason I was hesitant to anoint them the pre-destined champion is that I am always skeptical of these type of all-star teams that franchises assemble for one-year runs. They rarely work. When they do it’s because they lack the type of major vulnerability like the Sparks have at point guard.

The number one problem is always figuring out a way to find roles for every player and then finding a chemistry that maximizes each player’s talent within a particular style, not going play to play searching for an option and waiting for someone to step up.

And if they do pull it off, it would actually be a storybook ending for Leslie’s career.

The energy at Key Arena last Wednesday was amazing. It's not often in life that you get the privilege of being present for a triple overtime game that is as well played as the Sparks-Storm game was (especially in the 4th quarter and overtime(s)). It got so good that Bird's third overtime run was almost anti-climactic -- it felt as though a last second jumper would have been more befitting for the game.

That was one of the games that I wish people on the fence about the WNBA could see -- it had all the passion, big plays, and excitement that you could want for a sport. If you can't appreciate the game after a game like that, then it's not for you...and that's perfectly fine.