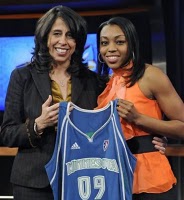 Those who watched the Minnesota Lynx’s 96-94 victory over the Washington Mystics witnessed a special performance from Renee Montgomery that is not fully captured in the standard game summary.

Her game has been variously described as "electrifying", a "scoring rampage", or my personal favorite from the Minneapolis Star Tribune: "Rookie guard Renee Montgomery, who usually provides a spark for the Lynx off the bench, was a flamethrower."

And it was all capped by some of the best post-game comments I have ever heard – simultaneously honest, humble, and humorous – including a clarification for those who might consider Montgomery "on fire" (or throwing flames) last night: "I didn't really catch fire, I just shot layups. It wasn't like I was on fire from (three-point range)."

However, the ability to get to the rim eight times in seven minutes at the end of a close WNBA game is no small feat. And though it was apparently the same play, she wasn’t exactly scoring in the same way.

The first was a drive to the basket to earn two free throws within seconds of entering the game. After a missed jumper, the next two were drives for contested layups and three point plays. The next started with a nice crossover move from the wing.

In overtime, she continued to focus on getting to the rim. The first came off a steal and fast break, which earned her another three point play opportunity. The other two were drives early in the offense in which she just went right through the defense.

Montgomery is talented no matter how much she attempts to minimize her performance. The Mystics did give her different looks after the first few drives. She just continued to dominate the game. She can handle the ball extremely well, use screens, and she can find holes in the defense.

If Montgomery’s season goes anything like this game – a slow awkward start punctuated by an absolutely dominant game-changing finish – she should be right in the thick of Rookie of the Year conversations.

Because Montgomery has something intangible that makes you want to believe she’s destined for greatness.

In Jim Peterson’s comments about Renee Montgomery on the Lynx Weekly radio show, he discussed how he had his reservations about her because she’s small and hasn’t been practicing well but that when the game starts she’s "a gamer". He discussed some of the intangible factors that make her great as well:

When you go 39-0 that’s a resume builder…Some of us were thinking about DeWanna Bonner, but you know the specialness of Renee Montgomery, the fact that Geno Auriemma who’s had so many great players at Connecticut was so high on her and elevated her to the top of his list in terms of all-time favorite players [snap]…boy that just spoke to us a lot…

She’s one of those gals that in huddles in practice – you know when Jen is talking about this that or the other – she’s front and center. And she’s looking up at the coach. And she’s paying attention. You’ve got her full attention. And that sets a tone too. She’s an old soul and I think that speaks well of her and what she’s all about.

The whole package – the clutch performance, the personality, and the practice ethic – is what will probably make Montgomery great, in addition to being in a system that is coherent and structured enough to bring out the best in her. And a large amount of credit for that should go to Jennifer Gillom.

Jennifer Gillom is the clear frontrunner for Coach of the Year

Gillom has the Coach of the Year award all locked up as far as I’m concerned. Barring a complete collapse in which they lose the remainder of their games and miss the playoffs, she’s done a masterful job of keeping this team together when it had every reason to fall into utter chaos.

But she did something else last night that I love: she stuck with her talented rookie in the clutch and put her confidence in her. So often this season I’ve seen coaches pull "hot" rookies from a close game in favor of a veteran, likely thinking that the veteran savvy is necessary to win games. There is some logic to that.

However, there is also a stronger pedagogical logic to what Gillom has done with Montgomery – instilling confidence in her talented rookie by not only putting her in the game and giving her the opportunity to succeed, but also taking the time to actually design a play that maximizes her strengths and actually allows her to succeed. If this team is going to win games without Olympian Seimone Augustus, they are going to have to maximize the remainder of their talent. For Gillom, that started from the moment she took over the team, as Nicky Anosike, Charde Houston, and Roneeka Hodges are all improving and contributing their unique strengths to the team.

It’s those little things that separate the great coaches and organizations from the mediocre ones. This season, it’s separating the top teams in the conference from the fringe playoff teams. And it’s why sometimes, even as outsiders, we can make reasoned assessments of coaching.

Coaching is not just about x’s and o’s, it’s also fundamentally about inspiring people and finding ways to help them succeed. I can’t think of a coach who’s done a better job of that this year than Gillom, especially given these extremely trying circumstances.

Getting the best out of a young, talented team

There was a point in the overtime period when Gillom had Montgomery, Candice Wiggins, Charde Houston, and LaToya Pringle in the game for the Lynx. To win a close game with that many young players in down the stretch not only speaks to Gillom’s coaching ability, but also just how talented this team is…especially once Seimone Augustus comes back next season.

Add to that mix Nicky Anosike and Quanitra Hollingsworth and this team has the makings of a dynasty. Yes, they are making their share of mistakes. But they are not only learning how to play professional basketball and play as a coherent unit, but they’re learning how to play successful, winning basketball. That experience will go a long way to helping them become a great team in the future.

Crystal Langhorne and Charde Houston (in addition to Renee Montgomery) were actually major reasons I wanted to watch this game. Both are top candidates for the Most Improved Player award and both could also make legitimate claims to an all-star spot at their position.

Last season, Langhorne looked like an athletic, but awkward center who would be something of a long-term project. This season, she’s playing as though we were just sleeping on her. More impressive than her league-leading offensive rebounding prowess so far this year, is the array of offensive moves she’s added to her repertoire. She’s scoring off drives, with double post moves, and hitting contested shots in the paint. She almost looks like a different player.

Charde Houston seems to just have put it all together this season and become more consistent. And by consistent, I mean close to dominant. Although Nicky Anosike and Renee Montgomery have gotten the headlines for winning last night’s game, Houston deserves a large portion of the credit as she did a little bit of everything – scoring off drives, scoring from the perimeter, getting offensive rebounds. She is an extremely impressive player and if she continues to improve along with the rest of this Lynx core, they will be a force for years to come.

The WNBA game is improving, even if it is struggling financially. I swear that just between this summer and last the talent level is increasing and as a result the games themselves are getting better and better. If there is any silver lining to contracting a team and shortening rosters it is that each team is probably more talented, player for player, than they’ve been in a long time.

It was my intent to post rookie rankings today, but after Montgomery’s performance last night and tonight’s upcoming match between the Chicago Sky (Kristi Toliver, Chen Nan) and the Phoenix Mercury (DeWanna Bonner), I decided to hold off and get one more look. Over the past few I’ve had a chance to see all the top rookies and have thoughts, but figured one more game of analysis wouldn’t hurt. Unfortunately, last night was the only time I’ve seen Marissa Coleman play, so I’ll have to wait until another time to give her a complete analysis. But I will say this – statistically, she might not be out of the running for Rookie of the Year.