Salamishah Tillet of theRoot.com posted an article today about Marion Jones, who gave a speech late last month at the University of Pennsylvania's "Race and Sports" series to commemorate the 37th anniversary of Title IX.


Jones, who is most well known for her success as an Olympic sprinter and subsequent drug-related downfall, was also a point guard for the 1993-94 University of North Carolina National Championship basketball team and later a surprise WNBA draft pick in 2003 by the Phoenix Mercury, though she never played.

If you are able to set aside Jones' now tarnished legacy, Jones delivered a potentially powerful message about her legacy, Title IX, and generations of black women before and after her. From the video above:

"Our continued responsibility is to prove to the world that women -- black women -- can excel and sometimes even exceed the physical and intellectual capabilities of our male counterparts and make the right decisions to preserve opportunities for greatness, not just for us, but more importantly the generations that follow."

Of course, one could easily dismiss the entirety of Jones' message as some kind of cheap publicity stunt designed to rehabilitate her image after making some poor decisions in the past that led to six months in prison. However, I believe that once one serves the time, we should not continue to subject them to a life sentence in the court of public opinion.

However, the point of the article goes beyond that -- not merely asking forgiveness for her past crimes, but for her inability to leverage her celebrity status for the greater broader cause of gender equity in sports and society at large.

Is this too large a responsibility for one woman? Probably. However, would it be too large a task for a collective of female athletes? 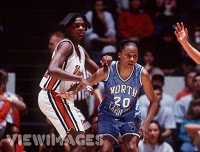 Tillet describes Jones' message about Title IX and its impact on black athletes. But she also highlights how Jones apparently spoke of her failure to leverage her sports celebrity even to help other address the gender inequalities in sports.

Instead of creating a dialogue with her fellow female celebrity athletes, such as Mia Hamm, Lisa Leslie, and Venus and Serena Williams, she said, she squandered her national media platform, engaging in behind-the-scenes competition for endorsement deals, magazine covers and interviews.


Yet, although Jones was not able to create a dialogue with her fellow female celebrity athletes, Tillet does mention a connection she has made with John Carlos, a black track and field athlete. Carlos and Tommie Smith, best known for raising their fists with black gloves on the medal stand at the 1968 Summer Olympics, spoke the previous night. Carlos and Jones embraced briefly near the end of the event.

What I appreciate about the article is that it highlights the opportunity beyond any individual sport or gender divide for athletes to come together to work for a more equitable society. The connection of Carlos to Jones to Lisa Leslie may seem tenuous to some, a ridiculous attempt to conjure up a political movement out of games that are supposed to be about competition and our personal entertainment, not our intellectual development.

But when you consider how Carlos and Smith leveraged their brief moment on the Olympic stage to make a statement of great importance to black society -- if not the U.S. at large -- in 1968, the potential to make an impact through sports is readily apparent. And Jones, by her own admission, failed to maximize that opportunity.

While WNBA women do not have the earning power of their male counterparts to fund even the smallest of community building efforts, the opportunity to build coalitions of female athletes to support one another and the up and coming generation of girls is certainly there.

The question is whether all black female athletes have the same sense of responsibility Jones has...and if they'll realize that responsibility before the window of opportunity closes.

Matt Fleggenheimer of the Daily Pennsylvanian got a quote from Carlos about Jones:

"She's come to the conclusion," Carlos said, "that the greatest invention of all time is not the airplane or the television or the teletype, but the simple thing on the back of that pencil: the eraser."

"She realizes she can make the correction to the mistakes she's made in life and move on. That's a gallant individual."

Despite her politicized speech, Marion Jones was unable to vote for President Barack Obama in the last election as the result of her conviction, as she told Oprah in an interview a few months ago.


While Tillet was quite gracious in her account of Marion Jones, world renowned journalist Philip Hersh had a different take: how can we trust anything Jones says knowing that she's already lied to us?