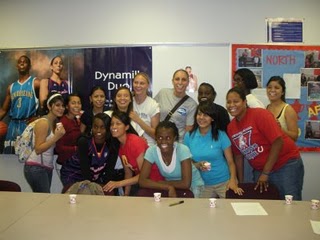 Diana Taurasi is looking forward to getting into a rhythm with the Mercury when the pre-season starts on Sunday.

In the meantime, she's certainly using her time wisely -- on Tuesday she visited North High School in Phoenix to promote fitness and nutrition as part of the NBA's Get Fit By Finals program.

In a political climate in which high-stakes testing and accountability have dominanted the national discourse about education, news of Taurasi’s visit is like a breath of fresh air.

While the explicit purpose of the visit was to promote fitness and nutrition, she implicitly promoted a model of good citizenship that is sorely lacking amidst a disastrous financial crisis. And of course, while the adults are busy bickering about vouchers, performance pay, and tweaking standardized tests, the civic and physical development of our youth is often ignored, if not openly dismissed

Adolescent obesity has tripled over the last two decades, so ’it’s never been more important for teenagers to make better food and physical activity choices, according to certified sports dietitian Tara Gidus, RD, a nutrition consultant to the Orlando Magic NBA team. That’s why Get Fit By Finals will call on teens of all activity levels to take simple steps to help improve physical fitness and nutrition – such as being active for at least 60 minutes a day and drinking 3 glasses of lowfat or fat free milk each day.

"Exercise and good nutrition helped me achieve my goal of playing in the NBA and maintaining the high-level of fitness required to stay at the top of my game, "said Taurasi. "Along with other top athletes, fitness and nutrition experts, I’m excited to help teens reach their own personal best and help them Get Fit By Finals."

Apparently, Tamika Catchings of the Indiana Fever – the 2009 Rev. Charles Williams Award for youth service in Indianapolis -- also visited Cathedral High School in Indianapolis as part of the program.

So what is this Get Fit by Finals program?

And why is it important?

Get Fit by Finals 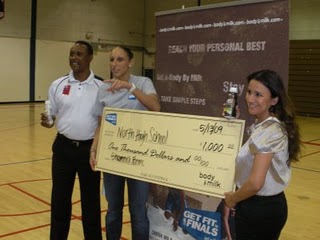 The program is based on the 2008 Federal Physical Activity Guidelines, which were signed back in September by the outgoing Secretary of Health and Human Services (under George W. Bush). Those guidelines include aerobic, muscle-strengthening, and bone-strengthening guidelines for youth, adults, older adults.

North and Cathedral High Schools are two of thousands of schools involved in the program that have received Get Fit activation kits that include NBA sponsored fitness and nutrition tools and tips as well as posters for school cafeterias and gyms. North High School also received a $1000 "got milk?" Get Fit Grant to help them implement health and fitness programs. There is an online "Personal Fitness Tracker" tool as well designed to help students log their progress and journal online.

Why is this program important?

The importance of the program is actually best articulated on the letter that came from former Health and Human Services Secretary Michael Leavitt:

There is strong evidence that physically active people have better health-related physical fitness and are at lower risk of developing many disabling medical conditions than inactive people.

Prevention is one of my top priorities. Although physical activity is clearly vital to prevention, it is easy for many of us to overlook. These Physical Activity Guidelines for Americans provide achievable steps for youth, adults, and seniors, as well as people with special conditions to live healthier and longer lives.

Although hardly a novel idea, an emphasis on the universal prevention of health problems instead of treatment would be a major step forward in our thinking about health policy. Starting with youth in schools through fitness promotion would theoretically save society money in healthcare down the line, especially for those on government programs.

While it’s great that sports leagues like the NBA and WNBA are doing this work, one would certainly hope that one day we as a country would value the future of our children enough to systematically promote healthy lifestyles as a means of preventing future health problems.

However, in the current economic and political climate, promoting health – not to mention citizenship (which is known to promote school engagement which increases the likelihood one might graduate) – in schools will clearly be a tough sell. Peter Levine writes the following about increasing youth media production in schools as a means of promoting youth civic engagement:

To influence educational policy, I believe we need randomized field experiments that measure the impact of digital media creation on relatively hard measures, such as high school completion or valid and reliable measures of skills.

If such experiments showed positive results, then NCLB and the standards movement that
it typifies would provide some leverage. But these laws also create a challenge by focusing on basic literacy and mathematics as measured by pencil-and-paper tests. That focus makes it harder to devote instructional time to media production; media skills are not directly tested, yet what is tested is taught. Nevertheless, NCLB and other current policies could accommodate youth media work if we could show that providing creative opportunities is an efficient way to keep kids engaged in school.

Certainly, if we could find a way to measure the impact of youth media or health promotion programs, it would be easier to influence educational policy.

Of course, the idea of hard science justifying youth development outcomes like skill acquisition or healthy lifestyles – clearly things that are difficult to quantify to begin with – is almost silly to the point of being counter-productive. Even with intensive longitudinal research, one would end up with sketchy and inconclusive data.

What counts as a healthy lifestyle? What about other variables that lead to "health problems" outside of an individual’s control?

At some point, we will just have to decide as a country that health promotion is just important enough to make a leap of faith and promote it on a wide scale.

One question about the program: what type of follow-up support could/will the W/NBA provide to the schools that receive with grants?

I find it absolutely hilarious that Wolverine is also one of the celebrity sponsors in this thing. I mean, if you already have adamantium bound to your skeleton, do you really need milk that much? That just seems like a stretch. ;)

Please note that I’m not putting Taurasi on a pedestal – I actually already did that last year. Regardless she, Catchings, and the WNBA should be commended for their work with this program. Watch though -- I might start the MVDee campaign early this season...

Of course, it’s also worth noting that the whole Get Fit program is ultimately about promoting milk sales:

But come on – there are many worse things that the WNBA could be tied to…(e.g. Exxon). 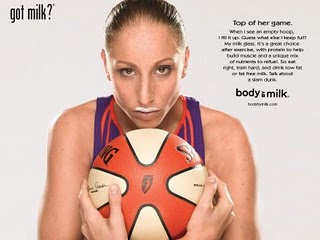