Why We Will Never Know As Much As We Think We Know About a Draft Pick: A Lesson From the Success of Michael Redd

Share All sharing options for: Why We Will Never Know As Much As We Think We Know About a Draft Pick: A Lesson From the Success of Michael Redd 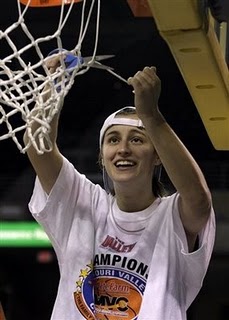 Kristi Cirone’s situation – going undrafted and then being picked up by the Connecticut Sun with an outside chance to make the roster – made me think about just how completely unscientific this whole drafting process is…and how every year some player defies the odds.

Well, yeah of course, says the collective voice of the handful of NBA fans reading this blog.

He’s an NBA all-star, an Olympian, and one of the league’s top shooters.

What I’m wondering is if anyone remembers the Michael Redd from Ohio State – the high scoring "shooting guard" who could not, you know, shoot. People can look back now and do these "draft do-overs" and say look at how silly people were to pass on Michael Redd, but realistically, there was no reason to believe he'd become this type of player.

It’s what made his decision to leave college in 2000 after his junior year a little surprising to me. Really, what good is an NBA shooting guard that can’t shoot? And it’s not like he was delusional – he knew he couldn’t shoot…or as he said, he had an "inconsistent" shot ("inconsistent" being code for "I say a little prayer every time I put one up there").

Asked about the strengths and weaknesses the pro scouts saw in him, he said, "They liked my size. They liked my quickness for my size.

"Ball handling wasn't an issue. It's not that big a deal. The negative thing is shooting. They want me to be more consistent on that. But nobody's a great shooter going into the draft. You have to work on that."

What an attitude – either Redd had already looked into the crystal ball and seen his metamorphosis into an NBA all-star or he is just one of the most confident players ever to enter a draft.

Unfortunately, NBA GMs did not necessarily feel the same way on draft day – Redd was drafted 43rd by the Milwaukee Bucks and struggled to even get in a few games his first year playing behind perennial all-star (and one of my favorite players) Ray Allen. Fortunately, the Bucks stuck with him and we know the rest.

Anyway, I’m not saying Cirone is another case of Michael Redd -- she might not make a roster this year. But what I find interesting is that in this drafting process we never know as much about player as we think we know (even if we crunch a whole bunch of fancy statistics). Ultimately, we have no way to know how much a player’s desire, passion, and will power will influence their success in the pros. It would be great if we could find a way to identify every future Michael Redd, but in the meantime I think it’s worth just appreciating the story as the newest crop of WNBA rookies prepares for the season.

I knew Michael Redd couldn’t shoot just from watching collegiate games. But for those of you who didn’t see him or can’t find highlight film of his misses, we’re talking about a shooting guard who shot 43.6% from the field and 31% from the three-point line. He was by no means a marksman.

But how does one go from that to world class All-Star shooting guard?

After being drafted #43 by the Milwaukee Bucks and going on to average 2.2 points per game on 26% shooting, I just kinda said oh well and moved on. Afterall, he and I are about the same age and I had just been accepted to the University of Michigan for grad school…so who cares about an unsuccessful Buckeye?

Then something somewhat miraculous happened – sometime between his first and second seasons he developed a shot. And a good one. He even became, like, a shooting threat. I thought yeah, whatever, fluke (by his 2001-02 breakout season fully marinated in Maize and Blue). But no – his career field goal percentage is about 45%. Though he has not repeated the 44% 3 point percentage of his second season, he has shot 38.6% for his career, well above what he shot his senior year in college.

Maybe he just likes the challenge of longer shots against more athletic defenders? Many people might attribute his improvement to playing behind Ray Allen his rookie season, who clearly has the most beautifullest jump shot in this world. Maybe he just has a chip on his shoulder after being dissed on draft day by the NBA’s evaluators and decision makers.

But it’s hard to deny that part of it is just the completely unpredictable intangible factors of hard work, desire, and pure passion.

The great thing about Michael Redd’s story just after a draft is that he completely defies our tendency to put players in boxes or assume we know what they are based on watching an always incomplete body of work or crunching a few vacuous stats.

So in light of my last post, I just want to make clear that I didn’t go through the effort of crunching all those stats because I think there is some perfect formula to understanding basketball performance. Further, it’s not like there’s some statistics vs. observation dichotomy where one can be privileged over the other.

To stat haters who only trust their own eyes, sometimes, even our own observations of players completely deceive us – NOBODY predicted Redd as an all-star. I like stats because I’m a basketball junkie, plain and simple, and it’s just one more way to try to understand the game. It's a nice complement to observation...and claims based on observation should be supported by stats.

Knowing that we cannot possibly predict the 2009 WNBA Michael Redd-like story, I wonder, who will be this year’s Michael Redd in the WNBA? The player we all thought we had figured out even though they had another agenda?

Not Quite the Arenas Story…

For those of you who are wondering whether this is the same as the Gilbert Arenas story, let me clarify the difference. Arenas’ fall to the second round was a bit of a surprise -- he was expected to go in the first round by many. Although there were question marks around him (particularly regarding whether he had the height to be a NBA scorer) it was clear he was a solid NBA player to most analysts. Sure, he’s a little quirky, but the guy could play ball and should have gone higher. And he showed what a mistake GMs made in his rookie season once my beloved Warriors figured out a way to get him on the floor.

So although the Arenas story might get more press (and even resulted in a new salary cap rule for the NBA), the Redd story is special because he’s a player who literally grew as a player and added to his game in the jump from college to pro.

Either way, it's also worth knowing that these stories of second round (or undrafted) gems are somewhat rare. Heather Allen and Paul Gearan wrote a nice article on DraftExpress.com looking at second round picks' success in the NBA. You're lucky to even get a rotation player out of the second round. It would be interesting for someone to do a similar article about the WNBA. Shorter drafts, of course, but I would assume that the results might be similar...

It probably has as much to do with the situation as it does the player's attitude, but it's even more unpredictable once you get past the first round or so.

I don’t know enough about Cirone to identify her flaws, but it seems like she was more overlooked as a result of playing for a smaller program than punished for her weaknesses… so could she be this year's draft surprise in the WNBA?

So here are my questions for those who know the WNBA better than I:

1) Has there been a Michael Redd-like case in the WNBA (in which a player went from being a rather flawed college player to an effective pro)?

2) Who is this year’s flawed WNBA rookie who has a shot to learn from a veteran and vastly improve upon that weakness?

3) Who is this year’s second year player who like Michael Redd struggled with the glaring flaw in their first year but had time to develop behind someone else and have a potential breakout season?

Of course any answers one came up with to questions 2 & 3 would be pure speculation.

There’s no real way to predict a Michael Redd-like transformation. But isn’t that the fun of sports – speculating and then observing closely to find the unknown, unpredictable outcome? I think so…and it gives me something to ponder while WNBA rosters get settled.

One caveat for the Redd story: I’ve often thought that when folks evaluate NBA rookies who came out early, they have to be given time to make up for the years lost in college to develop. In other words, since Redd skipped his senior year, we have to give him a grace year for the development time he missed out on. (This simply reinforces my opinion that most college players should stay four years.) Therefore, one could argue that Redd just matured, whereas WNBA players complete four years (usually) before coming out and are therefore more polished and less malleable once they come out. So it could be that we won’t really see many WNBA versions of the Redd story…but I thought it was interesting.