What Difference a Year Makes: Why Ahistorical Representations of Sports are Bad for the Game

Share All sharing options for: What Difference a Year Makes: Why Ahistorical Representations of Sports are Bad for the Game 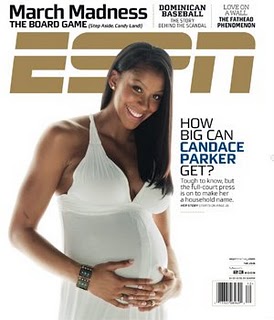 If you pay attention to women's basketball, you've probably heard about that March ESPN the Magazine article that included a cover photo of a pregnant Parker.

Of course, this led to some commentary about the state of the WNBA, female athletes, and marketing. The WNBA even made a good move by posting an interview with the editor of ESPN the Mag to get some insight into the thinking behind the article. But there were two articles in the last week or so that really caught my eye.

Of course, there weren't really any new arguments added to the discussion... really just people rehashing the same old arguments in new packaging.

However, the big difference this time around is that given all the media attention given to Parker and the Olympics last year, speaking from a place self-imposed ignorance about the WNBA no longer carries much credibility. Parker's arrival on the national (and international) sports scene last summer was one of those special moments in sports history that even the below-average lunkhead male would have had a hard time just ignoring. This does not mean we suddenly have a whole lot of enlightened, gender-conscious WNBA commentary...it's just a new sort of ignorance I guess...

So that's progress, right? Maybe people are watching and now making "grounded" critiques of women's sport? Eh...partially. What really bothers me is how people insist upon accounting for the WNBA's struggles by scrutinizing the athletes rather than thinking through the business of sport. What we end up getting is these analyses that exist within an historical vacuum and lead to conclusions that don't really add up when you try to re-situate them in reality.

Call me crazy, but I just happen to like arguments that are based on some form of real evidence... so here are some of the thoughts I jotted down.

First, before jumping on the easy critique bandwagon, ESPN the Mag should be applauded for putting a female athlete on their cover in the off-season. It is not necessarily unprecedented, but let's admit it's rare, especially for team sport athletes.

Second, I think getting to know these athletes as people is a valuable endeavor, so the ESPN article was good in that respect as well.

So the positives aside, what has obviously attracted attention about the article is the discussion of Parker's cup size in the opening paragraph.

So going back to the issue of getting to know the athletes, here's what I think we have to consider: if Parker herself brought up this issue of cup size, then it's not so much a question of a sexist double standard to mention it -- it occurred in the interaction and is therefore something worth accounting for in the description. My question is why frame the article by sexualizing Parker given that this is a sexist society? Couldn't that have waited for a few paragraphs?

Editor-in-Chief Gary Belsky claimed in the WNBA.com interview that they put Parker on the cover because she ESPN the Mag "...is a magazine that makes its living by predicting the future and looking forward." OK, fair enough. But wouldn't it have been neat to start looking forward by trying to shift the way we think about female athletes rather than going through the same routine of interpolating them through a beauty standard?

We can't blame ESPN the Mag for that -- I don't think anyone has the "right" language to talk about female athletes yet. But at the very least, we need to work to find ways to anticipate the consequences of certain framing decisions and work to mitigate them. Where better to start than our professional wordsmiths? I'll look forward to seeing what ESPN the Mag does the next time a female basketball player graces their cover...and hopefully we won't have to wait too long.

Framing Sets the Stage for How We Discuss Women's Sports

So anyway, moving beyond the context of the ESPN the Mag article, here's another problem with how we discuss women's sports: since we don't really have a good way of discussing or understanding female athletes without blatantly objectifying them, we instead try to compare them to male athletes.

I think I've ranted about the tendency to compare female athletes to male athletes before, so I won't go deep into it. But I think this tendency along with our lack of familiarity with seeing female athletes in the public eye leads to these strange ahistorical arguments.

There was a March 31st article in an Illinois State school newspaper (ok, I know... I'm not going to expect too much from a student newspaper) with the headline, "There's no stopping it...men's sports are better than women's sports". The author claims to be taking a balanced approach to understanding why women's sports -- like the WNBA -- are struggling by essentially saying the following:

It is not that people do not want to watch a sporting event that showcases all women, it is that people would rather spend more time watching (who they by and large consider to be) the best.

It is not that people do not want to watch a sporting event that showcases all women, it is that people would rather spend more time watching (who they by and large consider to be) the best.

Next, it is the level of difficulty. Many people watch sports to see spectacular plays that they could never actually perform themselves. This typically happens more frequently in the men's game.

Whether it is basketball, football, baseball, etc., people want to be entertained, and a "highlight reel" play has a greater chance of happening at a men's game.

Women's sports, while also performed at a proportionately high level, tend to place a much greater focus on the fundamentals of its game (or at least that is what is advertised).

So while execution may, in fact, be equal to or possibly greater in the women's game than the men's, it can become boring. And the major networks cannot afford to televise boring.

Then in the next paragraph he presents an argument that I find quite important:

Brand loyalty is also a major reason behind the masses preferring one game over the other. Although, both the men and women played their first official game in the same year (1892), their major league equivalents (NBA and WNBA) saw the men's game evolve into a televised program long before the women. So to expect fan and media coverage to drastically even out, even though the WNBA did not start until 1996, seems a bit unreasonable.

So here's the contradiction and the reason I think situating these arguments historically helps a little.

Essentially his argument is as follows:

People like to watch the best play a given sport.

People like to watch the best because they make spectacular plays.

Men are more likely to make spectacular plays than women.

Women are comparatively boring and therefore difficult to market before they're boring.

But then he acknowledges that the WNBA has only been around since 1996...exactly 50 years after the NBA (founded in July 1946). If we buy his argumentation, we might be led to the assume that people immediately took to the NBA because it was spectacular. But that's not true at all.

If you look closely at the development of the NBA (or the NFL...or NHL for that matter) the trend is much different than that. In the beginning, people thought the NBA would never compete with more popular sports like boxing (yes, boxing!) and baseball. Once the NBA got past that initial hurdle of becoming a viable sport, it hit a slump again in the 70's which some people associate with an increase in black players along with owner corruption. It wasn't until the Bird-Magic rivalry of the 80's that the NBA really took off.

Until we find ways of presenting legitimate narratives about female athletes and female team sports, they will continue to remain unmarketable because people are simply too steeped in thing about women as sex objects. The NBA found gold by doing two things: 1) embracing the good fortune of having a bi-coastal, bi-racial rivalry between Bird-Magic and 2) deciding to market individuals rather than teams. People connect with stories. They talk about stories. And they get addicted to stories. It just so happens that the stories that work best are those that resonate with people's existing sensibilities...not ones that challenge their pre-existing ways of thinking about the world. That's quite a hurdle for women's basketball to overcome...

"The Pimping of Candace Parker"

So given the need to create new narratives, can we blame "Team Parker" and the WNBA for going along with this ESPN the Mag story...especially prior to knowing that Parker's C cup would take on a prominent role? I say no.

There was a pretty good article at the Bleacher Report last week with the headline "The Pimping of Candace Parker". In it, the author claims the following:

This transitions to the second point—women's sports are "foreign." It can be seen as different or foreign from men's sports. Trying to sell the WNBA to men who are used to seeing rim-rattling dunks, no-look passes, ankle-breaking crossovers, and backboard-pinned blocks is similar to attempts at sell soccer to the football-crazed United States.

Agreed. But then he concludes with the following:

However, the selling of these leagues are doomed to failed thanks in part to the difficulties in expanding its audience to include a male demographic who have a hard time buying women as athletes or their leagues as comparable to male leagues.

The desperation to sell women's professional athletics in the United States must resort to the unfortunate pimping of its talented (and beautiful) athletes, such as Candace Parker. Unfortunately, there are not enough Johns out there to buy the product.

For the record, I agree with most of what the author says... but I think the conclusion could be refined. Both male and female athletes are "pimped". The difference is that within the definition of masculinity is included some notion of physical prowess and dominance. That simply does not yet exist within the "feminine mystique" that most people have bought into.

The difference is that within the context of society we understand these as unproblematic attributes of maleness. The challenge then is not to sell women as athletes separate from their gender but to learn how to include "female athlete" within our entrenched understandings of femininity. That is going to take time and conscious effort on the part of those who write about and frame news about female athletes.

It's not a failure of the athletes. It's not necessarily a failure of the WNBA in the way they're "pimping" their athletes. It's a matter of finding a way to integrate the narrative of a given sport within the epic social narratives we've already accepted. That will be harder for women's sports because we as a society do not yet accept women as athletes. But we cannot pretend that anybody has ever accepted a professional sport purely on its "merit" of being "spectacular".

The problem the WNBA faces has as much to do with sexism as it does with the fact the we have become a hyper-consumerist society that buys in order to establish and reinforce our sense of self. Instead of continuing to make arguments about whether women are spectacular enough to be accepted as athletes -- meaning we would need more Parker-types who can dunk -- I think we need to start thinking about developing a language that helps us embrace athlete within our notions of femininity.

And perhaps that will allow us to find other ways to frame articles about female athletes other than discussing their cup size...

Female Athletes: Be pretty, but not sexy. Or pregnant.
http://contexts.org/socimages/2009/04/21/female-athletes-be-pretty-but-not-sexy-or-pregnant/