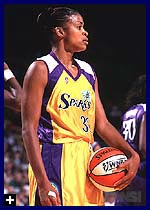 There was a great article by Kevin Broom on RealGM.com the other day about player development in the NBA that focused on Washington Wizards forward(/center) JaVale McGee, son of retired WNBA player Pam McGee.

Apparently, despite Ms. McGee’s support for her son, there was apparently some frustration about the way the Wizards used her son. Ms. McGee’s alleged frustration with the Wizards wasn’t what inspired Broom’s article (at least he does not mention that), but in his discussion of McGee’s rookie year I think he poses a good question that could be applied to the WNBA as us fans speculate about roster decisions: How do youngsters develop into quality basketball players?

The issue usually plays out as follows in the NBA, according to Broom:

For fans, the process is often maddening. For many, "development" is a simple matter — get the young players on the floor and let’s see what they can do. After all, the team can’t possibly do any worse by playing the youngsters, some think.

Yet coaches — even those like Tapscott, a player development executive before he replaced Eddie Jordan — resist the call to give young players a set number of minutes. 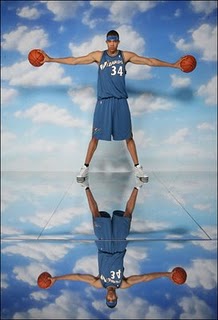 Obviously, Ms. McGee believes her son is worthy of minutes right now – she called him "evolutionary" in a February interview conducted between her and her son. But even when a player displays athletic ability, shows flashes of brilliance on the floor, and has potential to be "evolutionary", what is a coach supposed to do with them? How do you balance winning games the need to develop talent?

The Wizards were miserable this season, so the question of development took on even greater importance – if you’re not in contention, shouldn’t you be giving the rookie minutes so he can develop? The Wizards losing ways made McGee a natural poster child for these questions of player development.

"I love Javale," says the former Eastern Conference player development executive. "He will be an All-Star. He’s someone who’s going to lead you deep into the playoffs, maybe to a title. So when I see Javale getting 10-15 minutes and someone like [Darius] Songaila getting 28-30, I don’t know what that is. Their roles should be reversed. Javale should be getting 30 minutes a night, minimum."

Broom does a pretty good job of presenting different perspectives on player development, as applied to the NBA. So now I bring the question to the WNBA.

The WNBA context is obviously very different, but if you’re a team like the Chicago Sky, for example, what is the most appropriate plan to bring players like Kristi Tolliver along? Especially when she’s playing alongside other young players like Armintie Price and Sylvia Fowles? What of other players? How might they be brought along?

Late add: Ultimately, the biggest question might be this one: is the WNBA well set up to develop young players? And if not, does that hurt the league?

Of course, there are some significant differences between leagues that render some of the NBA discussion irrelevant to the WNBA:

1) Players like Javale McGee who come out early (he left college after his sophomore year) present a bigger development challenge than players who come out after their senior year…as most WNBA players do.

2) NBA rosters are capped at 15 (3 injured reserved) whereas the WNBA just cut rosters from 13 to 11 players. So keeping players aboard in the name of "long-term development" actually becomes somewhat unrealistic.

3) The NBA has had a Developmental League around since 2001 that teams can send first and second year players to if they aren’t ready for NBA minutes. The WNBA has no such league, but players do play in Europe in the off-season which could be seen as a developmental opportunity, even with shortened rosters.

However, I argue that these points – especially #2 – make the question of player development all the more important to the WNBA.

If players who aren’t yet ready for primetime are just cut, what does that mean for the future of the league? Will veterans on bad teams be cut in favor of younger more promising players who might develop?

It stands to reason that a player like Toliver will not only make the Sky’s roster, but will also see minutes. But what if she struggles to run the team at point guard? Do the Sky, who should be in playoff contention, bench her and make a run for the playoffs? Or do they throw her into the fire, struggle a bit, and focus on developing her for the future?

Moreover, what about players drafted lower who aren’t quite filling a hole the way Toliver might? If a teams decide not to cut them, should they play them or bench them and make them wait?

Broom presents a few factors that some NBA coaches may take into account:

Talent (Does the player have the skill set/athleticism to compete?)
Performance (Does a player make the most of the minutes they do get?)
Execution (Are they able to execute the way they’re expected to within the team concept?)
Knowledge (e.g. offensive/defensive sets, terminology, spacing, personnel)
Work ethic (Are they working hard in practice or the weight room to improve?)

In the WNBA, things might just be simpler – players come out much more polished after a full college career and so there is not quite as much guesswork involved in player development. But we’re still talking about 21-22 year olds. Chances are, they will have some development to do.

In the end, it might not matter what a player did in their four years in college or what we as fans think about them based upon their 2-3 minutes of court time. One or more of the factors that Broom makes note of might make a coach’s decision to keep a player off the floor perfectly reasonable.

Similar to the argument Chantelle Anderson has made with regard to Chamique Holdsclaw’s situation, occasionally there are things that go on in professional sports that fans just aren’t privy to. We’re not in the locker room, we’re not in practices, we don’t really notice when a player is just not following the game plan.

For whatever it’s worth…

I hope the Sky bring Toliver along slowly, even if she shows that she can play starter minutes. I think it’s important to play through mistakes, but it also seems that for her long term maturity as a professional point guard, it might be helpful to spend some time watching just to get used to the game.

I know this analogy is not perfect but I see the point guard position as very similar to the NFL quarterback and I think the NFL has it right in the way many teams sit very talented quarterbacks during their rookie seasons so they can just learn the game…even if the team suffers for a year and the other alternative is mediocre. In the long run, giving a rookie that time to learn the game and work through practice might be best…in a way, I think that’s what the Lynx did with Candice Wiggins. Though I thought it was bizarre, it might end up being best for Wiggins’ career.

Ultimately, there’s no one size fits all answer to this question of how to bring along a player.

Pamela McGee: The Challenges of Being a Proud "Basketball Mom"
http://rethinkbball.blogspot.com/2008/06/pamela-mcgee-challenges-of-being-proud.html

I’m finding the NBA playoffs boring and predictable…which is, I suppose, why I’m busy applying a NBA story to the WNBA. Wake me up when the Cavs meet the Lakers in the Finals.