Curious About Kristi Toliver: Is She the Right Pick For the Sky?

Share All sharing options for: Curious About Kristi Toliver: Is She the Right Pick For the Sky? 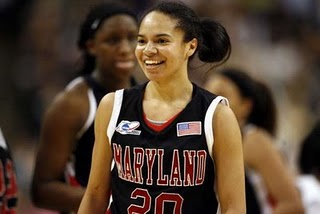 So early on last summer I got really interested in seeing better draft coverage for the WNBA.

I was going to watch college games.

Do a WHOLE mock draft.

I only watched a few games (few with any top prospects).

I didn't even bother with stats (thankfully, the Pleasant Dreams blog did do some last summer, which I find helpful).

So now I sit here two days after the draft almost completely clueless about the newest WNBA rookie class and lamenting the fact that I didn't have the guts to cancel the damn meeting ("Um, I'm sorry, but I really have to watch the WNBA draft right now. Can we put off the meeting about the grant proposal due Tuesday? Thanks!").

But what really sucks is looking around for post-draft analysis on the WNBA. Rebkell is probably the best source on the web for any of that (since the most knowledgeable WNBA fans -- knuckleheads notwithstanding -- are writing there). And kudos to WNBAdraft.net and Pleasant Dreams for managing to stay on top of the draft since the summer.

(If I'm missing someone's work please do let me know)

So here's my tiny contribution to the WNBA draft blogosphere: a very, very surface level analysis of the Sky's first round selection of Kristi Toliver..

Why the Sky Fell...Out of the Playoffs

I'm not on the Sky's staff (obviously) so it's not like I think my assessment of their team is really the final word... but just from feedback I got from Sky fans last season here is what I can say:

1. The Sky never really figured out how to integrate Sylvia Fowles into the offense (despite an amazing Olympic performance) or use Candice Dupree and Fowles together effectively.

2. The Sky struggled in the half-court (click here for more) due to their inability to establish a consistent post game and inability of their guards to penetrate...

3. As a result, I referred to the Sky as a "perimeter-oriented" team because they would resort to passing the ball around the perimeter looking for a shot opportunity as their offense continued to stagnate. But as one Sky fan pointed out, that's probably an incorrect assessment -- they weren't really firing up a lot of perimeter shots and certainly weren't making a lot. Really they just were a team that was not very proficient at creating offense...which sort of circularly leads right back to point #1.

So what were the Sky's needs?

So to me the Sky were set at three positions: center (Fowles), power forward (Dupree), and combo guard.

Strategically, it seems like they needed to get the ball in the post more often and establish a post game in order to open up their perimeter game (moving the ball and forcing the other team to double down or get torched in the paint).

In addition, given the mobility of their bigs -- Fowles and Dupree -- an uptempo game could really help them keep opposing defenses off balance.

What I really thought this team needed to bring it all together was a pure facilitator that could push the ball, see the floor, penetrate in the half court, and distribute the ball to open scorers cutting to the basket or open on the perimeter.

Jia Perkins was much more effective at this than Dominique Canty, Quianna Cheney, or KB Sharp for the second half of last season...but she is still clearly ideal in the role of a combo guard scorer who can be a very good secondary ball handler.

OK so there are two ways I see to look at the Sky's needs:

a) They are so inept at establishing a post game that they should just resign themselves to being a perimeter-oriented team and add another perimeter scorer...

b) They should work to establish a post game because they potentially have one of the best one-two post combos for years to come and therefore should add a pure facilitator to get them the ball....

My choice? B -- find a facilitator and make teams stop the post threats. Their choice? Apparently A.

What Kristi Toliver might tell us about what the Sky are thinking...

Take this with a grain of salt as I have yet to see Toliver play a full game...

From everything I've read about Toliver, the Sky are planning to rely on perimeter scoring. What leads me to believe that? It just seems that Toliver is one of those scoring guards who can pass, but would generally look for her own shot first.

Again, I say that not having seen Toliver. Pleasant Dreams had Toliver ranked as their #3 prospect as of his early season prospect rankings (would be interested to see his updated numbers if he has the time to plug 'em in). So she could be a VERY good scoring guard.

But here's what I don't get -- unless she's a Becky Hammon type guard (who spends a good bit of time off the ball, by the way) is this really the type of point guard the Sky needed to get Fowles and Dupree involved in the offense? Was she really the best point guard available...much less the best player available?

What really troubles me is this list of weaknesses from WNBAdraft.net (points of concern in bold):

Lacks the basketball IQ to manage a pro team (in particular decision-making and knowing personnel); needs work on the defensive end, which stems from being too thin and not strong/quick enough to guard position; shot selection can be horrible at times; shoot first, pass second nature won't always work in the WNBA; handle can get sloppy and can easily be picked off by average college defenders; prone to high turnover numbers, compounding of mistakes, and losing composure (does not hide frustration well); commits bad reach fouls on defense due to lack of defensive fundamentals; lacks creativity in the half court (not a playmaker);

Doesn't a player like that seem like the opposite of what the Sky need? Aren't those the very problems Sky fans suffered through for most of last season?

Sure Toliver could grow as a player, this assessment could be completely off-base (it's almost impossible to predict college to pro success accurately 100% of the time) , and maybe her positives just outweigh the negatives.

I guess I need help seeing how Toliver was the best pick for the Sky. Would Renee Montgomery who was selected just after Toliver have been a better pick? What about the hole at the three position? If they really wanted Toliver that badly, couldn't they have traded down slightly, grabbed Toliver and something else?

In any event, it will be fun this year to keep track of Toliver and the Sky in the context of their bright future. Hopefully this squad can gel together and make some noise in the league this season.