How might reductions in local newspaper coverage affect women's basketball? 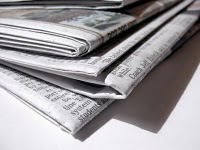 It's becoming increasingly clear that nobody is safe from the current economic crisis and newspapers have been hit particularly hard.

Newspaper readership has been declining for years now and in the middle of an economic crisis, they are pretty much forced to make staff reductions.

As documented by Michael Arceneaux of theRoot.com, even recession writers (Lou Carlozo of the Chicago Tribune) are being cut in response to the recession. And in a climate where the people covering the recession become victims of he recession, you can bet sports writers will be equally -- if not more -- affected.

Bill Benner of the Indianapolis Business Journal writes about the impact the current economic situation my have on sports journalism:

Nonetheless, I worry that the difficulties facing daily newspapers might force them, here and elsewhere, to use stringers or generic wire copy more often. I worry more that readers won’t notice or care.

Then again, we are transitioning into a new age of information dissemination, one cluttered by blogs, Web sites and 24-hour cable coverage. Sports, long considered the "toy department" of journalism, could be an easy target for cost-conscious accountants and editors.

So it is not unreasonable to believe that that the economic downturn could have an adverse affect on the WNBA in comparison to men’s sports. Of course, that problem is not new, as described in an AfterEllen.com post last week:

It has been a catch-22 for women's professional sports teams for decades: newspapers and magazines won't waste space on leagues with no fan base; leagues can't expand their fan base without media coverage.

So for a league that desperately needs to promote narratives about women in sports, how might a reduction in newspaper coverage hinder that process? How might blogs, twitter, and other Web 2.0 or social media make up for the lack of newspaper coverage?

Lack of access is not helpful to the WNBA

Whatever you might think about the state of current WNBA coverage in newspapers, professional journalists have one massive advantage that even the most dedicated blogger might have a difficult time matching: a press credential.

Anyone – ahem, me? – can sit at home and spend time writing about watching WNBA games. What we don’t have is that behind the scenes perspective.

Access to press conferences, the locker room, and building relationships with players and coaches are vital to a sport’s ability to construct narratives that include character development as well as reports on the game action that we can all see from the stands, the television or a webcast.

To take a page from sports history, Howard Cosell’s relationship with Muhammad Ali is arguably as important as Ali’s greatness – while Ali performed, Cosell framed the narrative and presented it to the audience (reciprocally, one could argue that Ali is therefore among the most important figures to sports journalism because without him, Cosell would not be the legend he is today).


Cuts in professional journalists covering the teams means equal cuts in the amount of privileged information fans get about the WNBA. I would argue that the stories that we get beyond the action on the court are absolutely essential to building a sports brand. I happen to think print journalists are vital to establishing that. I also think there are alternatives that might help.

(Please do not forget the brilliant original song)
I have written a few pieces in the past about the role that Web 2.0 media plays in building the WNBA brand, engaging fan voice, and shaping the way we see the game. And the WNBA is definitely making strides in terms of how they use social media, as described by AfterEllen.com:


WNBA teams started their social media blitz earlier this year, offering tickets to people who joined team fan pages on Facebook. They brought it with a league Twitter. They asked each team to set up their own Twitters (see below). And, perhaps most importantly, they encouraged individual players to begin Tweeting about their teams, their lives, their training, their breakfast, anything to forge a connection with fans.

Yet I would argue the WNBA could still do some tiny things to better utilize the social media it is working with. Women’s Professional Soccer is still by far one the leaders in utilizing social media if you ask me.

It’s not just about having a Facebook/MySpace presence or having a YouTube page but making people aware of those things and, you know, actually making them seem like they are an integral part of what the organization does and how it builds community.

Case in point: from the front page of the WPS website, I can find 8 different ways to connect with the league on the main navigation bar. It’s a button even…that says connect.

The WNBA has both a YouTube and Facebook presence but you have to scroll down the page to find out about the Facebook link and after a few minutes of looking, I have yet to find a link to their YouTube page.

The issue here is not just about having these social media opportunities available, but somehow making them visible and easily accessible to consumers…ahem…fans. And to some extent they are doing that, in particular with ticket giveaways on Facebook.

So I wholeheartedly agree with what Megan Hunter at Because I played sports wrote in her coverage of the WNBA draft about how bloggers could be instrumental in the growth of the game:


While I realize that there is much more research to be done, I know that the most important thing we need to do as ex-players, moms and female athletes is to get people to the games and start taking control of conversations.

We need to create one of the biggest word of mouth campaigns that has ever been created - one that will save WNBA and create opportunities for years to come.

With the economy shaving away at the future of the league, the time is now for us to step up to the plate. Now that the WNBA is open to feedback and willing to engage transparently with the public, I believe we can help turn this thing around.

But the key question for the WNBA is how do they take that energy and integrate it into what they do?

Furthermore, if the next move forward is for the web to become "invisibly present in everyday appliances" (see video below) how can the WNBA be sure to infiltrate the collective sports consciousness? (This by the way is a scary thought to me, but I caution that it’s not George Orwell that will be rolling over in his grave as much as Aldous Huxley – the control of society through learned desires…scary).


Among the many things WPS has done well in terms of its marketing, I would argue that its Fan Corner social media site is an excellent example of an attempt to encourage and formalize fan involvement in the game.

Of particular relevance to the issue of blogging, they have a section on their social media site specifically for fans to create blogs. Of course these blogs aren’t as customizable as your average Blogspot or Wordpress blog, but it provides a space for fan voice that is somewhat unique. Most importantly, it encourages fans to consolidate that voice in one place, without controlling the multitude of voices out there. (Note: the Phoenix Mercury already have a social media site for their team -- Cafe Merc -- with 247 members)

Idea – could the WNBA have a list of blogs they deem valuable listed in some sort of space on their website? Would it be that difficult to have a feed with recent fan blogs aside from the "approved" fan bloggers already there?

I would argue that WPS is leading the way in this social media blitz and the WNBA should follow despite its current progress.

"Nothing from nothing means nothing"


Ultimately, I suppose my message about the impact of reductions in newspaper coverage on the WNBA is as follows (and, yes, partially inspired by Billy Preston):

If newspapers were not widely or consistently covering the WNBA to begin with, then the WNBA does not have much to lose from reductions in newspaper coverage.

However, the increasing reductions just make it imperative that the WNBA does figure out how to use social media effectively and quickly. As "traditional" media becomes even less reliable, you can bet that leagues like the WNBA (and WPS) will get even less publicity.

Of course, this is all uncharted territory – nobody has the perfect solutions for how to use Web 2.0 for marketing a relatively young (niche?) sports league. And that is all the more reason for the WNBA to get as creative as possible with how it encourages and channels the energy of its fans.

If the WNBA needs coverage, then what of a new women’s league like Women’s Professional Soccer? I’m curious about their outlook given that they are starting up in the middle of a terrible economy. It would be terrible if the league’s ability to succeed was stifled by the unfortunate coincidence of launching when the economy is struggling…

Fantasy job musings: I was musing with a friend this weekend about how my fantasy job before getting all tangled up in thinking about racial inequality in education was sports writing. And I would gladly drop everything and write for a WNBA team (*cough* ChicagoSky *cough*) this summer if they covered travel and basic living expenses (no nachos and beer, I promise). Yeah, ok, that’s presumptuous – there are probably hundreds of other folks who would "glad drop everything and write for a WNBA team this summer". And why on earth would someone want a job that is likely unstable and cut more often than created? But hey, worth a try…right?

Response to fantasy job musings: So the logical response from my friend about this fantasy job of being a sports writer was laughter – I mean seriously, leaving graduate school to cover a game? But honestly, my reasoning is simply that I enjoy basketball and as I’ve tried to demonstrate in the past, I do believe that the WNBA is valuable as a tool for challenging gender inequality simply by the way it could shape perceptions of women and what "womanhood" means. I realize that could be trivial – the father of a girl I dated in high school remarked to me the first time I had dinner at their house, "Back in my day we were protesting Vietnam and now the biggest thing you can write about is sports?" OK, fair enough – sports are not the biggest issue in the world. I know that…but everyone has to find their niche right? I like basketball…and think some good could come someday from writing about it…who know