The X-Factor in the MVP Debate: How Do We Measure Defense?

Share All sharing options for: The X-Factor in the MVP Debate: How Do We Measure Defense? 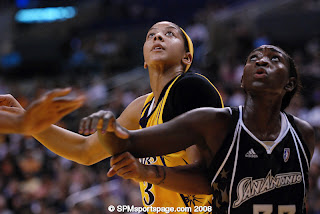 As the WNBA’s regular season draws to a close, the MVP is heating up and there are a number of worthy candidates which makes the discussion both difficult and exciting.

But usually the MVP discussion occurs without regard for defense. Usually people compare basic stats like points, rebounds, and assists or occasionally more subjective assessments like clutch play or relative ability to carry a team. In the previous MVP rankings posted here, I used plus/minus as something of a catch-all statistic for net impact, but that is by no means a strong indicator of defense.

Conceptually the argument for taking defense into account is simple – the game is played at both ends of the floor and theoretically the most valuable player would be able to contribute to offensive and defensive production. An argument could be made that the MVP is purely an offensive award, but for the sake of argument let’s a assume that good defenders are of more value to a team that poor defenders.

But the reason defense rarely enters into these conversations should be obvious – it’s difficult to impossible to make reasonable defensive comparisons between players. It’s difficult to parse out the influence of team defensive strategy from the measurable aspects of defense and it would require hours of game to make a valid comparison of defensive intangibles.

Nevertheless, just to make the MVP arguments a little more interesting, I’ll revisit the defensive player of year rankings with a change that might make it easier to judge a player’s individual defensive contribution. One problem is that not all defensive statistics are created equal. So to address that, I’ll borrow the weights for blocks, rebounds, steals, and personal fouls used in David Sparks’ metric for overall NBA productivity while also taking into account plus/minus numbers and the strength of a player’s team.

By looking at individual box score stats, team stats, and on/off court stats, I hope to arrive at a better way to account for defense during MVP discussions and evaluate candidates for the Defensive Player of the Year award.

The advantage of percentage statistics, so I thought, was that they look at the percentage of plays on which a player makes a defensive contribution, which helps to adjust for minutes played (though not pace).

The problem with that system is that it assumes blocks, defensive rebounds, and steals are equal and thus valued equally when combined to evaluate versatility. So how do we take into account the actual value of these statistics?

David Sparks created the Model Estimated Value (MEV) statistic as an effort to measure overall productivity of players (you can read more on that here). In the process, he looked at the contribution of box score statistics to team scoring margin and came up with a list of weights for every statistics – including blocks, defensive rebounds, steals, and personal fouls.

Here are the weights that Sparks came up with:

While some have critiqued MEV for not taking defense into account, I’m going to borrow those weights in order to come up with measure an individual player’s defensive contribution to victory. Of course, these numbers were created in relation to the entirety of a player’s box score statistics, so these numbers are probably at least a little inaccurate...not to mention that they are based on NBA numbers.

So for the sake of this analysis, I’ll call this number "estimated defensive value". The formula is as follows:

And since I am comparing players who have played different minutes on different teams, I adjusted it to make it a metric to measure production per 40 minutes.

So I took three statistics – defensive plus/minus, defensive value, defensive contribution (which is an approximation of the player’s contribution to their team’s defensive dynamics rating) and ranked 15 of the top MVP candidates in each category. There will be some worthy candidates missing of course, but I’m sure someone will let me know if there’s a missing player.

As a reminder, here’s how defensive contribution is calculated as described previously:

The goal is to get a (very) rough estimate of the player’s contribution to their team’s defensive success per minute.

First, I took the percentage of team minutes that each player played. Second, I (and Excel) looked at their team’s defensive rating and figured out how many points above average it was – a below average team got negative points to help create a hierarchy of contributions. So then I (er, Excel) multiplied the percentage of team minutes by the points above/below average to get a player’s contribution to their team’s defensive rating. It’s not perfect – certain players are playing big minutes because of their offensive prowess. However, combined with defensive plus/minus, you get a sense of how much they played and how effective they were doing it.

The only difference is that now I’m using the defensive dynamics rating I use to calculate defense, which is loosely based on Dean Oliver’s four factors.

The results are interesting and I think strengthen the arguments for a few of the MVP candidates…particularly one who continues to be overlooked in the popular debate. Here are the 15 players I started with:

I ranked each player 1-15 and with the top player in each category getting 15 points and the lowest getting 1 point. The following are the top five in each designated defensive category:

**The raw numbers were acquired from Dougstats.com and the plus/minus numbers are from the Lynx Net Plus/Minus and statistics page.

And here are the totals – the top 5 defensive players among the most talked about MVP candidates:

By no means are these numbers definitive, but it adds to the argument for two of the top 5 candidates from my last MVP rankings – Sophia Young and Candace Parker. Young was ahead in the last rankings, tied with Taurasi, so you could also argue that Young deserves the MVP more than Taurasi based on defensive impact.

It does seem biased toward big players, but really, that’s not surprising – given that basketball is a game where the goal is 10 feet high, bigger players should be more effective at defending the basket.

Conclusion: How much of a factor should defense be in the MVP award?

I’ll allow others to make claims about what this actually means for the MVP race, but I think it sheds some light on a few things, though I’m left with a few questions.

First, how can we balance defensive and offensive production when considering MVP candidates? Should a poor defender be eliminated from consideration as we often subconsciously eliminate poor offensive players?

Second, since most people start with offensive statistics to choose MVP candidates, is there a strong defensive player that we’re ignoring?

Third, how do we take into account the difference between positions among defensive players when considering defense as a factor.

And fourth, do these rankings pass the "laugh test"? For example, do we really buy the idea that Bird is a better defensive player than Whalen? Whalen has a higher defensive value while Bird is last among MVP candidates. Conversely, Bird has a much better on/off plus/minus while Whalen has a -5.2.

And ultimately, the latter question is the problem with trying to assess defense statistically -- it's even harder to capture defensive intangibles. But it's worth a try if we want to make even stronger MVP arguments.

A note on Sue Bird: There’s been plenty of talk about Sue Bird as an MVP candidate recently due to her performance with Jackson out. And as you might already know, I’m a fan of Bird’s game. So what might considering defense do for her?

If she’s the top defensive guard among the popular candidates, then perhaps it makes the argument that she deserves consideration. However, I still think it’s difficult to make an argument for Bird over Parker, Young or even Augustus and Whalen – all have done a lot for their teams and one could argue Augustus and Whalen have done more for their teams over the course of the entire season.

Lisa Leslie as DPOY? The numbers still point to Leslie as the Defensive Player of the Year and observation always seems to support that. She's a huge presence in the post and really anchors the Sparks' defense on most nights.