Why the Sparks’ Performance is Finally Meeting Pre-Season Expectations

Share All sharing options for: Why the Sparks’ Performance is Finally Meeting Pre-Season Expectations 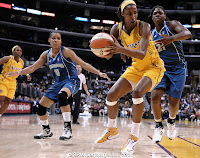 With their 82-58 victory over the Lynx last night, the LA Sparks have won three straight games against teams with a collective win percentage of .576 and have tied a season-high with four straight wins.

And so I think it’s safe to assume that the team we’re seeing now is what most of us expected from the Sparks at the beginning of the season: a dominant team that seemed destined to win it all. They’re starting to look so invincible that it’s tempting to dismiss their 12 losses as the result of temporary lapses rather than indicative of some permanent deficiency.

And by the time the playoffs come around, the questions about whether their point guards are good enough or whether coach Michael Cooper is employing the right strategy might even be rendered trivial by the fact that this team has demonstrated that they can function as a cohesive whole that’s greater than the sum of its parts.

So what happened? Are they doing something differently than what they were doing before?

As it turns out, I would argue that the Sparks are not really doing anything "different" at all. They’re just finally doing the things they’re good at more consistently – rebounding and playing defense.

The Sparks have been one of the top rebounding and defensive teams all season. But the Sparks renewed focus on playing to their strengths mostly entails a focus on the fundamentals – boxing out on defense, taking some creative risks on offense, and using their height to stifle their opponents with help defense.

I think of it this way – there are five players on the court at a time. The Lynx were trying to double and triple team Lisa Leslie, which worked for a while. That leaves only 2 or 3 players in position to box out Candace Parker and DeLisha Milton-Jones. That means either teams are going to get punished by Parker on the boards or leave Milton-Jones with easy opportunities because teams will focus so much on Leslie and Parker. There’s not really a way to stop them from dominating the rebound story.

Statistically, their offensive rebounding is the thing that stands out as the reason why they beat the Lynx -- while they had an offensive rebounding percentage of 35.94% for the game, they were grabbed 57 and 55 percent of the available offensive rebounds in the second and third quarters respectively when they mounted their run. Anything over 50% should absolutely be considered dominant.

But that’s been a reality of playing the Sparks all season. What they’re doing differently now is deliberately putting pressure on the defense a little bit more. Rather than focusing on pushing the ball and scoring quickly, they’re focusing on setting up their offense and running one of two post plays.

When they get into a rhythm with their post offense, no matter what the defense does one of three things is bound to happen – a post move for a score, a pass to the cutter for a score, or a missed shot with a cutter running unchecked to get the offensive rebound. A perfect example of what has been working well occurred in the third quarter in the middle of a dominant 23-3 run that essentially in which they absolutely dominated the offensive boards.

With about 1:30 left in the third quarter, Temeka Johnson brought the ball up the court with Jessica Moore on the left wing. Johnson passed to Moore who patiently waited for Parker to establish position on the left block. Parker received the ball, passed the ball over the defense to a cutting Leslie who hit the layup and got the foul. The second half was like a series of variations of that play.

There are very few teams that can defend those post sets one-on-one and if they try to double team, someone is inevitably left open for the offensive rebound. And again, it’s not that they weren’t doing this before, but it’s that they look much more comfortable doing now and are looking to deliberately set up these plays much more often during games.

The other benefit of having a frontline that boasts Lisa Leslie, DeLisha Milton-Jones, and an ever-improving Candace Parker is that it’s an extremely difficult defense to score on. And when a team starts playing good defense – especially when that includes 8 blocks from Lisa Leslie – it’s much easier to establish an uptempo game and keep the defense on their heels.

Since the Olympic break, it seems like the Sparks have embraced defense, as coach Michael Cooper noted after their victory against San Antonio:

"Defense wins games, and though we did not have a great offensive game, we brought it in at the end and capitalized on the win," Sparks head coach Michael Cooper said. "[The players] believe in our defense now, and that’s half the battle. If they believe in it they will continue to do it and commit to it."

But you don’t have to take Cooper’s word for it -- just look at what they’ve done to Sophia Young in their last two meetings against the Silver Stars.

Young is clearly one of the leading candidates for the Most Valuable Player award, but the Sparks have managed to completely neutralize her in their two wins against the Silver Stars. In those two games Young was 2-16 shooting, which completely took away a player the Silver Stars are dependent upon for success – Young averages 52.6% from the field in wins and 39.6% from the field in losses.

By the fourth quarter of their two wins against the Silver Stars, Young looked extremely frustrated – she was missing layups in traffic that she would normally make and forcing shots she normally wouldn’t take. And the reason is that on almost every play – or every other play – the Sparks had a different defender or set of defenders guarding her. They completely took away her ability to establish a rhythm with their combination of on ball defense, double teaming, and help defense.

However, their defense has not been stifling at all times. One of their biggest weaknesses has been their perimeter defense. That’s why both the New York Liberty and Phoenix Mercury have beaten them twice – big performances from Leilani Mitchell, Shameeka Christon, Diana Taurasi, and Cappie Pondexter have given the Sparks trouble. They haven’t had a good answer for perimeter-oriented teams.

The fact is that the Sparks’ point guard trio is going to over-matched against any team they play – both Shannon Bobbitt and Temeka Johnson are small guards and Keisha Brown is a step slower than either. Even when they play good position defense their size deficiencies put them at a disadvantage against players like Augustus or Wiggins.

So early in the season it seemed to me like a zone defense would be the optimal strategy for this team. After Augustus and Wiggins gave them fits in their first two meetings (Wiggins was out for the second meeting), last night the Sparks held them to a combined 7-21 with three turnovers each. The difference seems to be the intensity of their help defense.

Almost every shot Augustus and Wiggins got was contested. In the second half when the Sparks really pulled away, Augustus was 1 for 8 from the field with two turnovers. She was trying to shoulder the entire scoring burden, being turned away by the Sparks defense, and getting little help from her teammates. In the fourth quarter, the Sparks held the Lynx to a field goal percentage of 13.33%...and a paltry synergy score of 27.

By taking Augustus out of the game, the Sparks made it very difficult for the Lynx to win. Similar to Young’s value to the Silver Stars, Augustus is shooting 51.3% in wins and 41.7% in losses.

Are the Sparks the favorites to win the West once again?

The Sparks are certainly not invincible – their perimeter defense and their tendency to turn the ball over on offense is a glaring weakness. But in recent games, it appears that instead of trying to hide their weaknesses, they’ve forced opponents to respond to their strengths and that makes them very difficult to beat. None of this should be considered "new" strategy – it seems like they’ve just focused on the best of the strategy they’ve used all season long.

But when the Sparks are playing like this, who in the Western Conference is going to knock them off if they play to their strengths?

The best two perimeter teams in the Western Conference are Minnesota and Phoenix and it’s likely that neither of them will make the playoffs. The Storm are good, but with Lauren Jackson out for the playoffs, it’s hard to see how they would match up against the Sparks. And we’ve seen how the Monarchs and Silver Stars match up with them.

Instead of trying to fit the "Showtime" style that people tried to compare them to at the beginning of the season, the Sparks have finally found their own identity that almost seems antithetical to the predominant notions of what "LA basketball" is about. It’s a grittier, "blue collar" style of basketball that starts with defense and rebounding. And it might be good enough to bring a WNBA championship back to L.A.

Seimone Augustus deserves some MVP votes: When I did my last MVP rankings before the break, Augustus came in 5th, right behind Lauren Jackson who will probably be less of a candidate after missing so many games. She's as important to her team as any player in the league and if they do manage to make the playoffs, she deserves serious consideration.