What Does the Future Hold For the Sky?

Share All sharing options for: What Does the Future Hold For the Sky? 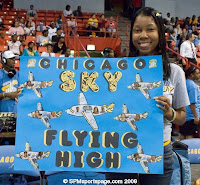 The Sky entered last night's game against the Liberty with not much to play for beyond pride and perhaps the opportunity to build some confidence for the future.

Unfortunately, they ran into an inspired Liberty team who wanted to build some momentum for the playoffs, even without injured players Janel McCarville and Tiffany Jackson. Sure they already knew that they'd be facing the Connecticut Sun in the first round of the playoffs, but no team wants to "stumble into" the playoffs. From Pay Coyle in the AP article:

"That was playoff-atmosphere basketball," Coyle said. "We want to get rolling and I thought that was a good start."

But this has to be a disappointing loss for the Sky.

The Sky had already beaten the Liberty once since the Olympic break. One would think Candice Dupree and Sylvia Fowles would have a strong game against the depleted front court of the Liberty. And although the game doesn't mean very much for the playoffs, it was an opportunity to win a series against a playoff team, which could be a nice confidence boost for next season.

But unfortunately, things fell apart during a 14-2 run at the end of the third quarter when the Liberty took control of the game. And unlike their 4th quarter collapse against the Storm, it wasn't the bench that let the game slip away. It was mostly starters. So what, if anything, does this say about the Sky for next season?

Still having problems in the half court

The momentum in the game shifted with about four minutes left in the third once the Liberty switched to zone and Shameeka Christon and Leilani Mitchell started wreaking havoc on the perimeter causing three straight turnovers.

But the primary reason for the shift was something that has been a problem for the Sky all season -- they have these dry spells, as the commentators said coach Steven Key describes them. But this wasn't just one of their dry shooting spells...the Sky just seemed to stop moving. And when you stop moving against a zone, it becomes much easier to defend because one defender is able to guard 2 players in an area without moving. The result is frustration and then confusion.

Some of the stagnation comes when Fowles is playing on the high post. She doesn't yet look comfortable making decisions in their offense and it just results in turnovers. One of the turnovers came on an attempt to make an entry pass to Fowles that Fowles just didn't step to.

But the main reason is that when the Sky face a zone and cannot get penetration from their guards, it becomes obvious that they don't yet have a well-defined post offense despite having one of the best young post combinations in the league. So rather than moving the ball and trying to find spaces in the zone to get the ball to their post players, they end up holding the ball around the perimeter and making predictable passes. The Sky somehow need to find an identity beyond the perimeter.

The Sky's brief spurt in the fourth quarter with about 3:30 left starting with Armintie Price's drive and missed free throw which was rebounded by Jia Perkins exemplified their strength this season. They are at their best when they get into that dribble drive set, get players moving toward the basket, and score in transition.

The problem is that when they get so focused on the perimeter game, their dynamic duo in the post becomes an afterthought...almost glorified rebounders rather than offensive threats. And yet we know what Dupree and Fowles can do -- Fowles has shown flashes of brilliance throughout the season and Dupree has been an all-star. Right now, their strengths just don't appear to be well integrated into their offense.

When a post player disappears as Fowles did in the fourth quarter, it's not really her fault. Sometimes, it's a matter of just not getting the ball. Fowles hardly touched the ball in scoring position at all in the fourth quarter. Ditto for Dupree. And it seems to be something they've struggled with all season -- finding a way to consistently feed the post rather than just waiting for post players to get loose balls or offensive rebounds.

All the pieces are there, it's just a matter of putting it all together

You have to figure that in the off-season, the Sky will put in more post plays and perhaps retool the roster to find players who can distribute the ball to post players more effectively. But with a lottery pick and a talented roster that has four threats offensively and some decent defensive players in Perkins and Fowles, they don't need to change a whole lot. They just need time to bring it all together.

Some Sky fans are calling for Steven Key to be fired, but that might be unfair after one season with a young team. It takes time to put Fowles' injury and absence during the Olympic break have to be taken into account when evaluating the Sky's season.

I still believe the Sky have a bright future. There are plenty of examples in sports where extremely talented young teams take a few years to put it all together...and some never do before making major changes. But this team has at least four positions in their starting lineup pretty well set and just needs to add to the bench so they can give the starters a rest.

And once they fill out their roster, they can become much more dangerous. Missing the playoffs just gives them a chance to add more talent through the draft lottery and focus on their growth for the future. And perhaps it will make them more hungry for next year.

The Chicago Sky: My Choice for Team of the Future
http://rethinkbball.blogspot.com/2008/06/chicago-sky-my-choice-for-team-of.html