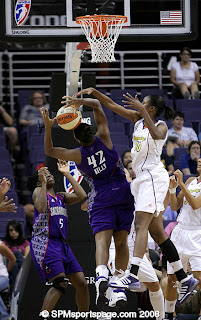 First, I have to get this out of the way – if you don’t think Diana Taurasi deserves MVP consideration, try watching last night’s game against Sacramento.

Yeah, I could just give you the amazing stat line that’s become somewhat routine for her, but you have to watch her play and take over games to truly understand how much she means to her team. She does everything – she scores, she sets up teammates, she rebounds, and she anchors the Rover defense, although it has been somewhat inconsistent this season.

But Taurasi’s performance aside, what really struck me as impressive was the Mercury’s defense. It’s hard to pinpoint one play because really it lasted throughout the entire game. But what I noticed was that they were playing much more physically than they normally do.

In many Mercury games this season, their opponents have essentially had a layup line to the basket. But when the Mercury turn up the pressure on the perimeter they can frustrate their opponents.

What was different about last night is that they turned up the pressure on the interior – even if they fouled a lot, they set a tone that made it extremely difficult for Sacramento to establish anything consistent in the paint. And as a high scoring team, that’s all they need to keep a game under their control.

The play of LaToya Pringle was particularly impressive – she’s able to do many of the things Tangela Smith does, including running the floor. And on defense, Pringle is so active that if she's not actually blocking shots, she's disrupting the offense.

I also find it interesting that they’ve won two straight now with Barbara Farris in the lineup in place of Le’coe Willingham. The main thing Farris seems to add is a bit more of a defensive presence.

Even if the Mercury don’t manage to achieve the unlikely feat of making the playoffs, their play over the last two games has been impressive. They’re winning games with balance rather than being all Taurasi and Pondexter on offense.