My Choice for MVP: Diana Taurasi

Share All sharing options for: My Choice for MVP: Diana Taurasi 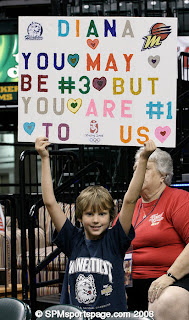 So this MVP question has been looming for weeks and I think my favorite candidate has been clear for some time: Diana Taurasi.

Although the Mercury did not make the playoffs, missed making .500, and were not one of the top 8 teams in the league, I think a convincing argument can be made for Taurasi, with both statistics and observation.

As a refresher, here's my criteria for the MVP in the form of questions:

1. Can the player be relied upon to have a positive influence on the game when they’re on the floor?
2. Can they create their own offense when the team needs it?
3. Do they use possessions effectively?
4. Can they be used multiple ways on the floor to adjust to match ups?
5. To what extent do they help their team win games?

As a twist, I only evaluated my selections for the All-WNBA team...and the ever-popular Becky Hammon. The outcome was similar in the top 3, but Taurasi pulled away from Young in this one. Let's see why.

First, a change to the process

I also changed the "Boxscore differential" piece after a brief email exchange with David Sparks. He came up with a new way to calculate player contributions to team success called Marginal Victories Produced. The formula is as follows:

What you get in that equation is the percentage of point production that can be attributed to an individual player. Is it skewed to base production only on points? Yes and no. Yes because obviously there's other things an offense does. But no because, hey -- points win games AND it takes defense into account by incorporating opponent total points. So it says something about how much a player's contributions contributed to actual production.

Anyway, on to the numbers.

I do think defense is important to consider for the MVP and I suggested a way to evaluate defense statistically the other week. But the problem is a player's defensive value is so difficult to quantify even with a number of statistics.

In the Mercury-Shock game on ESPN the other day, they were talking about Katie Smith's defense so I watched her the whole game. She does an amazing job defensively just because she's so strong. But it doesn't show up in the stats at all. And there are countless other players like that.

So given the difficulty of coming up with a way to assess defense and the fact that I'm already using plus/minus and MVP as proxies for overall contribution, I'll forgo the use of independent defensive stats for now.


A narrative defense for MVDee

Statistically, what we see is that Taurasi has the ability to win games for her team (MVP), heavily relied upon to produce with the ball in her hands (usage), is extremely versatile, and does all of that efficiently (pts/zero pt. poss.). That she does all of that with another Olympian on the team is even more impressive.

Then there's just the fact that Taurasi is flat out spectacular at times. She fills the stat sheet. She makes big plays. She makes you say, "Wow." As for the fact that the team did not win much, we have to remember that the team was built with Taurasi, Cappie Pondexter, and Penny Taylor in mind. With Taylor out all season and then Tangela Smith out down the stretch, you could say that the reason they missed the playoffs is that they were missing 2 key contributors. That should not influence our assessment of Taurasi's performance -- she still carried that team and had them in the playoff race until the last week of the season. That alone is impressive.

In comparison, Parker is more versatile but less efficient and less relied upon by her team. It's not a bad thing, but for me it's sufficient reason to go for Taurasi instead of Parker, despite the Sparks' better team performance.

However, there is (at least) one problem with these metrics. As I've said before, most of these statistics are not favorable for point guards and those that do favor point guards disadvantage everyone else. So Bird came in last and Whalen came in 8th. Most people would have them higher on their MVP lists.

Here's my way of rationalizing it -- in Bird's case, I would say that while she's been great all season, she didn't really turn it on until Jackson left. In fact, she was in a horrible shooting slump for the first third of the season. The award is given for a season's worth of work, so I think there are just stronger candidates this year.

As for Whalen, I think she is truly disadvantaged by this system because she's a player who focuses on running the system rather than collecting big stats. But she also plays with Jones who is a very strong MVP candidate as well. What surprises me though is Whalen's low plus/minus rating -- +2.8 -- compared to Jones' -- +10.4. Since plus/minus is the strongest non-box score stat we have for the WNBA, it's important and it's a little surprising she doesn't rank higher. It was also somewhat interesting to see the Sun win two games without Whalen...that certainly hurt her MVP chances.

Because we can't watch all of the games, I stand by the notion that statistics are helpful in evaluating MVP candidates, despite a few quirks. With or without statistics, Taurasi would be my pick this year. Hopefully next year she'll give us a repeat performance and take the award without any caveats...if not for that perky Parker...