"Forever Opti-Mystic": When Will the Mystics Rise Above Mediocrity?

Share All sharing options for: "Forever Opti-Mystic": When Will the Mystics Rise Above Mediocrity? 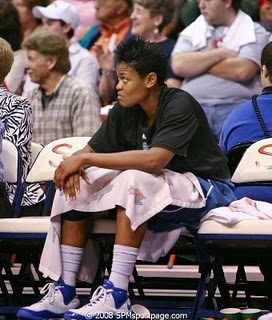 Like I wrote about the Sky yesterday, the Mystics didn't have much to play for against the Sun except pride.

And like the Sky, they lost to a playoff team that was missing two MVP caliber starters. In other words, the Mystics lost to the Sun's bench as the Basketcases pointed out. That's not exactly an encouraging way to head into the last game of the season for a lottery-bound team.

Which begs the question: how far away is this team for success?

One of the commentators during yesterday's game mentioned a poster a fan made that read "Forever Opti-Mystic". Which I find impressive...because I haven't been.

I have a secret -- when the WNBA first started I lived in the DC area and the Mystics were my team. Or rather, Nikki McCray was my favorite women's basketball player. I liked everything about her -- her game, her off-court personality, and at the time I thought she'd be a star. Then when they got Holdsclaw I thought it was a done deal -- the Mystics were destined for a championship.

Of course, as the Mystics only continued to wallow in mediocrity, not only did my interest in the team fade, but my interest in the entire league faded. Everything just seemed, well, predictable and by extension, boring. The Comets seemed destined to win every year and the Mystics couldn't even win with Holdsclaw and McCray. And when the Mystics traded McCray what little interest was left disappeared entirely (I can't even remember what year that was without looking, but I remember rolling my eyes when it happened).

I was crushed. And it took me years to even bother watching the WNBA again ("Expect Great" actually worked on me. I realized I had to let go of the mediocrity I experienced in DC). I write all this to say that from my perspective as a born-again WNBA fan, it seems like the only constants in the league's history have been Tina Thompson and the Washington Mystics (I could be wrong about that and I'm sure someone will correct me).

So watching yesterday loss to the Sun was a painful reminder of a frustrating past -- how does this team finally get over the hump? After reading a Rebkell thread about it, I have to say I agree with most of the posters there: trade Beard.

All signs point to change

I said before Welcome Back Week that I thought the end of the season for the Mystics would be interesting to watch. It was a(nother) key turning point for the franchise after trading Taj McWilliams-Franklin for Tasha Humphrey while in the middle of a playoff race.

Well, all they've done after the break is go 0 for 7. Not particularly encouraging. And when I see comments like the following from Alana Beard, you have to wonder if their star longs for greener pastures:

"[The Sun] have a great coaching staff," Mystics' guard Alana Beard said. "They get the most out of their players. They have a good bench, too. The players accept and play their roles."

One Mystics fan, CC, has sent me a few emails regarding whether the Mystics should trade Beard and although I think they could build around her, it seems tempting to just move her and continue cleaning house. CC wrote the following via email:

As the fate of DC is unknown, and with so many other factors involved, I both hope she is traded to a more successful team and will return to her 2006 level. Yes,I agree trade of first Melvin, then Milton-Jones' and Teasley's loss were intrinsic to DC performance this year,also.

CC echoes the sentiment of many on Rebkell who have also suggested trading Beard and cleaning house. As long as the team is going to struggle, they might as well bring in some new blood to energize fans.

So what direction should they move in?

I'm honestly at a loss on this one because really, they're not yet close enough to any standard of success to suggest one direction. The key is that everyone from the owner down to the 12th player on the bench needs to commit to a direction, something like Connecticut has done.

The fact that Connecticut beat the Mystics with their bench playing major minutes speaks volumes about Connecticut's team building strategy. They have built a system that functions even without their stars. Nobody expected them to be at the top of the Eastern Conference this year, but there they are with home court advantage.

That seems like a good way for the Mystics to start to me -- establish a system, find players who fit the system, and build slowly toward a cohesive unit. It might not result in instant success, but at least fans might feel like the team is building toward something rather than floating around in the abyss of mediocrity. And perhaps that will help the fair weather male fans like me stick around for a little bit longer.