Does Depth Really Matter For the Playoffs?

Share All sharing options for: Does Depth Really Matter For the Playoffs? 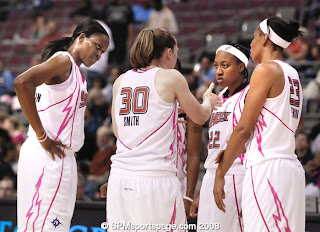 I saw an interesting article from last week about how Plennette Pierson's return gives the Shock depth and versatility as they head to the playoffs.

But while the main theme of the article is the importance of depth, it's also clear that versatility and balance count. From the article:

Rather than drafting and signing players merely for depth’s sake, Laimbeer, assistant coach Rick Mahorn and director of player personnel Cheryl Reeve identified backups that would http://www.blogger.com/img/gl.link.gifcomplement the starters’ strengths. They also found a bona fide backup for each starter, a departure from previous seasons when subs like Pierson and Johnson covered multiple positions.

Although it seems that people generally assume that depth is a good thing, this example from Detroit tells us that depth might not be as important as having a balanced and versatile rotation.

Conversely, the Storm have succeeded during the end of the season despite lacking depth...and health. In fact, they've been almost entirely reliant on Sue Bird during the second half of the season. Their lack of depth was on full display in Sunday's match-up of benches against the Sparks as both teams rested their starters. And certainly the Sparks are no model of depth, not to mention balance.

But without depth, the Storm have remained successful by focusing on the little things like defense and rebounding, according to Sue Bird.

"The reason we've been able to play so well is the system that we have," Bird said. "We rely almost entirely on our defense. No matter who's in the game, you can always play tough defense; you can always control the boards. That's really what keeps us in games and allows us to have opportunities to win."

So as teams head into the playoffs, how important is depth? And is there a way to concretely understand the value of depth as we look at the eight playoff teams' chances at success?

David Sparks from the Arbitrarian column at Hardwood Paroxysm has already explored this question for NBA teams and came up with an interesting result -- statistically, there's a negative relationship between depth and team success. Huh? How does that work?

Well he sent me the numbers for the WNBA today and I think once we actually understand how he's defining depth and look at which teams are considered deep, it starts to make sense. And perhaps starts to illuminate why certain teams succeed despite lacking depth.

Depth and rotation are not necessarily the same. Since there must be five players on the court per team at all times, the theoretical minimum for rotation size is five, which you would see if a team played only five players, all game, every game. However, depth concerns not playing time, but production, and it is easy to imagine one of those five players contributing more than 20% of the team's total production, while one or more of the others produces less than their share. (There is a metric, called the Valuable Contributions Ratio, which I use to measure players' productive contributions relative to their floor time.)

If each player produced in proportion to their allocation of minutes, it would make no difference which players were on the floor, but obviously this is not the case. Rather, better players produce a greater proportion of their team's production than their proportion of a team's minutes played. This implies, of course, that a team's rotation size will likely not be the same as its productive depth, and further, that depth will likely be smaller than rotation.

I think this is an important distinction because at least in the NBA conventional wisdom is that teams should shorten their rotations for the playoffs. So if we believe that the small rotation strategy works, then perhaps the key is having a "deep rotation" -- a rotation with as many productive players as possible, independent of how long it is.

Both rotation and depth size are measured by concentration of minutes/production or how well minutes or production are distributed among players (described in depth here). Here's Sparks' NBA example:

In the first game, Indiana played only six players in total. Of those six players, five played more than 40 minutes, and the sixth played 15. The Herfindahl Index of concentration for this game is a very high 0.18.

In the second game, 12 players saw 12 or more minutes, with the most playing time being 23 minutes, which is less than half of a game. As you might expect, the Herfindahl Index is much lower here (the index increases with concentration), just 0.09.

The third game sees Minnesota employ 14 players in their quest to defeat Houston. Based on this alone, you might expect even less concentration than in the Sacramento game. However, the distribution of minutes here is much less uniform than above. Seven players saw over 20 minutes of action, the other seven saw less then ten minutes, and four of these had almost negligible floor time. As a result the Herfindahl Index is somewhere between the two games above, at 0.12.

Let's look at the numbers.


The first thing I notice is that the statistical depth of a team does not seem to have much bearing on a team's success. Of the five teams with the least statistical depth, three are playoff teams (Los Angeles, San Antonio, and Indiana). The team with the most depth was the expansion Atlanta Dream.

So what if anything can we conclude from this?

When looking at the Sparks and Silver Stars -- both of which have little depth -- you could conclude that it's superstars that matter more than depth, balance, and all the other stuff. But then you look at teams like Detroit and Seattle with average depth (when healthy) and an average rotation and conclude that balance is the key.

As it turns out, the top three teams in the West would seem to support the superstar theory -- none of them is heading into the playoffs with a lot of depth, once you take Seattle's injuries into account. Will that hurt when they face the East with more depth? If San Antonio's regular season success is any indication, depth is not the problem -- having a balanced set of stars might just be more important.

And for the Sparks? They might prove the same theory if they fall short of a championship -- stars without balance are not very effective.

I don't have the time for it now, but perhaps it would be fruitful to take a look at the interaction of depth and SPI playing styles to see if certain combinations within a rotation are more valuable than just having depth for depth's sake.

Anyway, it will be exciting to see how this plays out in the playoffs.

Another way to look at depth is by Boxscores -- Sparks sent me the updated Boxscores graphic for the season as well. Take a look at the Sparks -- 3 players consume most of the production. That production equals the production of exactly 5 Liberty players and almost five Detroit players if you can visualize the image without Cheryl Ford. 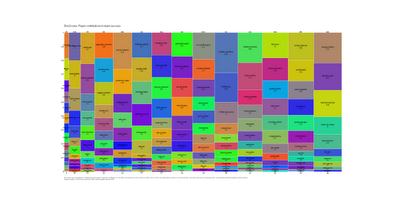