Atlanta "Grows Up" In Upset Over Sparks

Share All sharing options for: Atlanta "Grows Up" In Upset Over Sparks 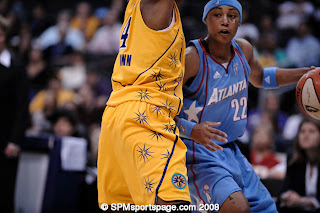 Perimeter defense has been a problem for the Sparks all season and it absolutely haunted them in a 83-72 loss last night against the Dream.

The Sparks commentators talked a lot about the lack of offense from the Sparks' guards, but it wasn't just a case of the Sparks playing a bad game. The Dream had an outstanding game plan and executed well.

"We grew up a lot tonight," Atlanta coach Marynell Meadors said. "L.A. by far has the best talent of anybody in the league. But our team controlled the tempo, especially in the last part of the third quarter and in the fourth quarter. I thought that was the difference."

I haven't watched a full Dream game in a while, but this was the first time I've really seen the Dream play a game so well together.

The scoring of Iziane Castro-Marquez from the perimeter and Betty Lennox in transition was difficult for the Sparks to stop. Ivory Latta played more like a pure distributor than a scoring guard, with a pure point rating of 13.56. The Dream's defensive game plan of staggered traps and forcing the Sparks' guards to beat them. And the Dream's guard play combined with the Sparks' turnover problems was too much for the Sparks to overcome.

But what's most impressive is that they were able to close out the game in the 4th quarter with the game on the line. And for an expansion team that's impressive.

With 6:53 left in the 4th quarter, Candace Parker stepped to the free throw line with the game tied at 63-63. After that point, the Dream went on a 20-9 run to close the game. So what happened? Well, it seems as though the Dream kept the pressure on and the Sparks just fell apart.

What seemed to occur is that the Sparks panicked down the stretch. Whereas they should have stuck to the formula that's worked all season for them -- post play -- they reverted to a lot of one-on-one play. As the Sparks color commentator said, they weren't cutting as hard, weren't making the crisp passes they normally make to win, and didn't have the defensive intensity that helps them beat perimeter oriented teams.

So is this a fluke loss or indicative of a permanent weakness?

This loss actually fits a pattern in Sparks losses: high turnover percentage and poor perimeter defense. It's why they lost to the Dream last night, the Mercury and Liberty twice, and had two tough matches against the Lynx. They just don't do well against perimeter oriented teams.

If you think about it, the Dream have a very similar player style profile as the Lynx when Castro-Marquez plays the way she did last night: two strong perimeter scorers, a third guard who can run the offense, and a crew of post players who aren't dominant, but get the job done.

BUT, none of those perimeter teams they've really struggled against are even in the Western Conference playoffs. And the Sparks have proven that they can beat the Silver Stars, Storm, and Monarchs. In other words, the Sparks could go on to represent the West in the Finals even with a huge weakness. It won't be easy and it's obviously going to be treading on thin ice with the WNBA's best-of-three playoff format where one bad game can mean the end of an entire playoff run.

If the Sparks can remain focused during the playoffs, they are still a dangerous team because not many other Western Conference teams can beat them the way the Dream, Liberty, Lynx, or Mercury have. Just one more reason to be excited about the WNBA playoffs.

Asleep in Atlanta: As reported by the Pleasant Dreams blog, there was no coverage of this game in the Atlanta Journal Constitution beyond the AP story. How can a league grow when the media doesn't bother to make mention of the team's milestones?

San Antonio experiments with web casting: Last night the San Antonio Silver Stars webcasted a game without the help of local TV. They took the center court feed and the radio feed and made it work. Was it perfect? Not really -- the picture was slightly distorted. But it allowed fans to see an exciting game featuring two of the best teams in the league. Hopefully other teams will follow suit and make sure that fans are able to watch more games live.

Why the Sparks’ Performance is Finally Meeting Pre-Season Expectations
http://rethinkbball.blogspot.com/2008/09/why-sparks-performance-is-finally.html