Share All sharing options for: All-Rookie Teams: Where Does Sylvia Fowles Fit? 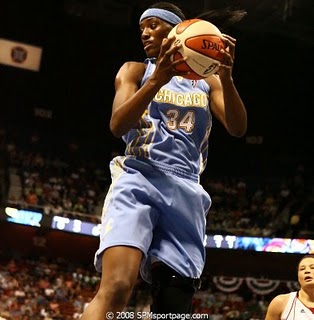 Although the MVP race has generated a lot of debate, the Rookie of the Year race was pretty much decided after Candace Parker’s first game of the season.

In fact, I’d say that at least the top 3 rookies – Parker, Candice Wiggins, and Sylvia Fowles (despite injury) – have been obvious to most people for some time. In the world of my opinion, there’s a second tier of equally obvious candidates: Nicky Anosike, Tasha Humphrey, Crystal Kelly and Leilani Mitchell.

In other words, although the top of the order is pretty well decided, there’s very little room at the bottom which should make for some tough decisions for voting members.

But the real drama in rookie award giving this year is whether Sylvia Fowles has done enough to earn a spot on the All-Rookie team and if so, whether she deserves recognition as a member of the first team.

On talent alone, it’s clear that Fowles should make it. But given that she will have unfortunately missed half of the season, it would be perfectly reasonable to leave her off the team.

So what would I do? The statistics haven’t changed much since my last rookie rankings during the Olympic break, so here’s my opinion on who should make the rookie team…using the statistics to support my arguments.

Hornbuckle has been one of my favorite rookies this season ever since I saw her grab 14 rebounds against the Mercury early on. She’s not the flashiest player, but she’s gritty, plays excellent defense, and has the tools to be an excellent offensive player.

Statistically, her greatest asset – defensive anticipation – has led her to second place in the WNBA in steals per game, which is an impressive feat for a rookie. Offensively, she has a lot of skills, but isn’t exceptional in any one area. But one thing worth pointing out is that she’s fifth among rookies in assist ratio, which underscores an important point about Hornbuckle – she’s a great team player and will be an excellent piece for the Shook as they try to take back the WNBA title.

The question I have to ask about Holt is whether she’d be a candidate for the All-Rookie team if she was playing for another team. But this pick is as much about potential as it is production for this year.

Statistically, the thing that stands out about Holt is that she has not had a great shooting season. Her true shooting percentage of 49% ranks her 13th among rookies and her VCR ranks 14th among rookies, although it is above league average. But what I find interesting about Holt is that she has all the instincts to be a great offensive player eventually.

She usually gets to where she wants on the court and is able to create shots for herself even though she has yet to become a consistent scorer. But most impressive about her statistically, especially in comparison to Hornbuckle, is that she generally makes good decisions with the ball – she is among the rookie leaders in assist ratio and turnover rate.

In other words, aside from her streaky shooting, she doesn’t waste a lot of possessions. And as an aside, that makes her one of the few shooting guards in the league who has a positive pure point rating, which is a testament to her future versatility. It will be interesting to see how she performs for the Sun in the playoffs.

Pringle is another personal favorite of mine. She’s super athletic, plays hard, and could develop into a defensive presence over time.

Statistically, she’s one of the best help defenders in the WNBA statistically and has shown the ability to score as well. She leads all rookies in offensive rebounding rate and is sixth in true shooting percentage. She’s a player that has the ability to extend possessions on offense and disrupt opponents defensively.

WNBA.com finally gave her the recognition she deserves in their most recent rookie rankings, placing her fifth on their list. I’ve thought she deserved it all season so it’s good to see her finally getting national recognition.

But the thing that makes her most impressive is probably the thing most overlooked about her game. She’s leads the WNBA in free throw per 40 minutes and free throw rate. That doesn’t seem that significant until you consider how she gets those shots. She does an extremely good job of making decisive moves to the basket and drawing contact to get herself to the free throw line. Once she refines her post moves and gets more experience in the league, she’ll be a huge offensive threat.

Statistically, she’s been one of the most efficient rookies all season. She has led rookies in true shooting percentage all season and she’s been among the top five in VCR. So why not on the first team? As efficient as she is, other rookies have been more productive. And that’s not a knock on her but a testament to the talent of this rookie class.

Obviously, that’s no reason for concern in terms of her future – we just really didn’t see her come into her own until the Olympics. Part of the problem was that she hasn’t ever really looked comfortable in the Sky’s offensive scheme, which has hurt her ability to produce effectively.

Next year when she has more time to adjust to the Sky’s system she’ll be a lot more productive and hopefully more consistently involved in the offense. So although she’s definitely one of the most talented rookies, her output this season hasn’t quite been good enough to be considered ahead of the more productive rookies this year. It’s just hard to reward someone for half a season when others have played a full season, but I see second team as a reasonable compromise.

The top two should be obvious: Candace Parker and Candice Wiggins. The other three might be debatable.

I might be a little biased here, but I think there’s a reasonable argument to be made for Mitchell to be on the All-Rookie team. The problem is that we don’t have good statistics to evaluate point guards so her numbers don’t stand out. But she’s definitely been the best point guard of any in the rookie class, one of the best backup point guards in the WNBA and already one of the best pure facilitators in the league.

Her run in July when she had 20 assists and only one turnover sealed the deal for me. She has great instincts to create scoring opportunities for others. The one question about Mitchell is whether she’ll be able to produce consistently with increased minutes or if she’s just the product of an extremely deep team with a methodical offensive system.

Regardless, it’s hard to deny Mitchell’s talent and she’s one of the better rookie stories this year after being almost cut by the Mercury.

Humphrey hasn’t been nearly as efficient with the Mystics – she’s taking more shots and missing more – but her season as a whole has been pretty amazing. With the Shock she was 3rd in true shooting percentage, a 38% three point shooter, one of the most versatile rookies, and the second most productive overall. She was able to do it all.

I haven’t seen her play with the Mystics, but something has changed drastically. Maybe she’s being relied upon more as a second option instead of the fourth option she was on the Shock. Maybe the Mystics schemes are just less well-suited to her game. But since she played most of the season with the Shock, it’s hard to deny that she deserves consideration for the All-Rookie first team.

For this season, Anosike has been extremely productive for the Lynx. Not only has she been a consistent starter, but she’s also leading the league in steals right now…as a center. That’s impressive not just for a rookie, but especially for a center.

She’s somewhat raw right now in terms of having strong post moves, but she runs the floor well and has a nose for the ball. The Lynx have put a good team together and it will be interesting to see how she and Wiggins develop over the off-season.

A quick note to critics of the statistical ranking of players:

The statistics help us evaluate and compare players, but shouldn’t necessarily determine our opinions of players. But given that we can’t possibly watch every single moment of every single player’s season (especially in the WNBA when so many games go untelevised), statistics can help us identify things that we otherwise wouldn’t notice because of unavoidable limitations. We’re all human and statistics can help us as we make judgments and try to develop informed opinions.

The Most Outstanding Rookies: How do we compare rookies…fairly?
http://rethinkbball.blogspot.com/2008/08/most-outstanding-rookies-how-do-we.html

Other posts about rookies
http://rethinkbball.blogspot.com/search/label/Rookies