WNBA MVP: The Most Irreplaceable Player & "The Superstar Teammate Principle"

Share All sharing options for: WNBA MVP: The Most Irreplaceable Player & "The Superstar Teammate Principle" 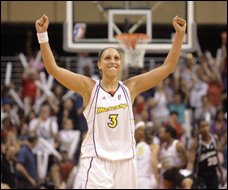 The toughest – and most annoying – part of Most Valuable Player selections is defining the criteria for "value".

There are a few ways to look at the "MVP" award:

When you consider that the WNBA has only given the award to five players in 12 years, four of them receiving more than one, you see that the award is given to a combination of #1 and #2, leaning toward the most outstanding player. What I like is that defense is a strong factor in the decision, at least in comparison to the NBA, which is much more difficult to figure out.

By all indications, this year’s MVP race will bring a new face to the elite class of WNBA MVPs. In fact, the race might seem extremely simple to some observers – Candace Parker has been atop the WNBA.com MVP rankings all season and she could certainly fit all three definitions presented above. However, I actually think there’s reason for pause – Parker plays next to a superstar teammate. So in order to determine the MVP, we have to figure out what it means to play next to a superstar.

Parker exemplifies what I like to call "The Superstar Teammate Principle" (STP). It’s a simple principle really that just represents common sense – if player A and player B are both superstars, we cannot deem one more valuable than the other unless we can argue that the absence of one would be considerably more detrimental than the absence of the other.

The underlying concept of this principle is that the very presence of one superstar is likely to make every player around them better. So when two superstars play together, it is likely that they are actually making each other better as well. Therefore it would be extremely difficult to call either "most" value when either would be disproportionately dependent on the other to win that award

That’s why I tend to most enjoy defining value by replaceability -- it takes into account the Superstar Principle and rewards players who can single-handedly lift an entire team. What I like about the perspective of replaceability is that it tells you something about a player’s ability to take over games but also creates a hero narrative of the player who has to step up in the face of adversity, even if their team loses. I think that drama is a huge part of sports and the notion of an irreplaceable player captures that drama element.

Sound individualistic? Of course it does – it’s an individual award. Team awards go to the conference and playoff champions; there’s no "Team" in MVP.

Well…that all sounds great…but how on earth do we figure that out?

Criteria for the Most Irreplaceable Player

A few years ago, Kevin Pelton laid out five criteria for an MVP – efficiency, consistency, versatility, winning, and a propensity for being spectacular. As much as those criteria could be used to identify the most dominant player, I think they also form the foundation for finding the most irreplaceable player, if we can somehow take the STP into account.

So it usually helps me to break down criteria like these into questions:

1. Can the player be relied upon to have a positive influence on the game when they’re on the floor?
2. Can they create their own offense when the team needs it?
3. Do they use possessions effectively?
4. Can they be used multiple ways on the floor to adjust to match ups?
5. To what extent do they help their team win games?

So the STP would apply most directly to question five – if there are multiple superstars on a team, can we figure out a way to figure determine a) which superstar contributed more and b) how much more they contributed compared to teammates? I think David Sparks’ Boxscores can help us in that regard.

According to the Arbitrarian blog, Boxscores are an estimate of individual player value that combine individual contributions and team success, allocating the most credit to players who did the most to win the most. So what we could do to address the STP is look at how much more credit a player deserves for wins than their teammates. That will help us determine which players are doing the most for their team relative to their teammates. So that you can visualize what I mean, here's the latest Boxscore graphic as created by Sparks: 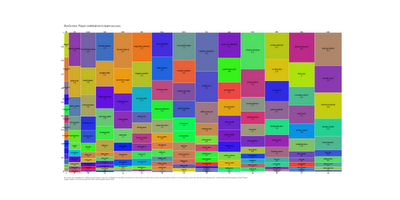 It is tempting to just name the player with the highest Boxscore the MVP, however I think it is also necessary to use a few other numbers to answer the above criteria questions and bring us closer to finding the most irreplaceable player. So here’s how I laid it out, with each number referring to the criteria above:

I do think consistency is important, but I don’t know of a good consistency statistic without doing advanced statistics…so for now, we’ll try this. Usage is in there as an indicator of how much a team relies upon a given player to make plays.

Since it’s unlikely that a MVP would be a non-all-star, I will draw my candidates from the list of all-stars I posted yesterday.

The top 5 was determined by ranking each player in each category and then assigning them points in reverse order. The points were tallied and here's what I got:
.nobrtable br { display: none }


I have to say that I’m surprised Sophia Young is second on this list – given the STP and the fact that she plays with two star teammates, I was originally thinking she wouldn’t have a chance. However, she has the highest Boxscore on the Silver Stars and it is .8 of a win above Ann Wauters, who is second.

Young’s numbers indicate that she is able to score efficiently without wasting many possessions (6th highest points per zero point possessions in the WNBA) and she has the second highest plus/minus rating in the league. When she’s on the court, she has a very positive effect (offensively and defensively) and that’s definitely makes her valuable to the Silver Stars – perhaps more than people give her credit here.

As for Taurasi -- would it be fair to consider her the MVP with her team in last place in the Western Conference? Well, think of it this way – where would the Mercury be without Taurasi? Likely much worse than the 12 wins they’ve put up so far this season. Also keep in mind that 12 wins would put them a half game out of 4th in the Eastern Conference as well.

Although Taurasi’s plus/minus numbers are lower than Young, she is clearly relied upon heavily by her team, as evidenced by her high usage rating (third highest in the league) and she's the third most versatile behind Leslie and Parker. Her defense isn’t really taken into account, but as Taurasi goes, so goes the Rover defense. So as an all-around player, it’s not that difficult to make a case for Taurasi as the MVP. If the Mercury even get close to the playoffs, I’d say Taurasi is a lock for the MVP.

The Tie-Breaker: Performance in wins vs. losses

So how would we break the tie if the season ended today? I would compare how each of them has performed in wins and losses to try to determine how important their performance is to their team’s success. And I think that illuminates an important distinction between the two.

Taurasi is one of the best scorer’s in the league, but also one of the best ball handlers and passers. So although both Taurasi and Young have perform a lot better in their team’s wins, the major difference is that Taurasi has twice as many assists in wins (5.0) than losses (2.5).

That says to me that Taurasi is a huge contributor on her team not only for defense and scoring, but also facilitating scoring opportunities for teammates. When you watch the Mercury play, I think that holds true, however she only seems to play the role of the facilitator in spurts, partially because of the uptempo style of play that is predicated on taking quick shots on the break. This is something that I’ve observed about Mercury games previously.

So for right now, Taurasi’s additional abilities as a playmaker are what give her the edge as the Most Irreplaceable Player in the WNBA to this point and therefore, my MVP.

Despite the fact that STP that was built around Parker’s situation, Parker still comes in third, which is quite a testament to her talent. She still has the second highest Boxscore differential in the league. The fact that Leslie holds the Sparks together defensively should be taken into account as well. Her ability to play strong team defense has enabled Parker to win a few games offensively. There’s also the intangible factor that Leslie has drawn double teams in the post which gives Parker a little more room to make things happen.

I’m surprised the Lindsay Whalen didn’t rank higher (she came in 6th). She has the largest Boxscore differential and is definitely one of the more versatile players in the league. However, her plus/minus and usage ratings are lower than expected, which hurt her chances. If those numbers improve after the break and others’ decrease, she could end up in the top 5. For the record, I’ve been rooting for Whalen as MVP for some time.

If mentoring rookies were a factor in the MVP selection, Lisa Leslie would deserve some credit for the way she's helped Parker on and off the court. And there's no way to account for dynamics like that "objectively".