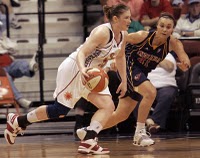 Earlier in the season, I tried to define some point guard styles and presented a few examples of each style. I have now refined that a little to come up with five point guard styles. And each style can be explained statistically. With the help of the Arbitrarian’s playing style spectrum, we can even visualize those different playing styles as they relate to one another.

I find point guard styles helpful in understanding how the pieces of a team fit together and which combinations work well. However, I think people sometimes characterize point guards in terms of what they can't do rather than what they do well. So this is more descriptive than explanatory – it’s not making claims about value or productivity, but what qualities each point guard brings to the floor. I think most people favor "pure point guards", but it’s clear that a team can win with point guards that aren’t "pure" as well.

This is something I’ve thought about for a while and I’m just now nailing it down with the WNBA point guard rankings that I also just posted today. I developed the types from observations of various point guards, both in the NBA and WNBA. I then tried to find prototypes of each type and looked at their numbers in my point guard rankings. It would be interesting to look across career numbers and see how the various types change over time, but that is a larger undertaking.

Initiator: the basic function of any point guard – comes down the court and gets the team into the offense. They are likely players who just get the job done without taking risks. This type of point guard probably has a below average usage rate, average assist ratio, and average pure point rating. Examples: KB Sharp, Kiesha Brown, and Tully Bevilaqua.

Distributor: These are the players who have the court vision and ability to find players in scoring position and get them the ball to pick up the assist. They might take a few more risks than an initiator, but also limit egregious mistakes. This type of point guard is characterized by a below average usage rate, an above average assist ratio, and an above average pure point rating. Examples: Shannon Johnson, Vickie Johnson, Temeka Johnson and Loree Moore (what is it with the Johnsons??).

Pure facilitator: These are the players who will make the highlight film passes that make you think they have "eyes in the back of their heads". They take considerably more risks and might have more turnovers, but also have the ability to break down a defense and create scoring opportunities by forcing the defense to shift. This type of point guard is characterized by an above average usage rate, an above average assist ratio, and above average pure point rating. Examples: Leilani Mitchell, and Ticha Penicheiro.

Scorer: These are point guards who can break down a defense and score for themselves more effectively than the pure facilitator. They have a scorer’s mindset, but also have the skill to initiate or distribute. These types are characterized by above average usage rates, below average assist ratios, and at or below average pure point ratings. The statistic that really sets them apart as well is their high points per zero point possession rating. Examples: Diana Taurasi, Candice Wiggins, Becky Hammon, Deanna Nolan, and Ivory Latta.

Combo guards: So by defining all the other types, it’s easier to find a good definition for the nebulous "combo guard" label. I would define these guards as different than shooting guards in point guard bodies. To me, a combo guard is a player that can create scoring opportunities for themselves and facilitate for others. It’s a fine line but I think numbers help to define it. These players would have above average usage rates, assist ratios, and pure point ratings, but also have a high point per zero point possession, but may also simply have a balance of all of the above. In comparison to the other types, there’s a wide range of quality. Examples: Lindsay Whalen, Sue Bird, Dominique Canty, and Lindsey Harding (ranked #25 in the more recent rankings).

All about decision making

To me, playing point guard is all about decision making. I think what should be evident from these types is that the best point guards aren’t just "pure", but they make the best decision for their team given their own abilities and those of their teammates. For example, I don’t think the fact that Taurasi scores so much should limit her ability to be a lead ball handler. She has a 59.41% true shooting percentage – that’s top ten in the WNBA among players who have logged significant minutes. When she can score that efficiently, it’s likely that the best decision for the team is for her to shoot.

Conversely, the fact that Tully Bevilaqua does not do much beyond initiate the offense is not inherently bad (though the Fever need more right now). If there are players around her who are able to create scoring opportunities in other ways and she isn’t a great scorer or turnover prone, then the best decision is to get the offense going so others can get their hands on the ball.

The same goes for combo guards, except the range of quality in combo guards can vary greatly, which is probably why they’ve been demonized (at least in the NBA). Some guards become combo guards simply because they make bad decisions – they have the ability to distribute or facilitate, but shoot far more often than they should. Their poor shot selection or shooting ability is probably characterized by low true shooting percentages and zero point possession statistics – examples of that are Dominique Canty and Lindsey Harding.

However, Lindsay Whalen makes outstanding decisions and she exemplifies why combo guards are so enticing – if you have a player at any position who is able to do everything, it makes it easier to build around them. If a team starts with a good combo guard, it’s easier to find a backcourt mate and build a system around flexible guard matchups. I actually believe that Ivory Latta could eventually be classified as a "combo guard", however at this point in her career, she’s much more of a scorer. 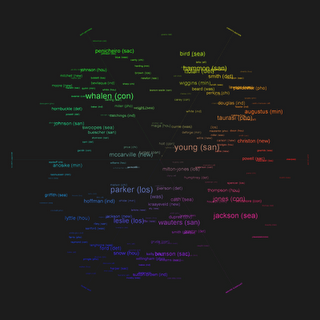 So as it turns out, looking at assist ratio is a really easy way to see where point guards fall across the Arbitrarian player styles spectrum. Players with higher assist ratios tend to be greener -- higher on the pure perimeter axis and closer to it. Players with lower assist ratios tend to be redder – higher on the perimeter scorer axis and closer to it. It would seem most logical that combo guards would fit somewhere in the middle of the pure perimeter and perimeter scorer axes, but as it turns out, Whalen falls closer to the scorer’s opposite or utility player axis.

I would definitely be interested in people’s thoughts on these typologies, especially in terms of whether the numbers/descriptions make sense. Is one style more valuable in the WNBA than others? Are there players that exemplify a style that I’ve ignored? What other players would best fit around each style? Should we even worry about style at all – is it really all about production?

Although my definition of a "combo guard" is slightly different -- in his terms, I would consider it a hybrid facilitator/scorer personality -- I think he makes an excellent point. It would seem that Canty and Harding fit his definition of a combo guard -- point guard skills with a scoring mentality. As described above, I think there are plenty of scoring point guards that are effective, it's just a matter of a) putting the right players around them and b) making sure they're not chucking terrible shots.

Ballad for the Combo Guard
http://ballhype.com/story/ballad_for_the_combo_guard/