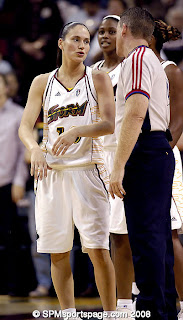 In a sense, Sue Bird and Lindsay Whalen -- easily the top two point guards in the WNBA -- make playing point guard look like more of an art form than an arbitrary positional classification.

On one hand, there are times when they can dominate a game by creating scoring opportunities for themselves, seemingly able to get to any spot on the court they want. But on the other hand, they might not score for long stretches, usually because they’re trying to get others involved or trying to establish the tempo of the game.

Either way, they usually seem to have complete control over the action, choosing their opportunities wisely and making the best decision for their team’s success. They are combo guards in the truest sense of the term – they are versatile enough to adjust their style to play the role of either facilitator or scorer depending on what their team needs.

Although both are versatile point guards, Sue Bird’s versatility will take on increased importance when the Storm face the Sun today. The Storm will be without reigning MVP and Defensive Player of the Year Lauren Jackson for the remainder of the season and if they want to keep their championship hopes alive, they’ll have to collectively make up for her lost production on both ends of the floor.

As the team’s second leading scorer, Bird has taken on the brunt of the scoring burden for the Storm. However, has the need to score changed the way Bird plays? She doesn’t seem to think so.

"I’m just taking what comes my way," Bird says. "I don’t think I played any different tonight than I have all season. When the shots are there, you gotta take them. I’m just trying to stay aggressive."

However, the statistics tell a different story – the need to score more has actually changed the way she’s playing point guard. The shift in style simultaneously says a lot about Bird’s versatility as a point guard and the importance of having a point guard that fits the combination of players in a team’s lineup.

So has Sue Bird changed her style of play?

The Storm played five games before taking the break for the Olympics without Jackson in addition to the one game against Houston on Thursday night when play resumed. I first wondered about whether Bird had changed because when I looked at their synergy score in the five games before the break.

The Storm’s synergy score had dropped to 64.19 during that five game period from 70.47 over the entire season. Since synergy is a measure of ball movement, a logical explanation for such a change would be the point guard’s play.

In the six total games that Jackson has missed, the biggest statistical change for Bird has been in her assists – she’s averaged about half as many assists (2.8) as she’s averaged for the season (5.4) in those six games. The reason might be that she has needed to take more shots in order for the Storm to win in Jackson’s absence – in their four wins she’s averaged 14.75 shots per game whereas she’s had 8 shots per game in their two losses.

But assists alone are not the best measure of a point guard. For that we have other metrics.

How Bird’s playing style has shifted

I’ve found that the best single measure of point guard quality is John Hollinger’s pure point rating. The formula essentially measures the true value of each assist (2/3) minus turnovers per minute, in other words evaluating how productive a point guard is per minute by looking at their net value to the team as a play-maker.

Although Bird has scored more during this stretch of six games, her pure point rating has dropped considerably indicating that she has been less of a playmaker. For the season as a whole, her pure point rating is 2.61. In the last five games in which Jackson has been out, Bird’s PPR has been -3.96 meaning that she’s not spending as much of her court time distributing the ball and making her team better.

However, a low assist ratio doesn’t mean a player is bad – all-star caliber guards like Jia Perkins (14.87) and Diana Taurasi (13.96) are in about the same ball park and they are clearly not bad players. What it does say is that Bird has transitioned from a combo guard who balances passing and scoring to a scoring guard who is passing much less.

And as it turns out, assist ratio tells us a lot about the type of point guard a player is according to the Sparks Playing Styles spectrum. From that player styles spectrum, we can derive five types of point guards: initiator, distributor, pure facilitator, scorer, and combo guards (for descriptions of each click here).

Players across the spectrum can have all the skills of a traditional play-maker, but the mark of a great player (under a good coach) is the ability to play to her strengths while providing what the team needs. And fundamentally, that's a matter of decision making -- if you’re a good scorer, sometimes the best decision is to shoot.

Right now Sue Bird is playing more like a scoring guard because that is what her team needs. That’s not a bad thing at all and, in fact, it appears to be the best decision for her team -- in games that she's shooting more without Jackson, they're winning. But it's clear that has an effect on their team dynamics -- as a team there appears to be considerably less ball movement and they're turning the ball over more often (21.11% of possessions vs. 18.30%) with Bird operating as more of a scorer.

Where this will be even more interesting to watch in the playoffs. How sustainable is this adjusted style of play against the league's top competition? Can Bird carry the team to realize their championship expectations without Jackson?

What does this mean for the Storm’s chances against the Sun?

For true fans of basketball, it doesn’t get much better than watching Bird and Whalen run their teams (update: unfortunately, it looks like Whalen will be out due to an ankle injury). They both exemplify the new breed of combo guard and have the ability to take over a game just by taking what the other team gives them, scoring or not. As Diana Taurasi has said, that’s what makes Bird so great.

"She's one of the few players in this league that can go the whole game without taking a shot and affect the game more than anyone else. That's why she's the best point guard in the league, hands down."

But in the last game against the Sun that became a problem. Bird deferred to her teammates so much in a tight fourth quarter that she almost disappeared – she didn’t shoot, get an assist, or set the table for someone else to make a play. In fact, it looked like everyone was just waiting for on their stars to step up.

So the more aggressive Bird might be a huge asset to the Storm, even without Jackson. In the last game they needed someone to assert themselves in critical moments. Since the ball will be in Bird’s hands most of the time anyway, it is to the benefit of the team that she make the decision to step up and take control of the game when appropriate.

However, the Sun might have too much for them – they beat the Indiana Fever and Atlanta Dream by 26 points each in back-to-back games on Thursday and Friday. Plus they added Erin Phillips and Svetlana Abrosimova, who played on the Australian and Russian Olympic teams respectively. Both add additional scoring punch and defense.

Seattle has a chance to win if they can play the type of defense that they apparently played Thursday night against the Houston Comets. But let’s be honest – the Sun are playing some of the best basketball in the league right now whereas Houston was missing a key player.

Given that the Sun beat the Storm in Seattle with Lauren Jackson earlier in the season, it seems like the Sun have an edge in this game, as they are playing extremely well and have added firepower.

The Sun are definitely a team to watch: The Sun were one of my five teams to watch after the break, but I never imagined them to play this well. From Tamika Whitmore via WNBA.com, ""We're sending a message to people that it's time to get down to business,'' Whitmore said. "We just have to keep it rolling."

Whalen for MVP: Other players attract more media attention, but Lindsay Whalen is a clear candidate for the WNBA's Most Valuable Player award, as described by Matt Stout. If she's able to lead the Sun to the best record in the East, it will be difficult to make an argument against her.