The Shock-Mystics Trade Analysis: Who Wins theExchange of Experience for Potential?

Share All sharing options for: The Shock-Mystics Trade Analysis: Who Wins theExchange of Experience for Potential? 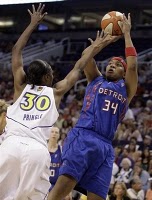 I have to confess that watching U.S. basketball players blow out Olympic competition in the preliminary rounds has only left me more impatient for the return of the WNBA.

So the Mystics-Shock trade of Taj McWilliams-Franklin for Tasha Humphrey, Eshaya Murphy, and a 2009 second-round draft pick is a welcome WNBA diversion and gives us something else to look forward to after the Olympic break.

But is there a clear cut winner in this trade?

What makes the trade hard to evaluate is that it is obviously an exchange of experience for potential, which just leads to further questions.

Clearly Detroit was looking for a replacement for Cheryl Ford as they try to make another playoff run, but was it worth giving up the enormous potential of Tasha Humphrey?

Clearly Washington has decided that this is not their year to make the playoffs, but was it worth giving up their only all-star caliber player?

In my estimation, the answer to both questions is "yes". But to get a sense of the degree to which each team stands to benefit takes a bit more analysis and the statistics might help.

Was it worth giving up the enormous potential of Humphrey?

Tough offensive rebounding has been the foundation of Detroit’s success over the last few years, so it is an urgent need if they want to perform well in the playoffs. As an example of the importance of offensive rebounding, in the last five games before the break – three of which were played with Ford and Pierson -- they went 1-4 and their offensive rebounding percentage during that time was below their league-leading season average (32.9% to their normal 36.7%).

While McWilliams-Franklin doesn’t entirely replace Ford’s offensive rebounding (2.3/game to Ford’s 3.1/game), she does add a rugged post scorer to the Shock’s roster as well as a strong help defender, as evidenced by her strong block and steal percentage numbers.

Although Detroit fans may lament losing Humphrey’s enormous potential, that potential is not quite as valuable to the Shock's championship run as McWilliams-Franklin’s rebounding and defense. However, Humphrey’s potential might be perfect for a rebuilding team.

Was it worth giving up a six-time all-star in McWilliams-Franklin?

The Mystics are two games out of the playoffs with 8 games left after the break, four of which are on the road. Given that they have gone 4-9 on the road this season, it’s possible they decided that the playoffs are out of reach (though of course, they will deny that). And even if they did make the playoffs, the reality is that they were not going to go very far.

… Taj only signed a one-year contract with the Mystics, and given that she is nearly 38 years old, there is no guarantee that Taj would be back next summer (would you re-up if you were Taj?). This means that by trading Taj now, the Mystics manage to get some value for her, rather than nothing.

Although they lose the post presence and veteran leadership that McWilliams-Franklin provided (and according to the Arbitrarian’s Boxscores, their most valuable player), they add value that they can continue building on in the future so that they can move forward. And there are plenty of reasons for a forward-thinking franchise to move forward with Humphrey.

The reasons why Humphrey is a good piece to move forward with are the same reasons I believe she is a worthy candidate for the 2008 All-Rookie team: she’s one of the most efficient, versatile, and promising rookies in the WNBA this year. Put her next to Alana Beard, Monique Currie and Crystal Langhorne and I think you have an offensive team that has the potential to develop into something pretty solid. 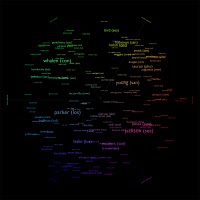 But they still have some major deficiencies. They still need a point guard who can penetrate and make things happen off the dribble and they will have to find a way to replace McWilliams-Franklin’s toughness down low. In fact, one thing that jumps out to me as I look at the Arbitrarian's SPI player styles spectrum is that adding Humphrey is adds another perimeter oriented scorer to their lineup, meaning that their foundation for the future is somewhat imbalanced. It will be interesting to see how they address this imbalance as they move forward and adding another strong "utility player" like Nakia Sanford may be part of the answer.

Which leads to another point -- defensively, this is not a team that stands to strike fear into the hearts of their opponents. It’s worth noting that even pre-trade, no matter what means you use to measure defense, the Mystics are one of the worst in the league…and defensively, neither Humphrey nor Langhorne are outstanding. So whomever they add along the front line will absolutely have to be a good defender. Fortunately, they're in position to address multiple needs through the draft.

So who got the better of this trade?

Overall, I think the best way to evaluate this trade is by looking at how much closer it brings these two teams to their goals – the Shock are looking for another championship and the Mystics looking to build for the future. Given what we know about the players, I’d have to say that Detroit’s prospects for winning a championship are greatly improved, whereas the Mystics’ future is still uncertain because they still have major defensive deficiencies. So I’ll give the edge to Detroit for now, even if they don’t win the championship, which is never a guarantee anyway.

Those questions put a lot of pressure on Washington to develop their young talent and make some shrewd moves during the upcoming off-season.

The Mystics claim that, "Shay (Murphy) is a high-energy second year player who works hard on the defensive end." This is Murphy's 3rd team in her short two year career, so could her defense help her earn more playing time with the Mystics? They have a crowded back court so it's tough to say...