The Five Most Intriguing Players To Watch Down the Stretch

Share All sharing options for: The Five Most Intriguing Players To Watch Down the Stretch 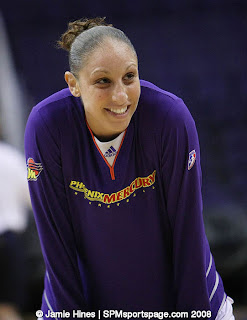 I don’t know about you, but watching the dominance of Team USA in the Olympics just wasn’t an adequate substitute for good competitive basketball games.

Thankfully, we only have one more day to wait for the WNBA to resume.

And what will make the completion of this season so exciting is that the league is experiencing a year of parity, which definitely benefits a growing league. Every single team except the Atlanta Dream has a shot at making the playoffs. It doesn’t get much better than that.

But as a relatively new fan of the WNBA game without a real home team to root for, I often watch games based upon players or match-ups that I find particularly intriguing. That has led to me prioritizing a few teams over others but almost constantly changing my favorite team as I grow to appreciate different players or styles of play.

So this post is about five players that I’m particularly excited about as the WNBA resumes play. They are not necessarily the best five players in the league, but instead players at the center of some of the more intriguing storylines around the league as we look forward to the playoffs.

Kelly was one of the most productive rookies before the break and has also shown enormous breakout potential.

But there are two things that will make her one of the most interesting players to watch as we get close to the playoffs.

First, and perhaps most important, she’s had practice time during the Olympic hiatus and I think she will benefit from that practice more than any other player. It was obvious from watching her play in their first half that she was relying on her instincts rather than the team’s system. It stands to reason that with time to learn the system better and use her instincts within the team concept, she’ll be even more productive.

Second, she has a real opportunity to shine while Rebekkah Brunson recovers from injury. It’s a chance to prove the point that her Diamond Rating has shown all year – that with increased time, she’ll be even more productive.

Considering that the Monarchs are currently fourth place in a very tight Western Conference playoff race, Kelly’s performance in place of Brunson could be the x-factor that determines whether they make the playoffs or go home early.

But what I like most about her is that she’s a scoring point guard who is also extremely efficient and makes good decisions with the ball as shown by her ratio of points to non-scoring possessions that she was responsible for and her plus/minus rating.

Here’s what I’ve wrote about her in my last point guard ratings, in which she ranked 9th:

Right now, Jia Perkins (ranked #9) is the better point guard – she is not an outstanding distributor based on her season-long numbers, but she makes better scoring decisions with the ball (than Canty) as evidenced by her rank in points per zero point possession. She also has the lowest turnover percentage (8.21%) among this set of point guards. It would be interesting see what Perkins’ numbers might be if she spent a whole season as a team’s point guard.

Her outstanding season before the break is probably what led WNBA.com to list her as their top candidate for Most Improved Player right now. And had their been an all-star game this season, she would have almost certainly made the team based on her numbers.

What makes Perkins a player to watch is that the Sky still have an outside shot at the playoffs and if that’s their goal, Perkins’ point guard play will be a critical part of their playoff run. What she brings to the team is someone who is able to manage the offense and make the best decision for the team at any given moment. She will have to continue that for the Sky to have a chance.

Like Kelly, Little is a player who could be expected to benefit greatly from the Olympic break.

She performed extremely well for the Storm in Lauren Jackson’s absence before the Olympic break. But she’s on her third team in two seasons and arrived in Seattle mid-season. So the additional practice time should help her use her instincts more effectively within the Storm’s system.

Little is very creative in traffic, showing off reverses and scoring with her off hand. The ability to convert down low is very important in this league, especially for an undersized post player like Little. Last year in San Antonio, Little shot 41.2 percent and she was at 42.0 percent in Atlanta, so we'll see if she can keep up her 50-plus percent shooting with the Storm. One thing that should help in that regard is that Little is playing virtually exclusively at power forward for the Storm, having played more on the wing in her last two stops.

What makes Little a player to keep tabs on as the WNBA resumes play is that with Lauren Jackson out for the remainder of the regular season, Little’s performance will be critical, especially considering how close the Western Conference playoff race is.

Although other players stepped up for the Storm as well and they have the weakest strength of schedule to finish the season, it’s also clear that they will need Little to continue her high level of play in order to maintain their position in the playoffs. Because she’s replacing the reigning MVP and Defensive Player of the Year, this is going to be one of the more interesting stories to follow over the next few weeks.

You probably know by now that I think Sylvia Fowles is on her way to becoming one of the most dominant post players in the WNBA.

She played extremely well in the Olympics, arguably being the second biggest contributor to Team USA’s success, based on the numbers. By all reports, her game improved by the day with the help of Lisa Leslie’s mentorship. But I’ve gushed about her enough.

The reason I believe Fowles will be one of the most intriguing players to watch after the break is that the Sky could really use a boost if they want to make a run at the playoffs. But the key lies in the Sky’s strategy – will they find a way to fully integrate Fowles into their offense and allow her to continue the progress she showed in the Olympics?

In the first part of the season before her injury, she looked almost like an after-thought in the Sky’s offense scoring mostly on broken plays or by just being in the right place at the right time. If the Sky actually start running the offense through her, she’s the type of player who would demand double teams and open up scoring opportunities for Candice Dupree and Jia Perkins.

So really what makes Fowles one of the more interesting storylines has little to do with her – I think we know what she brings. What makes this storyline interesting is whether the Sky will figure out a way to maximize her talent.

Taurasi is arguably the best player in the league right now and has demonstrated the ability to singlehandedly take over a game…on both ends of the floor.

What makes her an interesting player to watch is that you figure that a competitor like her wants to be back in the playoffs to defend their WNBA title. It would take an MVP performance to pull it off. And Taurasi is the kind of player who could make it happen.

She was arguably the biggest contributor to Team USA’s success and a strong contender for the WNBA MVP despite her team being last place in the Western Conference.

What’s underrated is her role in Phoenix’s Rover defense. When she applies pressure to the other team’s lead ball handler above the three point line, the Mercury play extremely well. Their strategy is usually to play relaxed defense in the first half and then ramp up the pressure in the second half (maybe to save energy?) but they’ll have to turn it on for every minute of their last seven games if they want to make the playoffs.

Moreso than the other stars in this league, the Mercury’s success is almost entirely dependent on Diana Taurasi…on both ends of the floor. Despite the temptation of tanking for a high lottery pick, I can’t see a competitor like Taurasi just throwing in the towel. And that fire is what will make her the most intriguing player to watch over the next few weeks.

Unfortunately, I don’t know much about Erin Phillips, but Connecticut is justifiably excited about her return to the lineup. I used the 2006 rookie class as a point of comparison for this year’s rookie rankings. Phillips ranked as the third most promising rookie from that class, behind Seimone Augustus and Cappie Pondexter. With the power of hindsight, that sounds ridiculous because Candice Dupree and Sophia Young are clearly all-star caliber players, but with increased minutes, Phillips is a prime candidate for the type of breakout performance that could give the Sun a boost heading into the playoffs.

An interesting side note, speaking of players to watch – the WNBA has made an interesting decision to allow fan voting for the MVP this year.

T-Mobile will also be the presenting partner of WNBA MVP voting, which for the first time will enable fans to participate (at WNBA.com/mvpvote). Voting beings Aug. 28 and will continue through Sept. 15. The winner will be named during the WNBA playoffs. The online fan vote will comprise 25% of the total vote, while media votes will account for 75%.

When I first look at that, it seems like a terrible idea – the MVP voting is already extremely vulnerable people’s subjective definitions of "most valuable", which makes it difficult to arrive at a consensus MVP. So it seems that leaving it in the hands of the media is best since one would think they have a professional responsibility to make an informed decision. My fear is that fan voting will reduce the MVP race to nothing more than a popularity contest – so right now, I would predict Candace Parker as the winner.

On the other hand, this is an excellent opportunity to encourage fan involvement and since the award is so subjective anyway, the league might as well allow fans to have some input. Just more material to analyze!