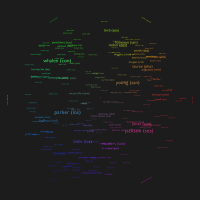 I have always found that one of the most exciting things about watching sports is pondering how the individual players on a team come together to win games.

Of course, there are always more factors at work than individual talent – strategy, match ups, leadership, and chemistry come to mind – but imagining possibilities for improvement is one of the greatest joys of being a fan to me.

So knowing how well individual players complement each other could help us imagine trade possibilities, evaluate draft selections, the impact of a missing player, etc.

Well, David Sparks at the Arbitrarian blog has created a novel graphical visualization of WNBA playing styles, which I think is a step forward in player analysis. Hopefully, it enables a deeper analysis of team dynamics, perhaps reinforcing and extending my thinking with some stronger data.

Aside from just being a cool representation of information, I find this work to be quite useful for describing the composition of WNBA teams and further understanding what creates good team chemistry.

I thought an initial way to make sense of this would be to take the most effective lineups from the top five teams in the league (by record) and try to make some more advanced assertions about team chemistry – what are some of the playing styles of the top combinations and why do they work?

Brief Background on the Visualizations:

The majority of the work at the Arbitrarian blog is creative statistical analyses and visualizations of NBA players’ individual contributions to team success (based on a statistic currently called "Boxscores"). Among the most interesting work is his NBA playing style spectrum, which is a novel graphical visualization of playing style markers. Here’s a description of the work from his blog:

Very rudimentary factor and cluster analysis I performed a long time ago indicated that there are distinctions in the data between players who tend to try to score a lot, those who play a "smaller" game, and those who play like "big men." In terms of the NBA’s tracked counting statistics, this translates to a differentiation between those who specialize in points and field goal attempts, rebounds and blocks, and steals and assists. I have chosen to call each of these three tendencies Scorer, Perimeter, and Interior, and collectively they form the SPI Style Trichotomy.

He applied the same thinking to the WNBA, and although there might be something "lost in translation", the results are pretty interesting because the way he calculated the tendencies should cross both leagues pretty easily.

More information about that can be found at his site…but hopefully that provides enough of a basic understanding to be useful for analysis.

The six categories labeled on the six spoke graphic (at the end of each spoke) are as follows: Pure Scorer, Perimeter Scorer, Pure Perimeter, Scorer’s Opposite, Pure Interior, and Interior Scorer/Perimeter’s Opposite. A well balanced player – someone sitting in the middle of the spectrum – is labeled as "mixed". If you look at the formulas, it should make sense how these categories were determined.

The names that appear larger – many of which are also in the most effective lineups above – are the more productive players. 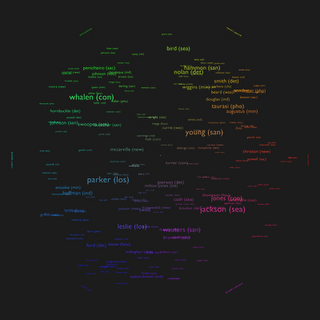 Just to clarify what a "scorer’s opposite" is, it doesn’t necessarily mean "defender", but simply that scoring is not the defining factor of the player’s game. It embodies what I might call a utility player – someone who can come in the game and do a little bit of everything for the team.

Vickie Johnson and Alexis Hornbuckle are the strongest examples of utility players out of the players listed above. Johnson’s assists and Hornbuckle’s steals make them perimeter-oriented "utility players" (not the most flattering language, but it works).

Just to make the language a bit easier to apply, here is a key for interpreting how the colors match the labels, which is hopefully helpful in understanding the color spectrum:

...red to purple: interior scorer (IS)

Using the spokes as guidelines, we can also look at where a given player sits relative to a particular dimension to further specify their playing styles (using some subjective interpretations of color hue as well).

For example, using categories for point guards that I’ve used in the past, Becky Hammon and Deanna Nolan are creators (C), Sue Bird is more of a scoring distributor (SD), and Lindsay Whalen is an utility/combo guard (UC).

Given the detail of the graphic, it’s clear that I could go on defining each position with increasing specificity, but this is enough to move forward for now.

The most effective lineups on the WNBA’s most successful teams

So rather than analyzing individual players on that chart, I thought I’d look at how these styles fit together on some on the five best teams in the WNBA: San Antonio, Seattle, Los Angeles, Detroit, and Connecticut.

* I chose the lineup that typically logs minutes for the Sun, although it looks like Turner is getting less minutes lately.

Playing styles of the most effective lineups

And here are the labels applied to those most effective lineups:

There’s a lot of interesting stuff there, but I’ll make some comments on San Antonio since I’ve seen them twice already this week.

So since I’ve had the opportunity to watch the Silver Stars twice this week, I’ll dig a little deeper into their lineup. As I’ve noted before, the Silver Stars are a really balanced team and I think looking at these player styles further demonstrates that. One way to think about it is by looking at their star players and then seeing how the others complement them.

The latest WNBA.com MVP rankings have three Silver Stars in the top 15: Young (PS), Hammon (C), and Wauters (IS). It should be clear how they complement each other. Young demonstrates an interesting element of these playing style categorizations. When I think about Sophia Young, I hardly imagine a perimeter scorer.

However, in watching her play this week, it’s clear that she gets a lot of her points by drawing her defender out of the post and then using her quickness and solid mid-range shooting to score. The points she scores inside are often on cuts to the basket rather than back to the basket plays.

So although Young is not a perimeter scorer in the way we normally think of it – hitting threes and having guard skills – her effectiveness depends on her ability to work from the outside in (this is why the Sparks gave her so many problems – she tried to establish her post game and they were just too quick and too long).

Anyway, Young’s outside-in game next to Hammon’s ability to create from the outside and drive to the basket is a potent combination. Already you can see that the strength of this team is their ability to score by attacking the basket. Add to that Wauters’ inside scoring game and they become extremely difficult to defend – it’s difficult to key on one element to stop because they can score from everywhere.

After those three, Johnson (UC) and Buescher (PU) (earn the next most minutes. They are both utility players and they complement the other scorers on the team by doing all the little things – passing the ball and shooting from the outside. Essentially they are the glue that make this team an effective whole.

Part of the Silver Stars’ chemistry seems to be a function of how well the talent they’ve put together complements each other (in addition to an excellent system and long-standing relationships). You could argue that a coach could put anyone around that kind of big three and get results, but it seems clear that having utility players who "fill in the blanks", allows them to establish and maintain a rhythm that the Silver Stars are known for.

The equal and opposite reaction

Again, none of this is to say that having building a team with these complementary lineups guarantee’s success. Match ups count.

When you look at the Sparks’ lineup, it’s essentially the exact opposite of the Silver Stars’ lineup – Leslie is a strong post presence on both ends of the floor, Parker is the ultimate interior utility player, and Milton-Jones is something of a mixed interior player, able to contribute scoring and defense. The match ups had a major effect, especially in the Sparks victory earlier this week.

Hammon and Wauters had similar performances in the two games against the Sparks this season, but Young was the big difference. In the first game she was 8-14 with 20 points in the second game she was 1-5 with 10 pts. When the Sparks are playing well as a unit, the latter result seems much more likely because their interior strength can neutralize Young.

This highlights the fact that there is no silver bullet formula for team building – not only do you need players that complement one another, but you also need players that are dominant enough at their positions to help you win games. League trends are also important – big slow centers have slowly been phased out of the NBA, for example.

These points bring to mind some interesting questions – to what extent should you try to build a contender in response to the competition? In what situations do the bigger stars get the best of the most complementary relationships? What combinations do typical WNBA finalists have? How might this inform a building plan for expansion teams like Atlanta and Chicago?

The complementarity between Deanna Nolan, Katie Smith and Cheryl Ford is also interesting. It's one of the few combinations that contains such polar opposites.

I’ve often thought that Candice Wiggins should be starting for the Lynx. However, when you look at the player style spectrum, she and Seimone Augustus are very similar players, whereas Quinn is more of a pure distributor. In the interest of balance, starting Quinn is the best choice. But that gets right back to the dilemma of choosing between balance and talent.

How the Silver Stars Have Taken Control of the West
http://rethinkbball.blogspot.com/2008/07/chemistry-101-how-silver-stars-have.html

Candice Wiggins: On the Positive Side of "Combo Guard"
http://rethinkbball.blogspot.com/2008/06/candice-wiggins-on-positive-side-of.html