Singular Team Nicknames Get Love Too

Share All sharing options for: Singular Team Nicknames Get Love Too 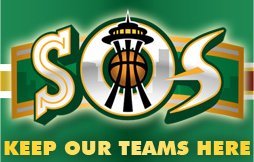 It seems as if the WNBA has dominated the singular team name market with 8 of 14 teams sporting one.

I have to admit I'm not particularly fond of those, especially when they refer to abstractions (like "Magic" or "Liberty") or seemingly benign things (there is rarely reason for a Californian to fear the "Sky").

Anyway, while reading Hoopshype.com for my daily dose of NBA news, I found a comment about Clay Bennett’s distaste for singular names that was somewhat ironic:

Team chairman Clay Bennett has said privately he's not wild about nicknames that don't end in "s." Names that end in "s" are also more enduring to the community, according to Tom Fugleberg, executive creative director at Olson, a Minneapolis-based branding agency. "I think there's more of a sense of a community when you are a fan of the Blazers and not the Storm," Fugleberg said. "There's a feeling that you are a part of that."

Hmmmm… even though I believe the world could do without another singular sports nickname, I’m not sure how Fugleberg came to this conclusion about community.

Correct me if I’m wrong, but the way I see it, there was a mini-movement started in defense of both the Sonics and Storm after Bennett’s intentions to move the team were clear. Maybe Fugleberg would argue that the Storm fed off the energy of the Sonics’ movement, but I’m not sure that’s accurate.

If one way to judge the strength of a community is its response to adversity or threats to the very core of their identity, then I’d say there was a pretty strong sense of community around the Storm.

Although the Storm's attendance has varied from below league average to above average over the years, the community support shown over the past year was impressive. The Save Our Storm group seemed to be pretty effective at rallying the team around the Storm. Then Force 10 Hoops, a group of local businesswomen, stepped up to buy the team.

Seems like they mustered up a solid sense of community to me. Go figure…