The Shock Indoor Classic: Where the Game Sold Itself

Share All sharing options for: The Shock Indoor Classic: Where the Game Sold Itself 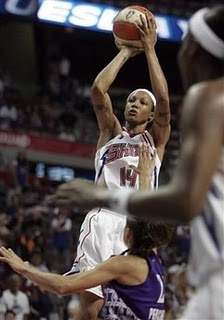 It’s somewhat ironic that while the highly-anticipated Liberty Outdoor Classic made history for playing basketball in a unique venue, the best example of progress in the WNBA was played in one of the oldest arenas in U.S. professional basketball.

The Detroit-Sacramento game was not just the best game of this past weekend (or rather, of the games available via webcast), but it was the best played game of WNBA basketball I’ve seen this season. Although I haven’t watched a whole lot of WNBA basketball over the years, I can comfortably say it was the best WNBA game I’ve seen since Cynthia Cooper was dominating the league in the early seasons of the WNBA (please point me to other games that may fill in the gaps in my knowledge).

And despite history being made and amazing basketball on display, the moment that best reminded me of why I love watching professional sports had nothing to do with either "event". Lost in all the commotion over the Liberty Outdoor Calamity and the Shock’s Indoor Classic was a beautiful moment that had as much to do with basketball as pure human resilience.

A great moment for the Mystics 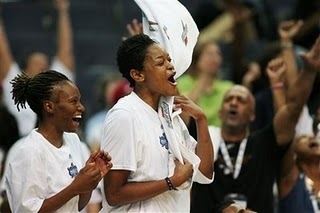 The Mystics’ blowout of the Storm will likely be forgotten (outside of places named "Washington") within a few of days, whereas the Outdoor Calamity will linger in our memories for some time. But the moments just after the end of the Mystics game really struck me.

Had you not known it was a mid-season game, you might have thought that the Mystics had just won the WNBA championship. For a few moments you could almost feel the players’ passion spilling out into plain view. And to me, that’s a good thing.

What struck me was seeing the exuberance of a frequently dysfunctional Mystics team led by an interim coach after beating a contender with the best record in the league based on pure effort and heart when they had every reason to give up. It shows something about the Mystics that has perhaps been lost in a professional sports world dominated by overblown contracts and ego: this team really cares about what they do. And it makes it easy to love women’s basketball.

Any time I get to witness the joy that comes from someone doing what they truly love – even if it’s putting a ball into a basket – it gives me goose bumps. It doesn’t matter if they go on to win the championship, what their attendance was, or whether they are engaged in challenging sexist double standards about women (though all those things are important). What matters is that they truly care about the outcome of that game and it’s worth noting in a society that has become way too wrapped up in the extremes of cynicism and trying to change the entire world at once. 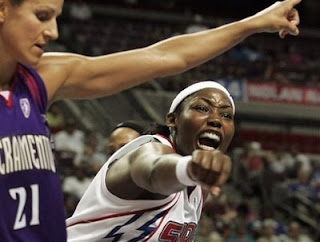 As a nice complement to the emotion of the Mystics’ win, there was outstanding basketball played in Detroit. In reading a couple of recaps of the Monarchs’ 88-85 win over the Shock, I have yet to see one that fully captures how amazing this game was from a quality of play standpoint.

The reason I find this game so noteworthy is because it really challenges the notion that women can’t create their own shots. One could still quibble that the NBA has more players who can create their own offense (Kobe, AI, Paul Pierce, etc), but that’s beside the point. The fact is that the WNBA is becoming team basketball at its best with a healthy does of one-on-one play. The combination is some of the best basketball you’ll ever see.

The most impressive sequence of this game probably occurred in the last minute, but to set the context, in the first half, Detroit seemed to be in complete control of the game. Aside from an outstanding play where Tasha Humphrey (!!) led the fast break and got an assist on the layup to set up a three point play, Detroit seemed to be sleep walking.

Sacramento had taken a 69-60 lead at the end of the third quarter and seemed to be on their way to "shocking" road win in Detroit. Everything seemed to be clicking on all cylinders as the started the fourth quarter as they had a synergy score of 100 over the first three quarters. They had an outstanding true shooting percentage of 67%, including shooting 14-17 from the free throw line.

Rebekkah Brunson went to work inside, killing Detroit in the post with an array of fakes and impressive post moves. But eventually, Detroit – and particularly Deanna Nolan – woke up, starting with their defense and slowing down Sacramento’s offensive rhythm. Down 10 with six minutes left, Detroit managed to rally and take a 1 point lead with 1:27 left. That’s when the drama started.

First Nicole Powell hit an open three off of a cross court pass to regain the lead 82-80. Coming out of a timeout, Nolan beat Ticha Penicheiro off the dribble for a mid-range jumper to tie the game. But Sacramento came right back on one of the better executed plays of the game.

We all know Penicheiro can work magic with the ball, but sometimes it’s the little things she does that make a huge impact. In a simple two-woman play, Penicheiro dribbled across the court with less than 10 seconds left on the shot clock while Lawson was cutting the other way. When Penicheiro stopped and made a brief ball fake in the opposite direction, Lawson changed direction, got a little shovel pass from Penicheiro, got separation from two defenders (Penicheiro’s and her own) and hit an open jumper.

That’s what creating your own shot is all about – paralyzing the defense and creating separation for the shot. On that play it was done with a pair – Penicheiro using her other-worldly court awareness to set up Lawson and Lawson demonstrating good balance and body control in changing directions to get separation for her shot. But Nolan wasn’t done.

After two Penicheiro free throws increased the lead to 86-82, Katie Smith got the ball to Nolan coming off a screen. Penicheiro was there a bit late, but got a hand in Nolan’s face. No worries – Nolan just rose over Penicheiro’s hand to stick the three. She’s incredible – with the game on the line and a hand in her face, she’s shooting jumpers over people from the three-point line. You can’t hope to defend that without cheating.

With 10 seconds left and down 88-85, Nolan continued to impress. She got the ball on the wing and was immediately met by a loose double team. She recognized it, dribbled around it and got off another good shot which just didn’t fall. Smith would get another shot at the buzzer that also rimmed out. But Nolan again demonstrated her ability to create off the dribble in pressure situations.

The game was so incredible that I wanted Nolan to make that last three just so it would go into overtime. Not just because it was close, but it was so well played and well coached in the fourth quarter (the plays designed during the last minute of the game were outstanding) that it seemed like a shame for it not to continue. But ultimately, I think Sacramento deserved this win and that they won it on Detroit’s turf made the game even more impressive.

Even if a team loses by 10, I want nothing more than to see good basketball. That doesn’t mean it has to be slow and methodical basketball. But good basketball in which players and coaches make good decisions and let the combination of individual talent and team chemistry determine the winner. And we can’t forget defense – Detroit would not have won that game had they not slowed down the Monarch’s offense. But there comes a point when -- just like Kobe, AI, Paul Pierce, etc -- players reach the rarefied air of being indefensible.

This game was ultimately the best showcase of WNBA talent -- new and old -- that I've seen, and it didn't even include dunking or outdoor courts. Go figure. ;)

When the Game Sells Itself 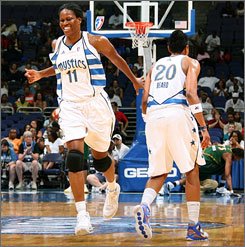 Wrapped up in all of the action this weekend was a great example of the WNBA’s parity – the top teams in both conferences lost to teams on the fringe of scouting for 2009 lottery picks. Two of them – Detroit and San Antonio – lost at home. Some may say that’s a bad thing, but when the games are this competitive and well played, it’s an amazing experience.

I may have overstated the greatness of this past weekend, but I think it says a lot about the current state of the WNBA. Already, the level of play in the league has exceeded my expectations. The talent in this league has risen by leaps and bounds since I first saw the Shock take on the Mercury nearly a decade ago in college. These days the WNBA doesn’t need to rely on fleeting novelty or a gimmick to attract casual fans – the game is truly starting to sell itself on its own merits.

In the last five games, Seattle and Detroit were playing some of the best team basketball (they had team dynamics rating of 41 and 27 respectively), while Sacramento and Washington were among the three worst (4 and -6 respectively). That's why they play the games I suppose...

The 5280 Blog had a great post a few days ago about the issue of parity (as well as the depth of this rookie class) that I thought was a great read. Hopefully he managed to see the Minnesota-San Antonio game this weekend so he can give a report on his fave, Candice Wiggins. An excerpt:

What [the Sparks'] lack of dominance does provide the league, though, is the affirmation that the WNBA is still an exciting, competitive, team-oriented sport. That is one key aspect of the women's game that is so exciting, and such a contrast to the NBA. Furthermore, on a more short-sighted by hardly less important level, it's providing fans with some great basketball. Knowing that no singularly dominant team is going to roll its competition gives great incentive to check out nearly every game the league has to offer.

What a weekend! Between yesterday (Saturday) and today, we had a much-hyped, and genuinely neat (I was going to say "cool" but it was hot out) public event; a televised game that felt like a closely-fought playoff, with well-matched veterans and a one-possession finish decided by clutch play; an overtime game with a loss for the league's most hyped stars; and two big wins for the two teams we almost always support.