Share All sharing options for: How the Fever Played Without Tully…and What It Means For Team Strategy 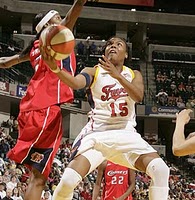 I’ve been trying to figure why the Fever have been struggling so much offensively despite considerable talent, so I’m writing one this game analysis a bit late because I think it’s a particularly interesting dilemma.

I’ve been watching the Fever more closely over the past few games because of my curiosity about how they would replace Tully Bevilaqua in the lineup without losing ground in the Eastern Conference playoff race.

Needless to say, after going 1-3 without Bevilaqua, the Fever are probably as relieved as anyone that the Olympic break is finally here.

However, they should be going into the break on a high note – they actually played two of their better offensive games of the season during the last four games (a Thursday loss against the Lynx and Sunday’s win against the Mercury). I think those two games demonstrate a point that I’ve made before about the Fever: they need to attack the basket more effectively in order to win. And after Sunday’s game, I’m convinced that their struggles have less to do with having Bevilaqua in the lineup than with their team strategy.

What the Fever could learn from the Mercury

I know it sounds counter-intuitive, but in a way, the Fever could learn something from the Mercury’s style of play. The Fever did surprisingly well playing the Mercury’s uptempo style and even took a big lead before they panicked and started playing it safe again. Fortunately, they found their rhythm again in the second half and won the game.

But from what I’ve seen of the Fever, it seems like they flourish when they play loose and within a system of "controlled chaos" to complement their stifling defense...and they falter when they try to play it safe and avoid mistakes on offense. And when I say controlled chaos it’s not the run and chuck style of the Mercury as much as a willingness to attack the defense instead of waiting for a perimeter scoring opportunity to show itself.

When someone is putting pressure on the defense, it allows for better opportunities for Tamika Catchings, Katie Douglas, and Tammy Sutton-Brown (one of the more underrated players in the league). And I often forget about Ebony Hoffman who has also been a large part of their success.

Well, it just so happens that the controlled chaos style that worked for them against the Mercury best suits Tan White, whereas the safe approach better suits Bevilaqua.

Is changing the point guard really that big a deal?

Now I know a lot of people like Bevilaqua, so I’m not suggesting (yet) that White replace her at the starting point guard. I probably haven’t seen enough of the Fever or Bevilaqua to make that assertion. But it does seem like their last four games illustrate the point well – White is valuable to the team because she brings an attitude that the team sorely lacks.

So if that’s the case, then I have to wonder whether we’ll see a(nother) change in the Fever’s strategy after the Olympic break as they re-integrate Bevilaqua into the offense. I thought the best way to explore those possibilities would be to look back at their stats for the season. When I did, I found a few surprises that might lead to some answers to their struggles.

So what went wrong in Fever losses?

Since my hunch is that the problem is offensive rhythm, I decided to use synergy score as a starting point for analyzing the Fever. In its simplified version, it’s pretty easy to calculate synergy score: assists divided by field goals plus field goal percentage. It is the best metric I’ve found to statistically measure ball movement short of watching the games.

The average synergy score for the WNBA is 66.4 – which usually means a team strikes a good balance between passing and one-on-one play (as a point of reference, Detroit was at 66.5 as of last week). When teams get to the 80-100 game they’re generally moving the ball well and if they’re over 100 they’re playing extremely well. Below 60 means a team is just struggling.

In wins this season, the Fever have averaged a synergy score of 66.45. In losses, they’ve averaged 58.58. So it would appear that their ball movement has a sizeable impact on the outcomes of their games. They have yet to win with White coming off the bench, excluding the Liberty Outdoor Classic, which was a poorly played game for both teams.

But here’s what’s interesting about the Fever -- when Catchings was out for eight games at the beginning of the season and White started, they went 5-3 overall. They had an above average synergy score in six games and went 5-1 in those games. In fact, their three highest synergy scores of the season came at the beginning of the season without Catchings. The other two losses in that period were against Detroit and San Antonio, which are tough match ups to say the least.

Since Catchings’ return the Fever have only had six additional above average synergy games and gone 7-11. So the easy answer would be to blame Catchings for the Fever’s struggles. But I think that would be a premature conclusion – what she brings offensively and defensively is a huge asset to the team. And she also has the highest net plus/minus rating on the team at 5.4. In second at 3.1: Tan White.

To me this leaves two problems – either the coach Lin Dunn changed the offensive strategy to accommodate Catchings’ return or their starters just don’t complement each other well. It seems easier to look at the latter and I think there’s something there.

To check out how their players might complement each other, I returned to David Sparks’ playing styles spectrum. 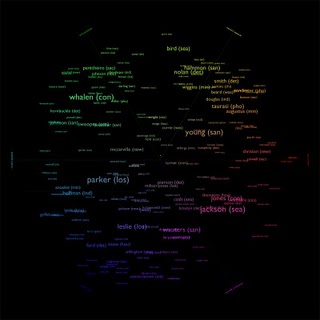 Something I've noticed about the Fever is that they seem to rely heavily on their starters. So the combinations in their starting lineups take on additional importance. And it appears like the answer might be that without White in the lineup, they just haven’t enough scoring threats to balance an otherwise talented lineup. Here’s their normal starting lineup with Catchings and player styles in parenthesees:

With Catchings’ scoring average down 5 points this year, she turns into less of a scoring threat and more of a distributor…but that simply duplicates what Bevilaqua does. Catchings has led the team in assists for the past few seasons so this isn’t terribly unusual, but without her scoring they’re really struggling. They only have one player that has consistently created their own shot in that lineup – Katie Douglas. That means even if Douglas has a great scoring game, she gets no scoring support.

Tan White is a second perimeter scorer, though a bit more of a distributor than Douglas. So when she replaces Catchings in the lineup, suddenly there’s a bit more balance.

However, the key is that White is also a good enough ball handler to get penetration and set up other players. Although White does not average as many assists as Catchings or Douglas, she’s creative enough with the ball from the lead guard position to make things happen.

I often count lost assists for players – passes that would have resulted in an assist if the receiver had made the shot -- and White has about three lost assists per game in the Fever games I’ve watched. She’s getting to the basket, but she’s also looking to set up teammates and that’s exactly what the Fever need.

With White’s ability to drive and score along, Bevilaqua’s ability to distribute, and Douglas’ ability to score, the roles are defined better and less redundant, which may lead to greater fluidity. But what may seem odd then is why they didn’t do better without Bevilaqua. That lineup:

Even though White is more of a scorer than Bevilaqua, when she’s playing the point guard spot and Catchings is not scoring, the team still struggles to win. It’s no coincidence that in their win against the Mercury both White (17 points) and Catchings (25 points) had strong scoring games in addition to being distributors.

Perhaps the Mercury game is a poor example because they are such a poor defensive team, but I think it does demonstrate that the team needs perimeter scoring to win. Thus far this season, that has come from White, but if Catchings manages to get back to form during the Olympic break, she could be the answer as well.

Just having a scoring mentality and the ability to create offense would be a huge benefit to the Fever. They are a much more well rounded team than Phoenix with Sutton-Brown able to score in the post and Hoffman being a versatile scorer. The big difference is that Phoenix comes out looking to outscore opponents whereas Indiana often comes out playing too cautious on offense.

What I think is lost in all the talk about Bevilaqua missing is that the other four starters on this team are likely equally, if not more important. Katie Douglass is one of the most consistent and versatile players on the team, Tammy Sutton-Brown’s inside presence is a force that has to be addressed by opponents, and neither of them has the highest Boxscore – that belongs to Ebony Hoffman. They have plenty of weapons and players who can run the team.

At no other time is the Fever’s caution more evident than at the end of games when they give the ball to Douglas to "manage the clock". From Fever media relations director Kevin Messenger:

In a decisive fourth quarter, with Indiana clinging to its narrow margin and a must-win situation hanging by a thread, Lin Dunn moved Katie Douglas to the point. Tan White was productive in managing the offense all night, but in crunch time, the veteran Douglas gave the Fever a calmness they sorely needed. It worked.