Crystal Kelly & Camille Little: What makes for a potential diamond in the rough?

Share All sharing options for: Crystal Kelly & Camille Little: What makes for a potential diamond in the rough? 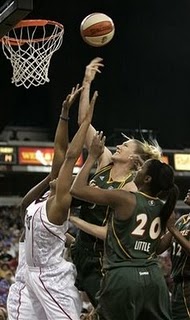 If you don’t pay close attention, you might miss how players like Kelly and Little impact the game. They go about their business on the court quietly and without making the kind of plays that make you go "wow". But when you look at the box score, you realize they have had an extremely effective and efficient game.

The Olympic break is an important time for players like Kelly and Little and not because they’ll be playing for someone in Beijing. Kelly is one of the more underrated players in a talented rookie class whose minutes have increased over the season because of her amazing efficiency. Little was traded to Seattle earlier this season and got inconsistent minutes prior to Jackson’s departure for the Olympics.

For these players, and other talented players who have shown great promise in limited minutes (e.g. Alison Bales, Sandrine Gruda, and Crystal Langhorne), this time is like the pre-season that most teams never got. It’s a chance to, you know, actually learn the plays and their team’s system. So while the spotlight will be on the players in Beijing on the world stage, the players who stand to benefit the most are these players who have shown considerable promise.

So I chose to watch Sacramento play Seattle yesterday because of Crystal Kelly (and Seattle has been web casted so little this season). Little was a "bonus" because she is already having a "breaking out" of sorts, but I had not watched her since she was inserted into the starting lineup. For me, Kelly and Little are just the types of players that are exciting to follow not only because it’s exciting when they actually do breakout, but also because it’s great to see hard working players get the job done off the bench.

What I think both players showed in the Storm’s 77-71 win is that they have an impact game by doing the simple things on the court really well. And I noticed something else that I think indicates a brighter future for Kelly – whereas Little production could be attributed to the strength of the Storm’s system, Kelly is productive as a rookie because she just seems to always be in the right place to make things happen. So I would bet that with experience Kelly ends up being the better player and I think that is demonstrated well with statistics and personal observation.

Finding "diamonds in the rough"

I first "noticed" Kelly when I did my original rookie rankings this season. She was the biggest surprise on the list, mainly because I hadn’t heard of her. I had even watched a few Monarchs games and she just didn’t stand out. And that is probably the classic example of a diamond in the rough.

Every year in every sport there are players just seem to improve dramatically from one season to the next and make you say, wow, where on earth did that player come from. Sometimes it’s attributed to hard work in the off-season or a rookie getting experience and learning the system. However often times, these players are quietly productive in limited minutes and we just don’t notice because they don’t do anything particularly spectacular.

Kevin Broom created a metric called diamond rating to identify these types of players in the NBA and Petrel at the Pleasant Dream Blog created an adjusted version called "Petrel Adjusted Diamond Rating", which is adjusted for WNBA minutes (you can take a look at the formulas here). However, though I’ve looked at the statistic for rookies from the 2006 class as a means of comparison and see reasonable results, Little is not a player that ranks very well on this metric.

I think the Kelly – Little comparison is a nice example of the two different types of breakout players, and maybe even which is more desirable. Kelly is the type of player that ranks quite well based on whichever version of the diamond rating you use and Little is a player who appears to have found the right fit on her third team in two years.

The best way to identify a diamond in the rough intuitively would be to look for players that are extremely efficient in limited minutes. Kelly fits that bill moreso than Little.

When Kelly is in the game, she makes things happen. As I described in my mid-season rookie rankings a few weeks ago, Kelly is among the tops among rookies in plus/minus and true shooting percentage. Even more impressive, Kelly led the league in true shooting percentage as of July 21, according to Kevin Pelton at the Storm Tracker blog. The way she puts up those statistics is even more impressive.

First, her true shooting percentage is so high because she is a very good free throw shooter, at 84% for the year. She also ranks number one in free throw attempts per 40 minutes (which is significant and I’ll come back to it later). And most impressive about Kelly is that her production leads to winning – her boxscore 1.51, which means even as a rookie playing 15.2 minutes per game, she’s able to make a contribution to the team’s success. There aren’t many other non-starters who can claim the total package she brings to the game.

At this point scoring is her forte – she ranks 10th among rookies in rebounding with 3.3/game, which isn’t spectacular (guards Alexis Hornbuckle and Candice Wiggins rank ahead of her). Not every rookie post player is going to be a Fowles, Parker, or Anosike, so it’s understandable that Little is not yet a great defender.

There’s nothing particularly spectacular about Camille Little’s statistics except that she has managed to nearly double her productivity across almost every statistic with twice as many minutes as a starter. Considering we should expect efficiency/productivity to go down with increased minutes, the fact that all her numbers have increased is impressive.

But the statistics only tell half of the story for these players. It’s the way they put up these numbers that’s impressive.

The key element of both of their games is good instincts. However, they each display those instincts in different ways.

Little’s increased productivity seems to illustrate a good fit with the Storm’s system. She knows how to play within that system and make an impact. She’s shown the ability to score all over the court, but is especially adept at scoring off of cuts to the basket. The most important thing is that she’s decisive with the ball – when she gets it, she looks to do something with it quickly and that allows her to be effective even when she’s not in the game very long.

In contrast, Kelly often seems to float around on offense as though she doesn’t quite know where she wants to go. But she flourishes when she improvises. She recognizes opportunities to contribute extremely well. Once she recognizes the opportunity, she knows how to take advantage whether that be off of a cut to the middle or establishing position in the post.

The big difference between Kelly and Little is that Kelly is a bit bigger and gets to the free throw line like a veteran. It’s not so much that she uses a whole lot of advanced moves down low, but she is just a physical player who looks to initiate contact once she gets the ball. The fact that she knows how to get herself to the free throw line without an intimate familiarity with the plays or the array of post moves that teammate Rebekkah Brunson has means that she’ll only be more effective once she has time to develop.

Another thing that might not stand out at first about Kelly is that she has quick hands. She had two steals recorded last night against the Storm and I noted an additional one. She got them just by being in the passing lanes or sticking her hand in the way of a ball handler’s dribble. That won’t make her dominant, but it is indicative of a defensive awareness that many normal rookies don’t have.

What both do well is play with energy, especially Kelly. She doesn’t seem to stop until the play is completely dead. And when you’re a bench player who gets limited minutes, that’s a huge asset to the team because it allows them to trust you during important stretches of a game. Kelly is a fighter down low who doesn’t back down and she has some good role models in Sacramento to help her develop.

Neither Kelly nor Little are players that are going to dazzle you with their ability to create points off the dribble or put 5 seconds worth of moves on a defender. But what they specialize in is being in the right spot at the right time.

What separates them is that Kelly produces the hard way – she makes a lot of hustle plays on both ends of the court, just finding her way to the ball when she finds the right opportunity. That she’s able to score at all when she just seems to float around on offense is equally impressive – it shows that she knows how to get things done even if she’s not well integrated into the team’s game plan.

What both players illustrate is that diamonds in the rough are hard to pick out without painting the whole picture. The questions I still have are why did Little not perform better in San Antonio or Atlanta (her PADR scores are negative for both)? What is it about the Storm’s system that allows her to thrive in Jackson’s absence? These questions are the type that are hard to answer statistically – Little’s improved performance could be due to better chemistry with the team, better relationship with the coaching staff, or similarity to an offense she’s known in the past. It’s hard to know.

It will be fun to see what players like Kelly and Little do after the Olympic break and whether they can show flashes of the future as their teams aim for the playoffs.