The Cost of Shock-Sparks Melee: Which Team Loses More From WNBA Suspensions?

Share All sharing options for: The Cost of Shock-Sparks Melee: Which Team Loses More From WNBA Suspensions?

After having a little more time to think about Tuesday night’s fight, it seems that the biggest cost to the WNBA after the fight might be the damage done to the playoff race after suspensions are dealt out.

The WNBA’s image might take a hit, but really the league’s brand is so weak in the mainstream consciousness that they don’t really have to worry about "re-inventing anything". In addition, the WNBA seems heavily reliant on its core fans for attendance and television ratings, and it’s hard to believe those fans will suddenly abandon their teams as a result of this incident alone. It might damage potential growth…but "potential" growth is immeasurable anyway so any claims about loss growth would be speculation anyway.

But with stars like Candace Parker, Lisa Leslie, and Deanna Nolan all involved in this fight, the Shock and Sparks will likely be playing shorthanded and without key contributors. When you consider that the teams are only five and two games out of the playoffs, respectively, any drop off in performance could lead to a trip to the lottery.

So the forthcoming announcement about who is suspended and for how long could do more damage to the league than the fight might do to the league’s image.

So how can we evaluate the impact of the suspensions in terms of wins and losses down the stretch?

What if we could actually measure a player’s contributions to her team’s wins?

Well, the Arbitrarian blog has done exactly that by creating a metric called "Boxscores". There are actually many other metrics available to estimate a player’s contribution to wins – Win Score/Wins Produced, Win Shares, Win Val, etc. But I’m using Boxscores for a very practical reason: David Sparks has provided us with up to date numbers for the WNBA. That counts for a lot considering the relative dearth of statistics available for the WNBA.

So in the spirit of "arbitrarianism", I thought it would be interesting to make a Boxscore analysis of the potential impact of the suspensions on the Shock and Sparks.
Suspensions

Thanks to a few Rebkell posters, I think we have an initial sense of who will receive suspensions. Although I don’t know how long each person will be suspended at this time, we can at least take a look at the potential effect on tonight’s games.

What we do know for certain is that Shock forward Cheryl Ford will be out for the season with an ACL injury, which is by far the most unfortunate outcome of this whole ordeal. But here are players likely to be suspended:

Players who left the bench get an automatic one game suspension, so that will affect Page, Bobbitt, Braxton, and Powell. Leslie’s involvement in the whole thing is a matter of interpretation – from some angles it looks like she threw a punch (which is an automatic suspension), from others she looks to just be falling backwards.

Humphrey was also up off the bench and stepped onto the court, although someone pulled her back to the bench. If the rules of leaving the bench are enforced as they have been in the NBA – which they should be – Humphrey is subject to the one game suspension as well.

So by these estimations, each team will lose the same number of players due to suspension. But the Sparks will likely lose 4/5 of their starting lineup and Detroit will lose four significant contributors. So for tonight's games, it looks like both teams have little chance to win.

But once the announcement is actually made, it might be interesting to use the Boxscores metric to make a more accurate assessment of the potential long-term impact of the suspensions.

Not all players are created equal...

From what I see in the video, Bobbitt, Leslie, Milton-Jones, Nolan, Parker, and Pierson could receive multiple game suspensions. Bobbitt is another tricky one – she definitely raised a fist to punch someone, but I did not see who she was going after. Again, it’s up to the league’s interpretation.

But here’s a brief description of how Boxscores work (for more, click here):

…the final steps in BoxScores calculation are extremely simple: merely find each player’s percent contribution to his team’s total sum of valuable contributions from all players, and multiply this by team wins:

We are left with an estimate of individual player value that combines individual contributions and team success, and allocates the most credit to those players who did the most to win the most.

Boxscores first caught my eye because Sparks created a great graphic that illustrates each player’s value to their team. This graphic is a week old, but still interesting to look at. 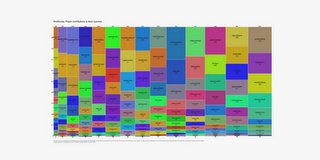 So here’s a list of the players likely to be suspended (plus Ford) and their Boxscores (highest to lowest):

The Boxscores of the individual players on a given team should add up to the team’s total wins (or something reasonably close). The best way to look at Boxscores is as a season cumulative statistic, but we’ll make due with almost ¾ of a season of data.

So let’s take the upcoming games tonight and look at the lost contribution for each team:

So tonight’s games will definitely be a test of character for both teams – I would expect both to lose with each missing most of their rotation. But what of the games after that? Might they be able to rebound and stay in the playoff race?

Implications for the Playoff Race

Detroit might be at a much larger disadvantage in terms of total lost contribution. They will definitely lose 15% of their win production in Ford for the rest of the season. They will probably lose another 13% for an extended period of time in Pierson. But it’s Nolan who will definitely be the biggest loss, contributing to 18% and intangible leadership – she definitely stands to be suspended for tackling Parker, but it’s hard to tell exactly how much time she will miss.

However, Detroit is five games ahead of the fifth place Mystics in the Eastern Conference with nine games left. Their Pythagorean projection would project them to go 6-3 over that period. If they don’t lose anyone but Ford and Pierson for an extended period of time, it’s conceivable that they could only lose 2 games off their expected win total, meaning they go 4-5 over that stretch (looking at their schedule, it’s feasible). So unless the Mystics or Sky win the rest of their games this season, it’s unlikely that we’ll see Detroit fall out of the playoffs.

Conversely, an extended absence from the Sparks players who threw punches (at least Parker and Milton-Jones) would almost certainly keep them from the playoffs – that’s 44% of their production gone. If Leslie and Bobbitt are also lost for more than 1 game, they can definitely look forward to scouting for the lottery.

Furthermore, the Sparks are only 3 games from last in the Western Conference. Their Pythagorean projection would have them going 6-4 over their next 10 games. Considering they should definitely lose Parker and Milton-Jones for extended time, they could lose 3-4 wins and go 2-8 over that period. Ending the season .500 could tank their playoff hopes with Houston surging and Phoenix always dangerous.

So given their situation and the potential severity of their losses, it’s the Sparks who lose the most in this situation. The Shock will probably end up making the playoffs and that’s all they need – a shot. But it almost seems unfair that the Sparks end up in the lottery again after just acquiring Parker in this year’s lottery.

A few caveats with this analysis – although it is interesting, it doesn’t account for changes in coaching strategy or the ability of replacement players to replace the lost productivity. However, I think it’s safe to assume that if you’re losing 60%-70% of your team’s production, you’re not going to find a replacement for that.

Second, you can never account for intangibles statistically. Losing team leaders like Leslie, Nolan, or Parker is as bad as losing their "production".

This formula is also based on NBA data and it is quite likely that assists are more valuable in the WNBA. It also doesn’t take defense into account, though Sparks justifies that in his description.

Obviously, the best application of Boxscores is in determining MVP, Rookie of the Year, or Sixth Woman of the Year candidates. But I will get to that sometime during the Olympic break when there is some WNBA down time.

One interesting application of the Boxscores is to look at a team’s relative balance. It would appear from the graphic and from the numbers above that LA is heavily dependent on three players whereas Detroit gets a much more balanced contribution from about 7 players (including Hornbuckle or Humphrey). That should certainly help them through these suspensions.

Mahorn’s involvement notwithstanding, comparisons were inevitable to the Pistons-Pacers brawl of 2004 because they occurred in the same building. To make any such a comparison is a gross simplification. The Ron Artest-induced melee was an unprecedented, dark moment for U.S. professional basketball because fans were involved. Lesser melees occasionally happen in the NBA. When they do, the spectacle is showcased on ESPN, suspensions are doled out, and the league goes on about its business. The same should happen here. The WNBA values competitiveness above all else, and emulates its big brother in a myriad of ways. The less flattering side of that emulation reared its head Tuesday.

…columnist Tom Haddock reminds us of the difference in how we perceive men’s and women’s sports. That disparity could lead to a differential effect on the league’s image:

But that's part of the bigger problem. There is a disparity between the way men's and women's sports are perceived. Clearly, they are viewed differently. We laugh when women fight. We are outraged when men fight. Until that changes, men and women in sports will always be different.

I’m still not sure I even believe this, but here’s one way to keep television ratings high: bring back Nancy Lieberman. It's a low-risk gimmick given the number of players missing...and I'm sure it would help boost ratings a little...

Semantics are important in the way we present incidents like this. There has been some discussion about whether calling it a "melee" is too extreme. However, this incident seems to be the dictionary definition of a melee. In case you’re as obsessive as I am:

Fight: To attempt to harm or gain power over an adversary by blows or with weapons.